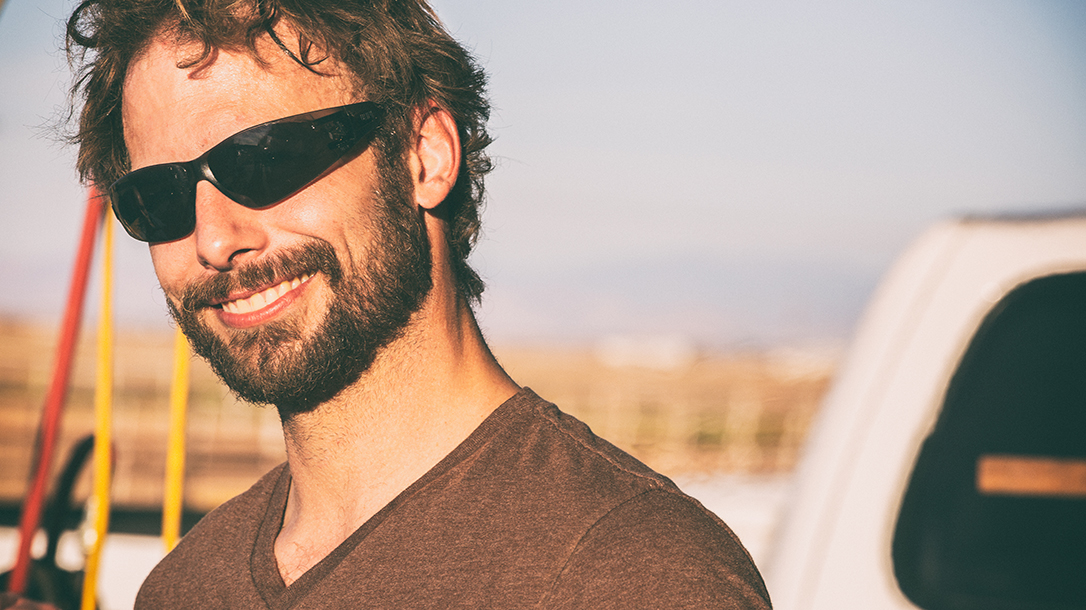 Travis Wuertz: ‘Forged in Fire’ Champ on Being a Master Bladesmith

Travis Wuertz is a master bladesmith and two-time History Channel “Forged in Fire” champion. What does that mean, you ask? It means he can take a piece of raw metal and create a fully functional, badass weapon in the time it takes you to figure out your Verizon Wireless bill. He has his bachelor’s in mechanical engineering and is currently working on his master’s in agricultural engineering. He looks exactly like Bo from the “Dukes of Hazzard” … but a hell of a lot smarter.

Travis Wuertz hails from Coolidge, Arizona and is the founder of Wuertz Machine Works. His shop is located on his family’s farm where he learned to make knives at the age of 13. His father Marvin noticed his son’s interest in knife making after taking him to a blade show. For his birthday, Marvin set up lessons from “The Western Bladesmith,” Tim Hancock, who resides in nearby Scottsdale. Since then, Travis has been forging and grinding knives and taking an interest in anything mechanical. He’s always had a passion for engineering and has turned that passion into hard work, producing some of the most unique prototypes in the bladesmithing industry.

With three generations of farmers behind him, Travis decided early-on to take a different route. The mechanical engineering degree paid off when he designed the TW-90 vertical/horizontal grinder, known to many as the “Cadillac of belt grinders.” It’s Travis’ brainchild, and it was an industry game-changer when it comes to finishing knives. We had the opportunity to sit down and speak with the mad scientist of knife making and ask him a few questions.

JB:With so many farmers in your bloodline, what made you choose a different path?

Travis Wuertz:My family has farmed in Coolidge since 1929. My great grandpapa moved here with four sons and they all started farming. I grew up on a farm. My shop’s on a farm, but I don’t enjoy making my living on a farm. I like designing and building cool shit.

JB:Some might say that ingenuity runs in your bloodline. Care to elaborate?

TW:Yeah, my family has done quite a bit of innovation in their respective fields. I look at my uncle, Howard. He was a big pioneer of sub-surface drip irrigation on multiple continents, and holds multiple patents on the equipment to go with it — a great uncle that did great things. My brother raises gourds and ships them all over the country. We all do something in a niche market and do it well.

JB:Have you seen an evolution in your knives since embarking on the journey?

TW: I’ve always had an interest in knife making since I was a kid. I took my first knife lesson from a phenomenal American Bladesmith Society Master Smith, Tim Hancock — just an amazing maker. He’s been responsible for a lot of people’s progression. I would watch a lot of master smiths and then I’d notice a sudden change. Usually the thing that changed was that they had attended one of Tim’s courses. He’s a big part of the design of my machines, forging presses and my knife-making methods.

I had a good foundation from a phenomenal instructor.

In recent years, the focus has been on progressing my methods and progressing the equipment. The method is something I value. I might not finish a whole lot of knives anymore, but I do like to think that I help a lot of people refine their methods to put out a better product, and to make a better living for themselves.

JB:What’s your favorite type of knife to make?

Travis Wuertz:I never thought I’d like to make a kitchen knife, but with advancing methods it became something that was very easy for me to do. Men and women both enjoy using kitchen knives, and I like making stuff that gets used. The grinders get used, and the kitchen knives get used. I don’t want to make a wall hanger. I might make something worthyof being a wall hanger, but if it can’t perform, I’m not interested.

JB:TW90 — what inspired you to create the premiere grinder that we have before us today?

JB:Are there any other crazy ideas running around in your head?

TW:The crazy ideas in my head don’t ever stop. It’s just a matter of which ones you let people know about. I gotta work through it about 75% before I consider an idea sharable. I’m working on a hydraulic forging press. I’m working on a mini-grinder with a motor that will fit in a coffee cup — with room for coffee. The finished machine will have two horsepower and weigh 20 pounds. I’m working on refining my forge and replacing another item in the shop, because when it comes to building stuff, square footage is everything.  A tool has to earn its real estate. Just because someone can afford a tool doesn’t mean they can afford the space to put it in. Every tool I design has to have merit.

JB:Now that you’ve competed in and won two episodes of the History Channel’s “Forged in Fire,” can you tell us about your experience on the show?

TW:“Forged in Fire” has been a great experience. I don’t think that the viewer really sees how good of a competition it is. It’s live action. When the clock stops, that’s it. The action is real. You get four hours to work. When they are in your home, it’s for a set amount of time and it’s supervised. They take pictures of the blade before they leave. There ain’t no working 24 hours or working straight through, or whatever. It’s regimented and it’s policed and you’re under time constraints.

If I didn’t know any better, I’d watch the show and say, “Ah, horseshit – they had all week!” It’s fun. You get multiple guys working on projects, all swinging hammers, all making different stuff, and that’s a good time. You know, in the knife-making, bladesmithing community that’s something people enjoy.

Yeah, it’s a competition, but shit, anybody there would gladly help you if you needed it.

And for me, it’s about the only time I make a knife anymore. It takes a lot more time to film these episodes than people think. You have to travel however many days to film rounds one and two. Then you fly back. Then the next day, they’re in your shop. That’s day one; then after five days, you fly back and they test the shit.  All said and done, it’s a solid three weeks out of your schedule. For me, my business doesn’t run if I’m not there. The last episode was filmed out here. It was 114 degrees before we even lit the forge. When I looked at the shop temperature, it read 130 degrees.

JB:How hard is it not to talk about the show before it airs, especially when you know you’ve won?

JB:What series of events led you to say, “You know what, I’m going to give ‘Forged in Fire’ a shot?”

Travis Wuertz:If I had to blame one thing for making me go on “Forged in Fire,” it would be my damn mouth. That comes from people saying, “Hey Trav, you think you could make a knife blade in four hours?” and I’d say, “Yeah, but it would be pretty hard to figure out what I would do with the other two hours.” You can only say that so many times before you decide to put in an application. So, I called up the show and said, “I’m Travis; I’m the guy you want.” Anyway, I put in the application, and the shit was fun!

Keep up with Travis at traviswuertz.com or on Facebook at @travis.wuertz If it’s in your budget to acquire one of his works of art, I’d highly suggest you do so.  He’s a good man with an undeniable Skillset … and a perfect match for our magazine.

Listen to our interview with Travis Wuertz on the Skillset Live podcast HERE or wherever you download your favorite shows!