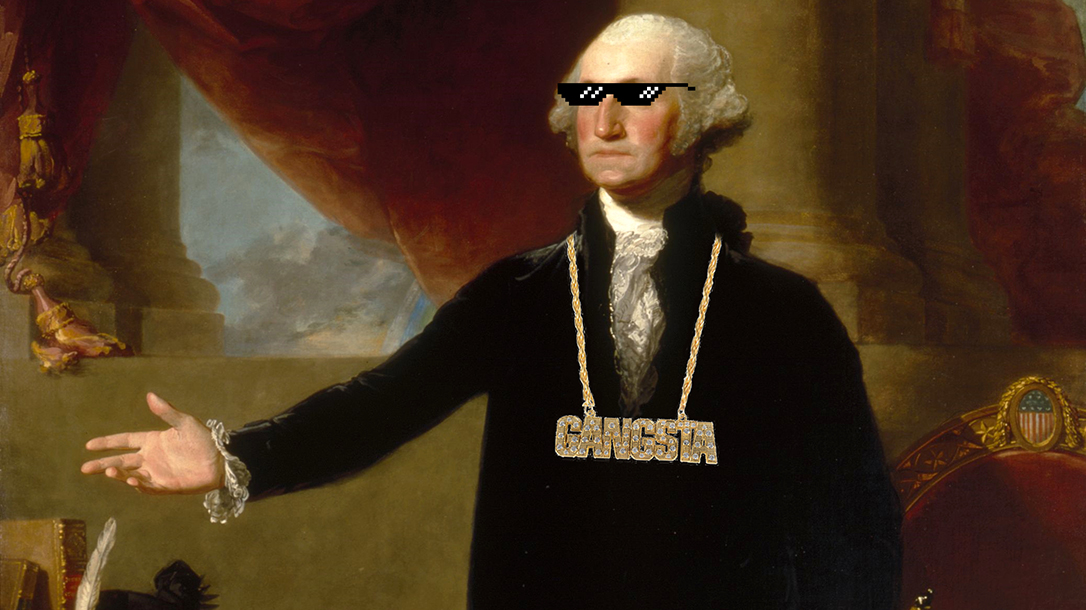 George Washington: the “American Cincinnatus,” the “Father of Our Country,” the “Town Destroyer.” He went by many nicknames; all of them were earned, and none of them were boring.

When it came time for Washington to answer the call of destiny, he was already a hardy war veteran, seasoned by small-unit combat in the wilds of Ohio. His unconventional experience and extensive military knowledge made him the perfect foil to the world’s top military power. To paraphrase Ben Franklin, Washington was a farmer who had never seen Europe but still sent five of the best British generals packing back to London in disgrace. Here’s why …

While no one knows exactly what killed him, we do know what it wasn’t, and it wasn’t the British. Or American Indians. Or any of the nine diseases he suffered from.

Suffering made George Washington a survivor. Painful diseases plagued him his entire adult life, including tuberculosis, dysentery, pneumonia, malaria, smallpox and diphtheria—all diseases that could kill mortal men. But not Washington; these afflictions only made him sit taller on his horse.

Even bullets seemed afraid to hit him. During the French and Indian War, he had two horses shot out from under him, and four bullet holes were found in his coat.

2. He Had The British Playbook The Entire Time

Although Washington had the most military experience of anyone in the Continental Congress, he had never led a large army before he took command of the Continental Army. However, he learned British leadership while serving under regular officers during the French and Indian War. At the 1755 Battle of the Monongahela, he even served with Thomas Gage, who was the top redcoat at the start of the American Revolution.

Perhaps more importantly, he saw the vulnerability of British formations when fighting on the American frontier. Like a Colonial Bill Belichick leading the New England Patriots of yore, he knew how the British thought and what they were going to do before they did it.

3. Washington Knew How To Take A Loss

A good general knows when he needs to live to fight another day. No one was better at that than Washington, and he didn’t care what the Continental Congress thought about it. He was able to salvage his army time and again, never giving the British the opportunity to get the big win and crush the Americans.

Washington’s superpower was making an orderly withdrawal toward a battlefield upon which he could win. When he had to abandon Fort Lee in New Jersey, he crossed the Delaware at Trenton a month later to give the Hessians a Christmas gift they’d never forget.

Then, again at Trenton a week later in the Battle of Assunpink Creek, Washington forced the British to attack via narrow bridges, allowing him to inflict heavy casualties. That same night, the Americans slipped away without the British realizing they’d gone just by leaving some campfires lit and a stay-behind force to make digging-in noises to fool the British into believing they were preparing for future action there. When the British woke in the morning, the Colonials were gone. The British followed the Americans to Princeton, where Washington brought the pain yet again.

4. This General Wasn’t Afraid To Get To The Front

Remember when we talked about musketballs being afraid to hit George Washington? That wasn’t just during the French and Indian War. Despite towering above the average Colonial at 6 feet 2 inches and weighing 200 pounds, Washington routinely dared the British to shoot at him. At Princeton, where the redcoats were firing from just 30 yards away, he rode up and down the front shouting dope lines such as, “Parade with me my fine fellows; we will have them soon!”

5. He Was A Damn Visionary

During the American Revolution, the Thirteen Colonies were fighting an outbreak of smallpox, and Washington was worried that it would take down his army as it had almost taken him down. Growing up in England where smallpox is endemic, most of the British troops had already had it and were immune.

Almost a full 20 years before, Edward Jenner had shown how cowpox could inoculate against smallpox, and Washington fought this biological warfare by inoculating the entire Continental Army through variolation, or using a tiny amount of the virus to create a mild infection. It was risky, but it worked. Deaths by smallpox in the Army dropped to 1% of its total death count.

6. He Supplied The Continental Army Through Sheer Tyranny Of Will

If you think Congress sucks today, imagine trying to wrangle supplies and money out of them during the middle of a war on your home turf. Historian Ron Chernow said that Washington became hampered by “crippling conditions … under a terrible strain that would have destroyed a lesser man.”

Valley Forge wasn’t a tough winter because it was cold. Hell, it was colder in Trenton when he crossed the Delaware. Valley Forge was hard on the army because Congress wouldn’t pony up the gold needed to pay the locals for their wares, so the locals sold them to people who had the cash: the British. However, Washington was willing to pay for the supplies himself if he had to.

7. George Washington Showed His Tender Side

It takes a confident man to show weakness when you’re the commander in chief of a revolution. But Washington did it to save the country because only he could. When he discovered a conspiracy to carry out a military coup by the Continental Army because they weren’t getting paid, he didn’t have the conspirators shot or try some deft political maneuver. Instead, he walked right into the lion’s den and delivered the “Newburgh Address,” a speech to end all speeches.

Immediately after his speech, he opened a letter from the Continental Congress to read to his men, and he took out his new his eyeglasses and spoke the immortal words, “Gentlemen, you will permit me to put on my spectacles, for I have not only grown gray but almost blind in the service of my country.”A number of the audience shed tears at their realization of Washington’s personal sacrifices during the war, and shortly thereafter, any talk of mutiny was abandoned. Sploosh!

8. He Wasn’t Afraid To Admit He Needed Help

Washington wasn’t a European-style general, and he didn’t have the experience to make his men European-style soldiers. At the time, no one knew soldiering and the training of troops like the Prussians did, so he called one in. Baron Friedrich Wilhelm Rudolf Gerhard August, Freiherr von Steuben, better known as Baron von Steuben, arrived at Valley Forge in 1778 to turn a group of ragtag patriots into a hardcore group of Prussian-style asskickers who could keep cool under fire while giving the British hell.

Likewise, when things looked bleak for the Continental Army, Washington took the advice of Marshal Jean-Baptiste Donatien de Vimeur, comte de Rochambeau, his French counterpart in North America. Washington had been obsessed with the recapture of New York, but the Frenchman convinced him that victory was to be found in Virginia. He was right. The French fleet chased off the British Royal Navy and left General Cornwallis trapped at Yorktown. Washington laid siege to the city, and Cornwallis was forced to surrender, turning the world upside down.