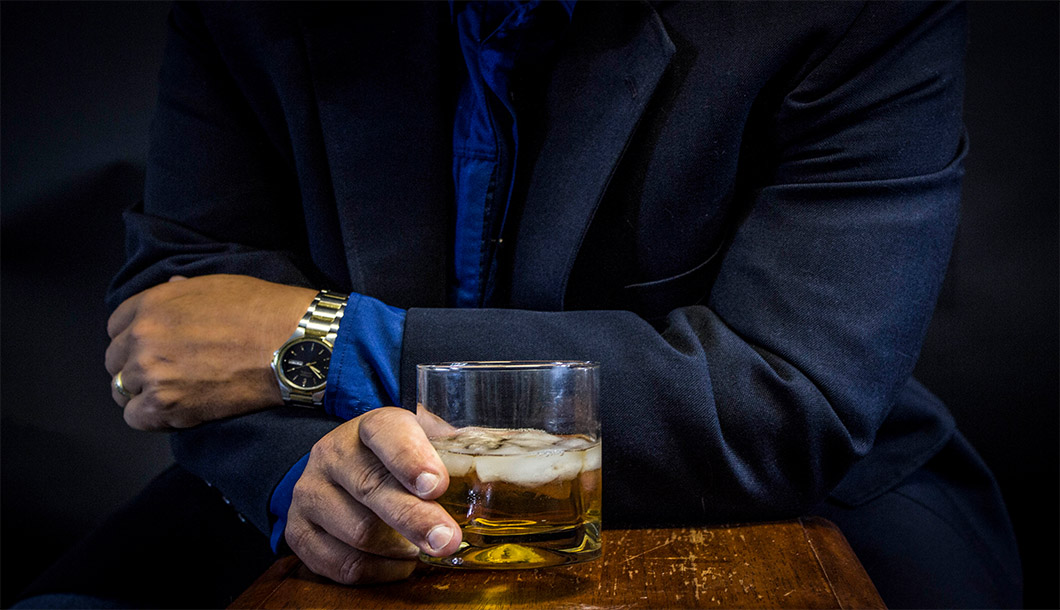 Whiskey A Go-Go: A Gentlemen’s Guide To The Perfect Evening

It’s Saturday night and you head downtown to try a new adult beverage establishment. You wander in and slide up to the bar.  Feeling adventurous and deciding to stray from your normal White Claw. You want to live life and drink with an air of sophistication. You hail the barkeep and in your most masculine voice, say, “whiskey.”  To your confusion he just stares at you.  After an uncomfortable silence, he leans forward and says, “see the man in black.”  And with that he moves to another customer.

Stunned, you begin to look around for this man. In the far corner you see a man sitting by himself dressed in black. He is staring at you as if he knows you have been sent to talk to him. You make your way to his table and pause as you arrive. The man smoothly releases the smoke from a cigar he is tending and tells you to sit down. Somehow, he has been plugged into the event with the bartender. He slowly says, “Son, Whisky making is an act of cooperation between the blessings of nature and the wisdom of man. If you want to enter the world of this magical elixir, you must educate yourself on its depth and width.” With that, class begins, and you are schooled on all things whiskey.

Ok, perhaps a bit overdramatic, but this bar scenario plays out quite often. People want to try whiskey but genuinely don’t know what’s what. In that the man in black is occupied, I will step in and lay out the basics of whiskey for you.

One of the first things people wonder about is the spelling. Is it whisky or whiskey? The answer is yes. The basic rule is that if the product is from Scotland, Japan, or Canada, it’s spelled whisky. If it’s made in the United States or Ireland, it’s whiskey. From there we can dig into the specific types. First on that list is Scotch and rightfully so. Scotch is generally a malt whisky from Scotland.

There are a variety of scotches as it is produced in five different regions. Each with its own special flavor. Another important thing to know is that the two major categories of scotch are blended and single malt. Scotch such as Belvenie are a single malt, while Johnny Walker is the product of several mixed batches. Single malts are more expensive for a reason, yet blends can be a good way to get started in Scotch. This area of whisky is certainly worth deeper study.

In all honesty, there are few things as American as whiskey. Yeah, I know, baseball, apple pie, yadda, yadda, yadda, but whiskey is central to classic American culture. In the old west, cowboys didn’t order a Gin and tonic. One of the most popular is bourbon. This is a type of whiskey with its’ own special classifications. In fact, the government has stepped in and provided us with an official definition.

For anything to be called bourbon whiskey it must abide by a Congressional resolution penned in 1964. It states that bourbon is “America’s native spirit.” It goes on to set qualifications. For the sake of space, I will just say google the details. It is worth the read. Inside the American whiskey world, we have a couple other notables. These include rye whiskey which generally has a little more heat to it in the taste, and Tennessee whiskey which is an offshoot of bourbon. Like bourbon it has its own specific guidelines and requirements to use that name.

Our friendly neighbors to the North have their own version of whisky. Canadian whiskey has a flavor profile similar to American rye whiskey. Yet some have no rye in the mix at all. One of the most popular is Canadian Mist. This jug-o-whisky has adorned homemade bars across North America for decades. While we are traveling, let’s head to Ireland. The land of a thousand drinking clichés certainly but also the makers of tasty whiskey. Ireland, like Scotland has some pretty strict controls over what they will allow to be called Irish whiskey. Jameson Irish whiskey seems to be a well-loved Irish import here in the states. It is a relatively smooth drink and a decent place to cut your teeth in the whiskey world.

Our last stop is Japan. While the land of the rising sun may not seem to be a go-to for whiskey, they indeed are. This is especially true with Japanese Scotch. I know…hold the phone. Scotch comes from Scotland, right? Well, technically yes, but the Japanese have their own version, and it is pretty close to what we find in Scotland. It all started when a gentleman named Masataka Taketsuru returned to Japan from Scotland in the early 1920s. He had spent time studying Scottish distilling and took it back to Japan with him. Because of that he became responsible for the birth of Japanese whisky, including the Yamazaki and Nikka brands directly. If you have not tried it, you are missing out.

Of course, there are versions of whiskey all over the world. Whiskey is a complex beverage with a flavor for just about anyone. Take some time to research the bottles that interest you. Then walk back into the bar, order your whiskey like you know what you are talking about. Toast the man in black and enjoy the experience.