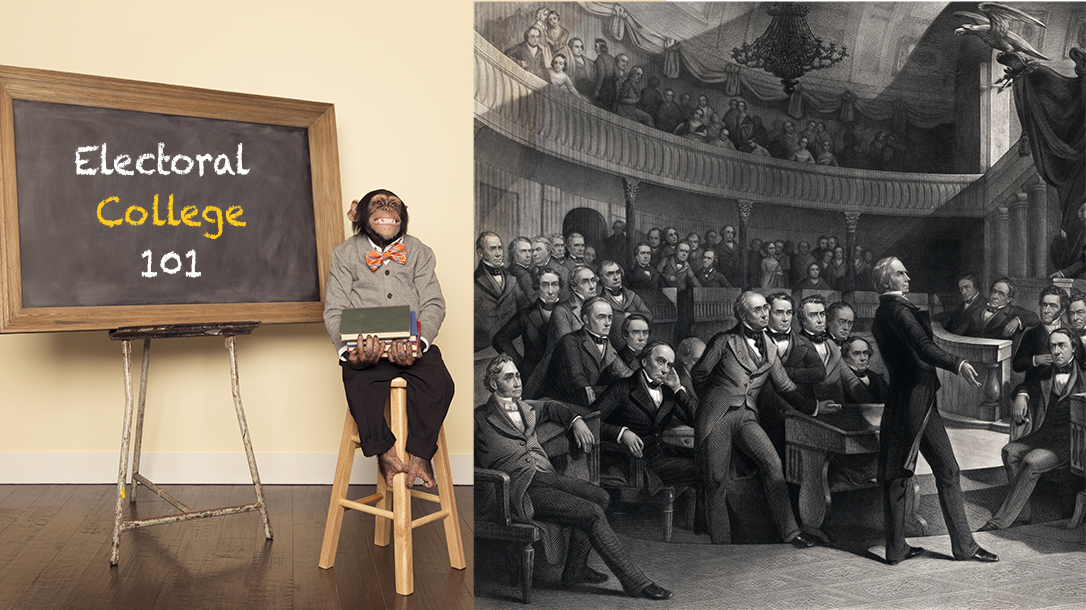 The U.S. Electoral College has long been a bone of contention. Many still don’t realize that our presidential election is actually not a popular vote. Rather, states are given the chance to choose “electors” who cast each state’s votes. The number of electors each state has is determined by the number of representatives the state has in both houses of Congress. Each state’s house seats are dictated by population, but the fact that all states have two representatives in the U.S. Senate means that less-populated states have slightly more power in the election relative to their size than larger states do.

This fact, has led to the election of the candidate who lost the popular vote five times in our country’s history. Each time this happens, those on the losing side call the Electoral College into question. Many ask what the intentions of the founding fathers were in setting up such an odd system. Why they wouldn’t simply leave it to a popular vote, and most importantly, whether we should continue with this institution.

The framers of our Constitution foresaw many things concerning how this governing document might play out in practice, but over time, other things have shifted. For instance, the presidency and the federal government in general are much more powerful relative to the states and counties than they intended. Similarly, the Electoral College was supposed to act more independently of the average citizen than it does. The Electoral College rose out of a debate during the Constitutional Convention. One camp thought popular vote was the best means for choosing a president, and the other thought the vote should be left to Congress.

Eventually, they arrived at a compromise. The states would hold elections to choose “electors” who would then cast their votes for president based on their expertise and judgement. Today, however, electors are chosen from one of the two major parties based on which presidential candidate won the popular vote in a given state. So, rather than electors being chosen by voters on their merits and then voting for a presidential candidate based on their best judgments, electors are chosen by party leadership, and they simply cast their votes in accordance with their state’s popular vote.

Those opposed to allowing Congress to choose the president predicted there would be too much political backscratching between the branches. And the president, once installed, would owe favors to others in government who elected him. Framers in favor of the Electoral College thought it would be insulated from such corruption. As Alexander Hamilton expressed in Federalist No. 68, the Electoral College would be difficult to corrupt given the short terms of electors and the fact that electors could not be chosen out of anybody holding public office. In addition, whereas congressmen are concentrated in one location, making them easy to target and corrupt, electors would be spread out across the country in their individual states. He also reasoned that the electors, being chosen directly by the people, would represent the people’s interests as effectively as a popular vote without the negative consequences of popular voting.

Those opposed to a popular vote had two major reservations. For one, they reasoned that the job of picking a chief executive would require specialized knowledge, insight and education that the masses simply didn’t possess. They thought the Electoral College struck a good balance between ensuring that the will of the people was paramount in choosing the president while also ensuring that the election didn’t devolve into a popularity contest that pandered to the lowest common denominator. This, in theory, would ensure that the position became filled by a qualified individual.

The second concern best represented by James Madison, the author of the Constitution. He noted the tendency of a majority group in a democracy to tyrannize the rest of the population. This reasoning, aside from the fact direct democracy is impractical in a large country, led to the republic, or representative, democracy we have today. Democracy has a positive, egalitarian kind of ring to it.

After all, how could the voice of the people be wrong? But in actuality, direct democracy inevitably runs counter to individual rights. Imagine a tribe of 10 people. Every member has a single vote to be cast on any given issue, and whichever group has the majority of votes wins. Everything is hunky dory until six members align their interests and decide to vote to take the life, liberty or property of the other four. The four, understandably enraged, while the six simply claim democracy has spoken!

In Federalist No. 10, Madison reasoned that when a party becomes a majority in a form of popular government, it is enabled to “sacrifice to its ruling passion or interest both the public good and the rights of other citizens.” If some systemic power is not granted to minority groups to preserve their interests, the worst urges of majority groups will trample their rights. Madison asserted that a system must be devised to balance the “spirit of popular government” and the need to limit the power of parties. For the presidential election, the system the founders devised was the Electoral College.

As Madison realized, a faction (or party) is much more likely to take hold of a particular state or area than to spread through the rest of the states. This means breaking the votes for the presidential election up geographically defends better against tyranny. The Electoral College also forces politicians to recognize the unique character and interests of each state and to seek broader support. Think about the cultural bubbles that exist in hyper-populated cities. Crowds of people living in close quarters develop interests unique to their situation that become reinforced culturally.

Given the trend of people moving from the countryside to cities, citizens in those pockets now outnumber those spread out over the vast remainder of the United States. In pure popular voting, citizens from these insulated pockets would then take their pick of president regardless of the implications for the rest of the country. And presidential candidates would only be concerned with pandering to those densely populated areas. With the Electoral College, people in different areas with interests of their own must also be considered, despite the fact that they are a minority in population. In a country where individual liberty is supposed to be paramount, it is important to limit the power of any group, especially a majority.

Is It Time For Change?

Although smaller states have slightly more power per population in the presidential election, it is important to remember that densely populated states still carry far more electoral votes. In 2016, California had a whopping 55 votes to Wyoming’s three. Also, the fact that electors are not directly chosen by the state’s voters anymore is already a shift toward a popular vote that the founders didn’t anticipate. And while the Electoral College doesn’t function in the exact way the framers intended (mostly because they didn’t foresee the two-party system we now have), it is still valuable. Eliminating the Electoral College would allow geographically small cultural pockets in the U.S. to dominate presidential elections completely.

It would mean no candidate would even consider the interests of residents in small states like Wyoming or Montana, and it would open the door to assaults on the Constitutional rights of those outnumbered by a majority party. It is important to remember that the U.S. is not and has never been a democracy. If the founders had believed a direct democracy to be advantageous or even possible, it would have been much simpler to build the Constitution around that. What they did instead, in an effort to try to preserve the spirit of democracy and to protect citizens from mob rule, was create an intricate system of checks and balances on many levels, including in the presidential election. Be wary of those espousing simplistic ideas who aim to tear those checks and balances away.