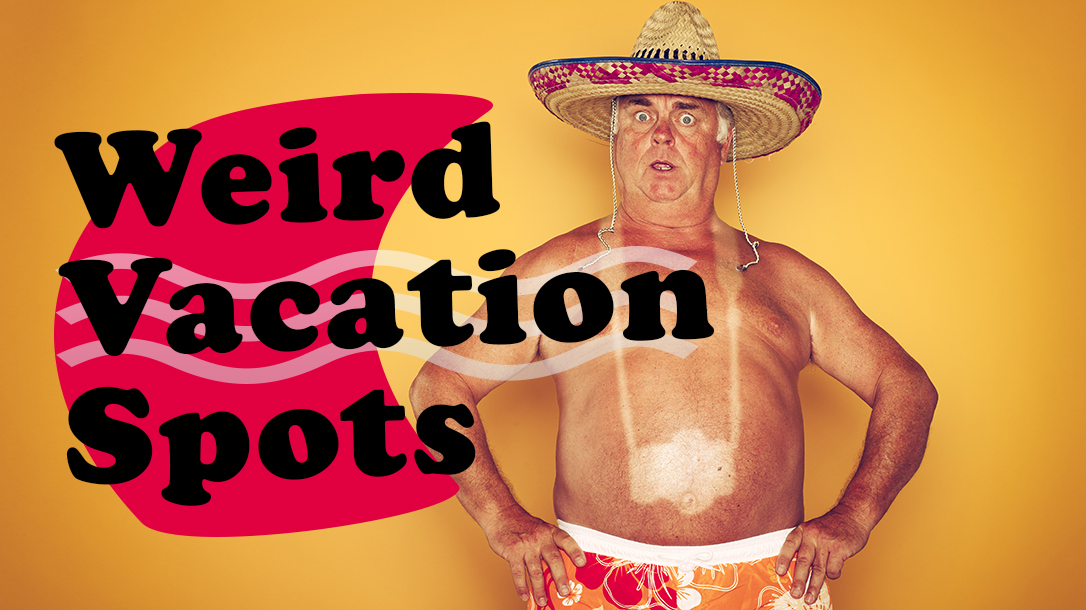 Summer will be here soon and if we’re all out of lockdown, it’s vacation time! Maybe you’ll be packing up the kids and wife and having a standard week at the beach in Florida. Maybe you will be a bit more adventurous and head out of the country to see the Eiffel Tower. Or maybe you’ll just be reconnecting with nature by hiking in one of America’s amazing national parks. No matter what you choose, the fact still remains that all these generic travel destinations are stupid. Lucky for you we’ve compiled a list of the terrifying and weird vacation spots you should book instead! Go on one of these trips, and it is a guarantee that Karen in accounting will never ask to see your vacation pictures again. And that is a good thing.

Pack Your Bags, We Leave Tonight!

So, what makes for a weird vacation spot? In our opinion, it has to be a combination of an offbeat location, a sense of danger, a bit of discomfort and a connection with the varied personalities of other humans, either living or dead. Make sure that passport is current and that you are up to date on your shots. Here are some spots not to miss during your next two-week liberation from the Initech Office Labor Camp.

Love them or hate them, for unknown reasons, these classic carnival performers have come to represent some of the creepiest parts of our psyche. Maybe it has something to do with Stephen King’s character “Pennywise” from IT, who set up a swinging pad in a sewer and had fun devouring children. Maybe it is the fact that serial killer John Wayne Gacy loved to dress up as one. Screw it, clowns are just spooky. If you feel that way too but still appreciate a good scare, then a stay at the Clown Motel in Tonopah, Nevada, could be your nirvana.

Charmingly situated next to a cemetery and full of thousands (yes, thousands) of clown figurines and pieces of artwork, this restful institution is off the beaten path. It is one of those places you either discover by mistake or else set out to find intentionally. Either way, if you end up there, your bad life choices are apparent.

We all know that crazy lady holed up in her apartment who feeds dozens of cats. Don’t you wish you could do something so that you no longer have to smell old, used kitty litter drifting down the hallway of your building? Well, invite that neighbor along on your journey to Aoshima, Japan, an island off the coast that houses a small fishing village and an even smaller population of residents, with stray cats outnumbering people six to one. Felines certainly rule the landscape there. They greet visitors, hiss at each other, fight over food and knock random stuff off shelves just to be dicks. And there is not just one “cat island” in Japan, there are about a dozen. So, be sure to bring your bottle of Cialis because it is estimated that there are hundreds of pussies wandering around town.

It is exactly like it sounds, and unless you have a Brazilian naval escort, this island of venomous delights is illegal to visit. That is not to say that someone as resourceful as yourself couldn’t find a way to hire a local to bring you and the family there in a boat, but just know what you are getting yourselves into. The island is overwhelmed by the golden lancehead pit viper, which has venom that quite literally melts the flesh of its victims. These cuddly little danger ropes have caused at least a few legendary “Murder Death Kills.”

When the island was inhabited by a lighthouse keeper and his family, they were attacked in their sleep after snakes slipped through the window and decided to have some human appetizers. As the family ran away, more snakes dropped out of the trees and continued to bite them. It wasn’t pretty. With more than one snake per square meter of land, this vacation will certainly keep the kids playing hopscotch while you and the missus look for a swim-up bar.

If you don’t have the wherewithal to get to the beach but still want to get the healthy glow of a tan as quickly as possible, head on over to the Nuclear Waste Adventure Trail and Museum in Missouri. With millions of cubic yards of dangerous, Cold War-era chemical waste and explosives buried inside this manmade mountain (thank you, Uncle Sam!), the whole trail is just one long staircase that brings you right up the side of the hill. If standing at the top of Mount Glowingskin (our name, not theirs) to admire the view doesn’t do it for you, you could always visit the adjoining museum, which shows the cross sections of the site. (This lulls you into a false sense of security that you are not rapidly becoming the next Toxic Avenger.) The upside? Little Johnny is now his own nightlight.

The Czech Republic is known for many things: the beauty of the countryside settlements that stretch back thousands of years, the star-like lights of Prague, and a seemingly never-ending supply of cam girls. Overlooked, however, is the fact that the Czechs absolutely love creepy stuff. Case in point is the “Church of Bones,” in which human skeletons cover almost every conceivable inch of space. Actually called Sedlec Ossuary and nestled in the suburbs about an hour outside Prague, this church looks like every basic death-metal album cover from the outside. Inside, however, you will be treated to a view of a massive bone chandelier and over 40,000 skeletons adorning every part of the church. It is sure to make for great family photos!

If any of these weird vacation spots sounded good, you should consider taking a tour of Chernobyl! Before you go though, make sure to pick up a copy of Skillset at OutdoorGroupStore.com!