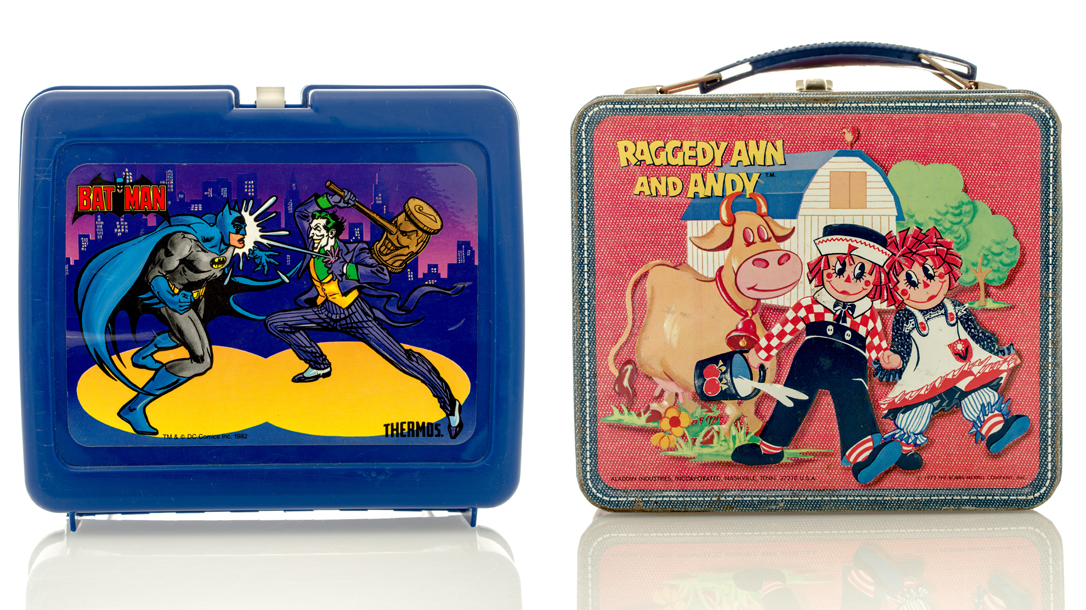 Vintage metal lunch boxes. Every kid worth his or her weight in salt in coolness had at least one. But who would have expected that their beloved metal or plastic sandwich carrier would become an object of their adult affection and maybe even be worth a couple of smackeroos?

The use of lithographed metal to produce lunch boxes began in the 1950s. Companies like Aladdin and Thermos made hundreds of designs throughout the 1960s, 1970s and 1980s. The last metal lunch box made was the Rambo Box in 1985. After Rambo, companies switched to making plastic lunchboxes with colorful decals. Plastic lunch boxes were cool, but vintage metal lunch boxes delivered a better wallop to the head when a chunky kid tried to steal your fruit snacks.

While characters like Mickey Mouse got their lunch box treatment in 1935, Aladdin Industries created the first children’s lunch box based on a television show. This box was based off of the show Hopalong Cassidy. The Hopalong Cassidy box originally sold for under three dollars. Today, a mint, unused specimen can fetch well over a thousand dollars.

So, what makes a vintage metal lunch box that collectible gold? Condition and rarity.  While there have been millions of lunch boxes sold, there are a finite amount of mint and unused specimens left. To be clear, not all vintage lunch boxes are worth money. Some aren’t worth anything at all. Metal lunch boxes and their matching thermoses were prone to denting, rust and abuse by ungrateful little assholes. Most collectors hate those kids and look for clean, rust- and dent-free boxes. Scratch-free images and clean edges are also a factor.

No collector enjoys opening a thermos only to find the smell of 40-year-old tomato soup. In my opinion, the sexiest lunch box is mint, unused and with its original thermos and tags. Tags are the little pieces of paper that connected to the handle by a piece of string. Some thermoses will still be wrapped in their original protective paper. Complete lunch boxes in this condition are generally the most desirable. Since they are typically worth the most money, chicks tend to flock to guys with huge lunch box collections.

Everyone Has Their ‘Grails’

One of the interesting things about collecting lunch boxes is grails, or those items of value often sought out for personal reasons. While collectors like to collect lunch kits that are nostalgic to their childhoods, many own boxes that are way older than they are. For example, I am way too young to have owned a Lone Ranger box in the 1950s, but I would today.

It’s pretty interesting what people consider their personal “Holy Grails”; it doesn’t always come down to monetary value. While some lunchboxes, like the domed Lost in Space box, command large amounts of money, some people are just as happy with a Strawberry Shortcake metal box.

In my case, I mainly collect boxes from the mid-1970s to the mid-1980s. One of my favorite lunch boxes is my Flash Gordon box. It’s unused and considered old store stock, complete with tags, papers and matching thermos. It would probably be considered a grail in most collections. Like many collectors, it’s hard for me to pick an overall favorite, so I also will collect a series.

My grail series would be Star Wars related. I own unused copies from all three original movies. There are two versions of the Star Wars box, along with two versions of The Empire Strikes Back and Return of the Jedi in my collection.

There are many places to buy single boxes and box collections. Some of the best places are eBay, Facebook Marketplace, flea markets, and toy and lunch box conventions. While garage sales may produce occasional gold, it’s pretty rare.

There are Facebook collector pages like Vintage Lunchbox Collector—HATER FREE that have over a thousand collectors who buy and sell daily. Some guys on the page will even dump entire collections in one shot. Buying “lots” is always a good idea. You may end up with extras, but trading boxes with other collectors is a part of the hobby. And trading is a great way to complete your collection.

My advice to anyone who wants to get into collecting lunch boxes is to start with something that has nostalgic value for you. And you don’t have to go mint right off the bat; you can start with less-expensive boxes from your childhood and always upgrade from there.

There are a couple books and price guides available, but prices can vary. The best way to gauge the true value of a box is on eBay. Search eBay listings that are completed and sold, not the asking prices. Dealers on places like Facebook are a crapshoot, and some are downright sketchy. Always try to look up a value prior to buying since many sellers will price gouge a beginner. A dealer’s motto is “Buy low, sell high.” So, be a smart shopper when collecting. There are some pretty amazing deals to be found.