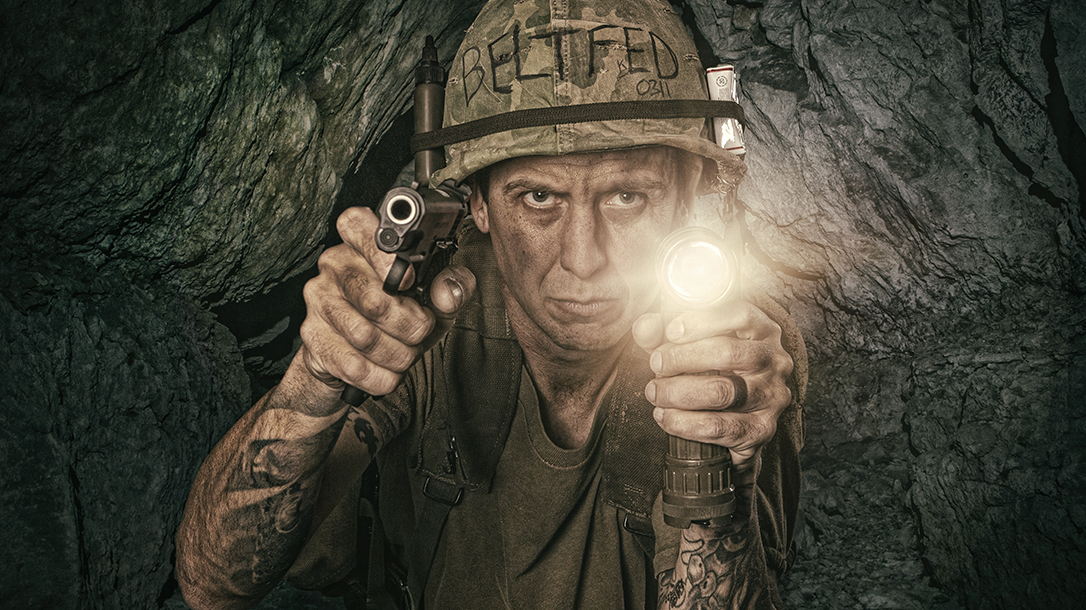 While infantry companies were lobbing mortars, laying down suppressive fire and maneuvering with H-harnesses, helmets, rifles and rucks, the T-shirt-wearing, bare-headed tunnel rats were crawling through earthen tunnels with angle-head flashlights in one hand and pistols in the other. Their mission was to wage war against an enemy deep within the bowels of Vietnam. These men of mayhem were usually of limited stature, but they possessed infinite courage and tenacity.

Eight-person teams within the 1st Infantry Division were the first cellar dwellers willing to traverse the over-150 miles of hand-dug, subterranean labyrinths built by Vietnamese communist guerrilla fighters in the Cu Chi district northwest of Saigon. They created their own tactics, even choosing their own gear and weapons. Fighting muzzle flash to muzzle flash against their embedded enemy, being responsible for hundreds of kills. They were the American tunnel rats of the Vietnam War.

The Tunnel Rats of Vietnam

Instead of having long, straight passages, the tunnel systems incorporated angles, which prevented light, bullets and shrapnel from traveling very far. Within the tunnels, trap doors often led downward to secondary and tertiary levels to avoid GI detection, and large, open rooms housed propaganda printing presses, hospitals, smokeless kitchens, armories and sleeping quarters. From these tunnels the enemy launched fire missions, and then they would disassemble the artillery guns and scramble below surface in teams, carrying each piece into hiding. In one discovery, the Vietcong had buried an M48 tank and use it as a command post. This system funneled North Vietnamese Army during the Tet Offensive as a part of sustaining continuous guerrilla tactics against the U.S. military’s ground forces.

The Vietcong also turned Mother Nature into weapons by using scorpion-filled boxes rigged with trip wires. They hid beehives staged at tunnel entrances, and bamboo vipers encased in the ceiling to drop on passing tunnel rats. The GIs also had to negotiate mines and makeshift, trip-wired grenades set throughout the darkness. Then had to be careful of blade-bearing sentries who would stab the invading soldiers.

Tunnel Rats and Their Weapons

When tunnels became discovered, the rats went in armed with their own preferences of weapons, including .38-caliber revolvers, .25-caliber pistols, sawed-off shotguns, folding-stock carbines, grenades, bayonets and boot knives. Some donned gas masks and used tear gas to create panic in the enemy to flush them out, while others battled the enemy blade to blade, bullet for bullet.

These units were given the autonomy to develop their own techniques to eliminate the embedded enemy. Tunnel rats employed cunning tricks, such as flashlights on sticks to draw gunfire while they triangulated on the enemy’s muzzle flashes. They would then tie ropes around the dead Vietcong and drag them back to the surface. The all-volunteer units’ esprit de corps was displayed through the creative patches they wore on their uniforms. They depicted armed rodents with phrases such as “Non gratum anus rodentum” (Latin for “Not worth a rat’s ass”)

Often, the enemy fled the approaching tunnel rats, leaving behind troves of intelligence documents. Tunnel rats located paperwork outlining the assassination plot against Secretary of Defense Robert McNamara. The assassins’ cell later identified, and its members then captured and executed.

Tunnel rats tested equipment built with great intentions, but not necessarily the best idea about conditions underground in Vietnam. One such piece was a head-mounted light with a mouth-switch on/off bite-control mouthpiece. This allowed tunnel rats to have free hands, but lights tended move when hit against tunnel ceilings and walls. Since the enemy instinctively fired at lights, a headlamp was a sure-fire way to receive a bullet to the brain. Rats preferred the flashlight in hand.

Tethered to surface units only by spools of commo wire on their belts spliced into conductor microphones. These underground GIs could remain in communication with their above-ground sister elements. However, the wires often became tangled on tree roots along the floors and walls. The earpieces blocked the most important tool the rats had in the dark—their ears. Communication often limited because tunnel rats needed to be able to concentrate on every external sound for survival.

While some relied on simple clicks on a radio with no talking, others preferred no radio at all. These men devoted their complete concentration to the sights, smells, touches and sounds they relied on to survive. Some simply taped the mics to themselves, so they had a constant one-way transmission to their support teams.

In a constant game of cat and mouse, the Army knew enemy scouts surveilled the helicopter landing zones, so they bugged PRC-25 radios with tracker beacons and staged soldiers clumsily dropping them from helicopters. The Vietcong scouts would retrieve them and inevitably return to the tunnels, allowing the tunnel rats to track them directly to their hidden entrances.

With scores of stolen souls to his name, Sgt. Robert Batten, known as “Batman,” was the backbone of one of the most lethal tunnel rat elements in Vietnam. He led a small band of eight hardened men from the 1st Infantry Division. Batten was the only sergeant on the Vietcong’s top-ten most-wanted list (the others were all generals). Batman thrived in the shoulder-scraping pathways, and trap doors that comprised the subterranean system in Vietnam’s Iron Triangle.

During a call out to a series of hot tunnels, the rats cleared passages for several days. On day one, they flushed out and captured five Vietcong. On day two, three enemy were killed, four were captured and 15 more fled to the surface. However, it was on day three, that Batten’s men pushed past him after he received an action-stopping injury. They pressed the fight even deeper and flushed over 150 enemy soldiers out of the tunnels. For his actions, Batman received his third Purple Heart and a Bronze Star.

On the final day of this operation, Batten removed his top, and he and his lieutenant entered the dark earth. His orders were simple: There is no rank underground, and never fire more than three shots when clearing rooms. With his flashlight in hand and his revolver ready, he prepared to dispatch any Vietcong crouching in the lightless passages. As he approached door after door, Batten fired three times and then changed revolvers with his lieutenant who reloaded the freshly fired weapon.

At the third door, they switched positions, and the lieutenant, now at point, pushed open the trap door above him. Before he could extend his arm into the blackness and fire three shots blindly, the trap door slammed shut overhead. Quickly, the door opened again, and a fragmentation grenade dropped into the lieutenant’s lap. The two tunnel rats scurried away and flattened themselves; however, the shrapnel shredded their legs. Nevertheless, they managed to crawl back to the entrance, and afterward, safely medevacked. Both men fully recovered and each received a Bronze Star for his actions below ground that day. It was Batten’s fourth wound on the battlefield. The higher powers sent him stateside after serving three tours in Vietnam.

As a Cuban teen, Pete Rejo once took his father’s .38-caliber revolver and shot at the incoming Castro communists who were ousting the Batista government. Only a few years later, he found himself in Vietnam, the only place in the world where he was rewarded for killing communists. On three separate occasions there, he stepped on pressure mines and miraculously they did not detonate. Afterward, he dug up each mine and disassembled it.

Assigned to the tunnel rats of the 1st Infantry Division, he lived to hunt the Vietcong beneath their own backyard. He survived multiple engagements, killed many enemy, and once saved two wounded tunnel rats. Later, with no gas mask, he created a partial tunnel by hacking at a wall with his knife. After avoiding an armed NVA soldier, he strategically placed shaped C4 charges inside this wall. Rejo then exited and detonated the C4, resulting in the collapse of the tunnel system and the killing of the entire enemy element there. After the tunnel rat teams disbanded following extensive U.S. bombing campaigns that destroyed many of the Vietcong’s tunnel systems, Staff Sgt. Pete Rejo flew home at the end of his third tour in Vietnam and became a U.S. citizen.

When it came to the tunnel rats of Vietnam, greater height did not equal greater heroism. These ferociously compact men of courage were a spear that drove into the heart of the Vietcong and NVA operating in Vietnam’s Iron Triangle. More about their exploits are in the pages of The Tunnels of Cu Chi by Tom Mangold and John Penycate.

If you want to know more about warfighters in Vietnam, check out our article on the Real Walking Dead! You can also pick up a back issue of Skillset at OutdoorGroupStore.com!