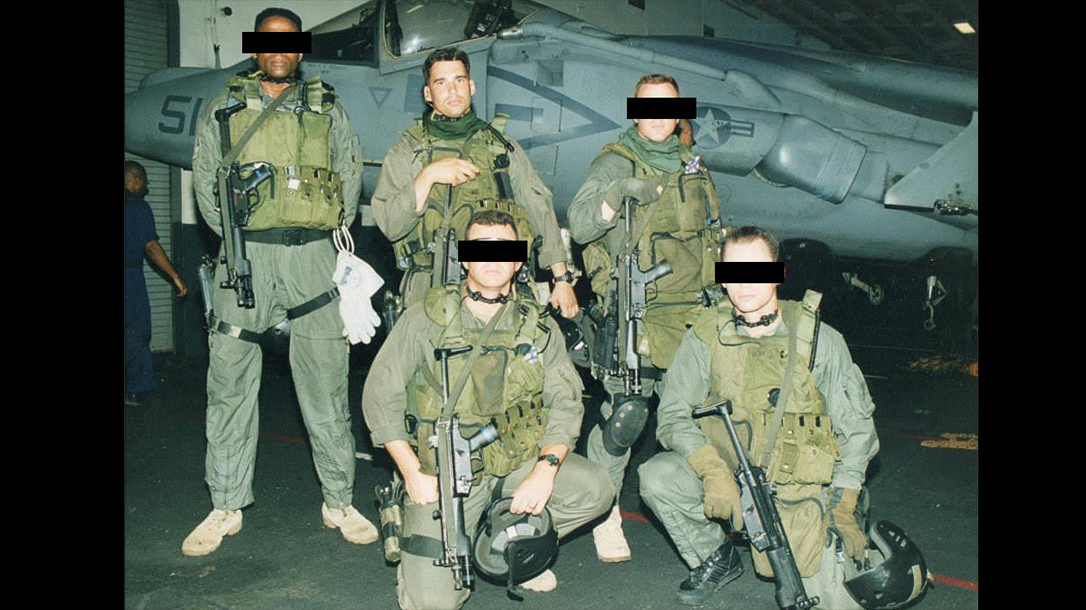 Perseverance (noun): continued effort to do or achieve something despite difficulties, failure or opposition.

Master Sgt. Davey Lind is no stranger to the above definition. This Reconnaissance Marine has endured some of the toughest training the military has to offer and has lived up to the lesser-known, internal motto of the Recon community: “Suffer in silence.” Everyone hears about the pain and agony a Recondo goes through, but these men are silent professionals, and mission always comes before self.

But what happens to these warriors when the battles are over? Some scars never heal, and in the case of Lind, war can permanently change a man. The most desirable trait of a special operations Marine is his ability to rise above the doubt that suffocates most people’s minds to find instead another way to win. This is exactly what Lind has done. Realizing that his days of fighting in foreign lands are over, he has taken on a new challenge on the grappling mats. The road is definitely never easy, but as the Recon Creed in part states, “To quit, to surrender, to give up is to fail. To be a Recon Marine is to surpass failure …”

Humble Beginnings Of A US Marine

SS: Growing up, what kind of a kid were you, and what made you decide to join the Marines?

DL: What kind of kid? Good at sports (OK, I guess) and bad at grades. In today’s school system, I’d probably be given an adjusted learning program. I knew at a very early age that I would go into the military and then law enforcement. I never wanted to be in the Air Force or the Navy, so it was the Army or the United States Marine Corps. As I got closer to enlisting, the Marines’ history, tradition and culture is what made me decide.

SS: You ended up going the Reconnaissance Marine route, which is the most physically and mentally demanding job in the Corps. Why did you undertake this challenge?

DL: I went to 3rd Battalion, 7th Marines and was on my first deployment when I was 19 years old. The scheduled unit deployment of six months took nearly an entire year (of which I spent six months in the Philippines). During that time, I saw the “more work, less BS” ethic of not only the sniper platoon (STA), but also of the Reconnaissance Marines that were there on rotation as well. As my career progressed, I was assigned to an STA platoon, and then I had a tour as an instructor. I knew that if I returned to the fleet/regular Marines forces—especially as a

sergeant—I would highly likely be doing something that I did not want to do or would find enjoyable. The first thing I ever failed was my initial screening for Recon … very, very humbling, and that is what made me return to be successful. January, 1996, I passed my second indoc and was later assigned to 1st Force Recon Company. It was the best decision of my career, and it set me up for success in the future.

SS: You have endured multiple combat deployments across your career, but it was one vehicle patrol that changed your life forever. Tell us about June 14, 2007.

DL: June 14, 2007, my vehicle struck an IED, and that led me down a new path. I was immediately aware of my limb loss. Well, I was immediately aware of my right leg being gone. I never lost consciousness—not until later in the OR—and I was able to open my door. I was sitting right-front seat as vehicle commander, and it took everything for me to open the 350-pound door with my shoulder.

Once on the ground, I was trying to crawl away from the vehicle. Fire and homemade napalm were very real threats from enemy tactics at that time in Iraq, so even though I was in pain, I was still aware of my tactical situation. Only when I rolled on my back in an attempt to get more distance from the vehicle by pushing with my left leg was I aware that I would be a double amputee.

It was completely, totally overwhelming. I was devastated, angry, scared and then angry again. I had all these thoughts in about a nanosecond. Of course I also thought about ending this life and seeing what was on the other side. My M4 was bent in half, as the blast had thrown me against the windshield and front of the dash. But my M9 pistol was still operational, and I again, for a nanosecond, considered ending it all. I then pushed my thoughts out of my head, looked up at the sky that was crystal clear and majestic, and I said, “Whatever path you have for me, I will walk it.”

And that is what I have tried to do ever since—walk the path in front of me and do all I can to inspire those around me, especially my children, to give it all they have.

SS: Let’s talk mental toughness. Within moments, your life changed forever. Knowing that you would now be a double amputee, how hard was it to stay strong and to regain a positive mental attitude? During your journey to walk again, what things motivated you to keep pushing the limits?

DL: Originally, I was given 10-12 months to be able to walk again, which is completely soul-crushing information. I left Bethesda/Walter Reed to come to San Diego, and I was met by close friends and family. I had my dear friends getting married, and they wanted me in the wedding. Surely I was not going to do it, but they insisted that I wear my blues and go down the aisle in my wheelchair as part of the wedding party. No way! I hated the wheelchair and worked hard to be able to walk down the aisle. Their wedding was Aug. 25, 2007, and I was able to get strong enough physically to be able to walk in both prosthetics two months from the date of my injuries. On Aug. 14, 2007, I took my first steps in both prosthetics and have been walking ever since.

SS: You have recently started another journey in your life. You have been training in Brazilian Jiu-Jitsu. What made you decide to dive into the world of submission grappling?

DL: My corpsman, Brian Thurmond, had started his own journey, and as we talked about “being harder to kill,” he kept suggesting that I start BJJ. Then he eventually pushed me toward the We Defy Foundation, and that was when things changed for me. I went to my first class on a Thursday night. I was sore, I was tired, and I was challenged. Like so many people, what started out as a hobby has become that thing I spend most of my time thinking about. I look forward to classes and surprising people with either my strength or the four basic moves I know!

SS: Even though Brazilian Jiu-Jitsu uses some strength, it mainly focuses on leverage, calculating and countering your opponent’s movements, and the use of all four limbs for submissions. Being a double amputee, how difficult is it to adapt since some of your tools are gone?

DL: I will simply say that life is not fair, and the challenges of the mat or life are pretty much unpredictable. I jokingly say that I’ve never been heel hooked! I do like that I make the coaches better because they have to think of ways to adapt to my limitations. It’s clear I also like that I am constantly learning. I can do this for the rest of my life and still won’t know everything.

SS: Do you feel camaraderie on the mats like you did in the Marines?

DL: Absolutely, it has the same amount of smack talking and ribbing each other. It was the first counseling session I had as I went through my divorce, and I was surrounded by people who had similar experiences and could offer perspective. I still believe wholeheartedly that the lessons on the mat are about fighting, not giving up and focusing on what you can do. The friends I have made in the gym and on the mat are invaluable to me—just like I had when I was active duty. Sharing a physical challenge with like-minded individuals or a team is valuable without measure. It is simply a great and worthy experience. I look forward to seeing the regulars, and I also look forward to meeting new people. Overall, it is just a great experience!

SS: What are your goals in the world of BJJ? Would you ever want to compete?

DL: Like so many others, I am sure I started out with the goal of belts and promotions, etc. What I quickly learned, however, is that I started super late—but I started. So, now I am just enjoying the journey. I know that sounds like a Hallmark card, but it’s the truth. On the absolute worst day of the past year for me, I literally wiped my eyes, drove to the gym and got beat up. One and a half hours later, when I walked out, I was better. I was calm, clear, refocused, and had a renewed energy.

I have set a goal of competing, but that goal is probably premature and more than a little aggressive. Therefore I am hopeful to hit my personal goals by the end of summer, and this will only come with more mat time. Right now, when I “roll,” I am working

with people who take it easier on me than they could. I need to get some full-speed, full-send grappling sessions out of the way and still have the composure not to put myself in situations where I am immediately vulnerable. I am focusing almost exclusively on my weaknesses, and there are many!

SS: On a final note, you have shown the world that a disability is not a deal breaker for a US Marine. You have proven that no matter what physical situation you are in, where there is a will, there is a way. What advice do you have for the person on the fence about beginning to train in this martial art?

DL: Quite simply, start! There is no perfect time, only time—and what you make of it. Today, make the time to start something you have always wanted to do and then practice with intention. CrossFit, golf, BJJ—it doesn’t matter. In the words of my Cuban people, “¡Dale!” (pronounced “DAH-lay”), which translates to “Let’s go, get it moving!”

Follow Davey Lind’s journey and support the organizations that are going above and beyond to help these incredible warriors. Celer, silens, mortalis ..