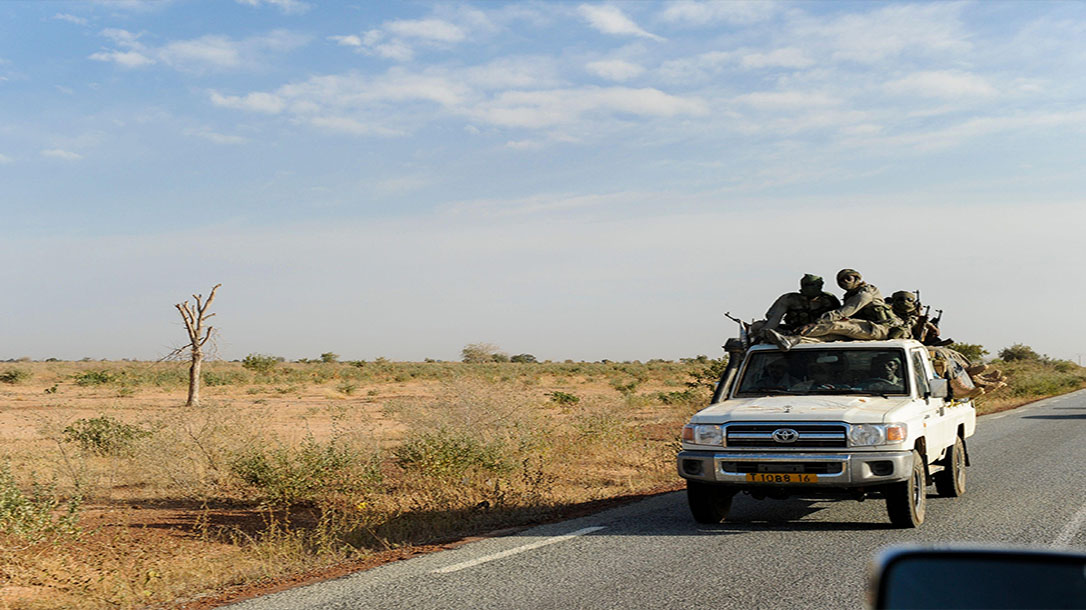 Afghan falls. A drug cartel overruns a border town. A terrorist cell infiltrates a desert stronghold. There might be a clip of it on the evening news or a snapshot or two from an overseas report. Still, the perpetrators of whatever dastardly deed will be riding high on a Toyota—sometimes it’s a Land Cruiser. Still, more than likely, it’ll be the veritable Hilux, Toyota’s durable pickup truck. Buckle up everyone and hold on, it’s time for Toyotas of war!

Over the years since its introduction as a compact pickup truck in 1968, it was named HiLux, Hi-Lux, and Hilux. Still, no matter the name, the Hilux is entering its eighth generation as one of Toyota’s most popular vehicles. Known in the U.S. merely as a pickup truck or sometimes the SR5 and similar to the Tacoma. It became a popular off-road vehicle, known for its ruggedness, simplicity to work on, and fuel efficiency. Since its debut, Toyota has produced over 17 million units in production facilities worldwide. While no longer made for Japanese consumers, they are still a very popular truck in far-flung regions of the globe.

Its reputation as a durable and reliable truck increased over the years until that reputation became synonymous with the truck’s lore to the point that it is widely believed to be indestructible. The trio on Top Gear repeatedly abused a 1988 diesel N50, only allowing its repairs by tools the truck came with, and despite massive damage, continued to run. A popular YouTube contributor, WhistlinDiesel’s Cody Detwiler, subjected a 1989 Hilux to ever escalated durability tests, where it continued to prevail until completely obliterating it during a 10,000-foot drop from a helicopter.

A Hilux was the first vehicle to travel to the magnetic North Pole (thanks again to Top Gear). A modified trio of Hiluxes became the first 4x4s to reach the geographic South Pole. It was even Marty McFly’s dream truck in “Back to the Future” . Coincidentally, the sole surviving truck from the movie became a drug mule in Mexico. They are the vehicle of choice for the Red Cross and the United Nations. Which in turn makes them easy to acquire in countries where the Red Cross and United Nations operate.

Reporting from the breached doors of the Afghan presidential palace when it was first overrun by the Taliban in 1996, an India Today article commented that the “ammunition-laden Toyota Hilux trucks” were at the forefront of the invasion. The New York Times added in 2001: “From their Land Cruisers and Hiluxes, the Taliban were ready to leap down and beat women for showing a glimpse of the ankle.

The Hilux became the icon of the Taliban, and Al Qaeda well respected them for their durability and intimidation factor. So much so that when people saw a Hilux, they knew instantly they were dealing with Al Qaeda. In 2021, at the request of the Free Syrian Army and the Syrian National Coalition, the U.S. State Department sent dozens of Toyota trucks to the rebels as part of a non-lethal aid package.

Due to this durability and reliability, the Toyota Hilux, along with the Land Cruiser, has become popular among terrorist cells and militant groups as an NSTV (non-standard tactical vehicle, aka a “technical”.) A light improvised and readily available vehicle that’s easily adaptable to a gun truck, rocket launcher platform, and a variety of other needs in war-torn regions as a quick and mobile “cavalry” but also an element of prestige and power. Writing for Psywarrior.com about Somalia in 2011, Herbert A Friedman described such activity: “The technical is the most significant symbol of power in southern Somalia. It is a small truck with large tripod machine guns mounted on the back. A warlord’s power is measured by how many of these vehicles he has.”

In fact, the Hilux has been so omnipresent in insurgent fighting, border conflicts, and warring tribal neighbors in the Middle East and Africa that an entire war was named for Toyota. In 1987, the conflict’s final phase between Libya and Chad became known as the Toyota War. Due in part to both sides’ heavy reliance on Toyotas as troop transports, light strike vehicles, and gear haulers.

Every time, it seems to be a Hilux, but why? Nobody knows officially. In 2015, the U.S. Treasury Department investigated why so many Taliban terrorists are behind the wheels of Hiluxes. Lukman Faily, the Iraqi ambassador to the U.S., told ABC News in 2015 that Iraq believes “ISIS has acquired hundreds of brand-new Toyota vehicles in recent years from no clear source.” The U.S. Treasury Department couldn’t figure it out. They asked Toyota directly, and they didn’t know either. “Regrettably, the Toyota Land Cruiser and Hilux have effectively become almost part of the ISIS brand,” Mark Wallace, a former United Nations ambassador and the current head of an anti-terrorism non-profit, added.

According to former Deputy Assistant Secretary of Defense for the Middle East Andrew Exum, the Hilux is “the vehicular equivalent of the AK-47. It’s ubiquitous to insurgent warfare.” They’re easy to find, work on, and inexpensive to purchase, either legitimately or on the black market.

This assessment and its continued popularity don’t sit well with Toyota, which has made public its position of dealing with terrorists and paramilitary organizations more than once. In 2015, the then director of public policy and communications for Toyota, Ed Lewis, stated that Toyota has a “strict policy to not sell vehicles to potential purchasers who may use or modify them for paramilitary or terrorist activities.” This year, Toyota has instituted a policy that new Land Cruiser owners sign a contract that forbids them to resell their vehicles for one year after purchase to help curb the grey market for Toyotas in the Middle East and Africa.

Though Toyota has policies in place that help keep their trucks from becoming military technicals. They don’t sell directly in countries like Afghanistan and Syria, for example—it is a losing battle. This doesn’t help the continued stream of illegal imports of stolen trucks and black market sales. Whether this allows sales or hurts them cannot be known. Still, the world over is seeing the benefits of Toyota Hiluxes and Land Cruisers on the nightly news, laden with gear, bristling with guns, and prospering in the harsh, unforgiving environs of the Middle East. Toyota makes a truck that can survive most of what people can throw at it, be it a grenade, an off-road adventure, or a bag of groceries. It’s a damn good truck.

For more on this tough little truck and its involvement in conflicts all across the globe, visit toyotasofwar.com