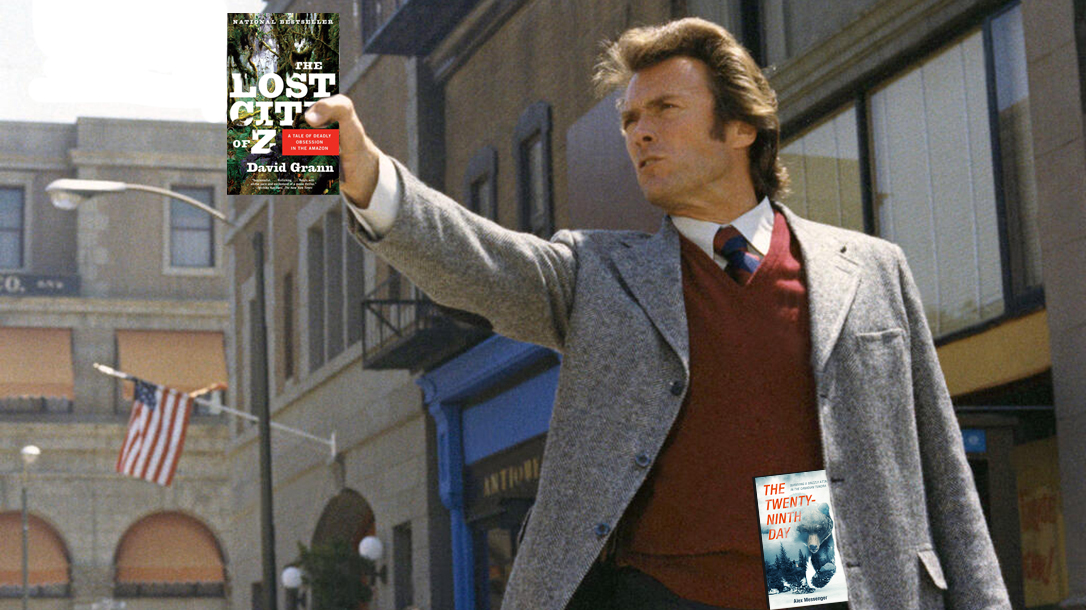 Summer is here, and whether you are heading to the beach, mountains or just chilling out by the pool, a nice book offers plenty of escapism. Fans of Skillset may be looking for something in the “tough-guy” genre, so here are a few excellent reads that feature adventure, survival, crimefighting and even a bear attack.

The Perfect Storm: A True Story Of Men Against The Sea, By Sebastian Junger

Those who have only seen this film are missing a lot. This 1997 book tells the story of not just a massive storm, but also the tough-as-nails Gloucester, Massachusetts, fishermen caught in the massive maelstrom that struck the Northern Atlantic in October of 1991.

Fishermen have been the frequent subjects of storytellers, from Hemingway’s The Old Man and the Sea to the Discovery Channel’s Deadliest Catch. Junger’s tale is among the best. The author actually moved to Gloucester to recreate events using interviews, meteorological data and local history. The key focus is on the six-member crew of the Andrea Gale as they head straight into the killer storm. Scratching out a living on a fishing boat isn’t easy, and this book does a masterful job of depicting life on the sea.

Alive: The Story Of The Andes Survivors, By Piers Paul Reid

Surviving a plane crash is unlikely enough. Throw in snow, ice, mountains, extreme conditions and a lack of food, and this story becomes a tough-guy survival classic. Alive focuses on the 1972 crash of an airplane carrying a Uruguayan rugby club. Stuck in the snow-covered Andes during freezing conditions, the survivors resort to eating human flesh for survival.

Morgan does an amazing job of crafting a tale that has readers really envisioning what happened and commiserating with the survivors. This is not an easy task with so many characters to consider. It is truly an inspirational read that perfectly captures the human will to live.

Killing Pablo: The Hunt For The World’s Greatest Outlaw, By Mark Bowden

Before Narcos became a huge hit for Netflix, Black Hawk Down author, Mark Bowden, dove deep into the hunt for cocaine king Pablo Escobar. This book chronicles Escobar’s numerous crimes, which went well beyond the drug trade. Those include assassinations, kidnappings, an airplane bombing and the backing of an attack on Colombia’s Palace of Justice.

After founding the Medellín cocaine empire, Escobar became one of the richest men in the world. A key focus of Bowden’s book is the attempts by American special forces and Colombian agents to capture the outlaw. This also includes the arrival of the vigilante group known as Los Pepes. This group had one mission: to kill anyone associated with Escobar—and hopefully the man himself.

Lost City Of Z: A Tale Of Deadly Obsession In The Amazon, By David Grann

British explorer Percy Fawcett believed an ancient lost city existed in the jungles of Brazil. He later conducted several expeditions himself to prove its existence. He codenamed this lost civilization “Z,” and he faced considerable challenges in each excursion.

Trekking through the Amazon is no easy task, and Fawcett faced dangers from wildlife, thick and even deadly vegetation, and tribesmen who had no interest in outsiders. Unlike most explorers, however, Fawcett preferred peaceful interaction with native peoples, using gifts and his calm demeanor to seek help in his quest.

Fawcett charted hundreds of miles of unexplored jungle, but never found Z. He also never returned from his final expedition in 1925 and was never to be seen again. Grann’s excellent book weaves a brilliant tale of adventure, and the author not only gives insight into Fawcett’s life, but he also actually retraces the adventurer’s steps through the jungle.

The Twenty-Ninth Day: Surviving A Grizzly Attack In The Canadian Tundra, By Alex Messenger

Getting attacked by a grizzly bear is a nightmare scenario for any outdoorsman. On a Canadian wilderness excursion with friends, Alex Messenger experienced this scenario firsthand and lived to tell about it. While out hiking alone, Messenger was mauled by a bear and his survival, at times, seemed unlikely. The title signifies the day of the attack, 29 days into the group’s canoe journey.

The author’s deep descriptions of what seemed like a once-in-a-lifetime trip contrasts with the brutal realities and dangers of nature. The attack leaves Messenger in a fight to survive as his friends race to get him to a remote village for medical treatment. This book will have readers making sure that bear spray is on their camping list.

The Infiltrator: My Secret Life Inside the Dirty Banks Behind Pablo Escobar’s Medellín Cartel, By Robert Mazur

Life as an undercover agent can be a 24-hour job. However, one wrong move and life undercover instead becomes six feet under. That’s what the author faced for five years as he associated with Colombian drug traffickers.

Mazur worked to infiltrate the dirty world of the underground bankers and financiers who helped to launder money for the Medellín Cartel. The work involved funneling billions of dollars between accounts as cocaine suppliers worked to make their outfits function as legitimate businesses. The book details numerous close calls, and readers will wonder what will happen next. This undercover job forces Mazur to think as if he is really his alias, and the double life begins to play tricks with his mind.

438 Days: An Extraordinary True Story Of Survival At Sea, By Jonathan Franklin

It stretches the imagination to believe that two men could survive at sea for almost a year and half. But that’s the fate two men from a small fishing village in western Mexico faced in 2012.

A massive storm pushed their tiny boat 80 miles out into the Pacific Ocean, and their fight for survival began. Staying alive meant catching fish and even birds, thousands of miles from home. Franklin excellently captures their dire situation and their industriousness in trying to stay alive, while avoiding going crazy.

Want even more tough-guy reads? Be sure to visit Skillsetmag.com to find all that and more!