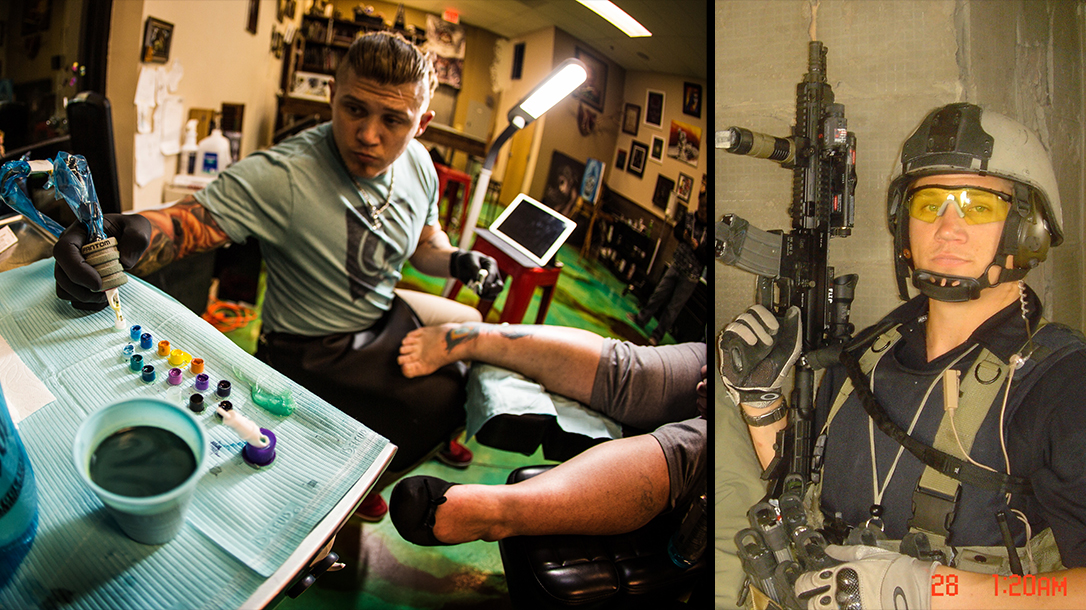 Q: Tell us about your job in the Marine Corps before you became a business owner with Trinity Art Collective.

A: I went in open contract to Parris Island and the MOS I got was Admin. Clerk. Not my cup of tea! It took some time, but I eventually made it over to the grunts as a 0331 Machine Gunner. I loved being a Machine Gunner but I knew I wanted more. I wanted to become a Force Reconnaissance Marine. During my eight years in the Marine Corps, that was by far the best job I ever had. After getting out, I did two semesters of college before thinking about going back in.

At the time, private security contracting overseas was getting popular. My best friend told me to try out for it, so I did. I contracted for DynCorp, Triple Canopy, MVM and Patriot Group. Contracting was the best of both worlds. I worked with guys from all special operations branches and didn’t have all the bullshit that inherently comes with being in the military. Working for certain government agencies was awesome, and I had plenty of job satisfaction. I remember first telling myself I would do two, maybe three years max. I ended up contracting for 13 years.

Q: Which people in your life have influenced you the most?

A: If I had to list the most influential people in my life, it would have to start with my dad and mom. The sacrifices they made for my sister and me growing up taught me you have to sacrifice for the things that you really want in life. Next would have to be all the men that shaped me while I was in the Marines (too many to list). There are many people that I admire that have influenced me as a tattoo artist, as well. Eventually, I will meet them and shake their hands. Shit, we might even have a drink and bullshit about life and tattooing.

A. My favorite would have to be something Asian inspired. I truly just love tattooing every style that I can do.

Q: Regarding cover-ups, which tattoos usually get the axe? Ex-girlfriend’s names? Tramp stamps?

A. Nothing is off the table. If you want it, I’ll do it. I educate all my clients on name tattoos. I don’t have a good track record of people staying together after I tattoo them, but if you want it, I’ll do it! (Laughs.) I don’t have a problem doing cover-ups, but the client usually has to be willing to compromise on things like design and the size of the tattoo. Nine times out of ten the cover-up needs to be done in color.

Q: How’d you get a cool Mafioso nickname like “Tony 4 Fingers”?

A: My nickname came from my time contracting in Iraq. Basically, I had a bad day. I was two days short of going home after contracting for six months. We had a meeting to take our client up to Baiji, Iraq. During 2004, that was a really shitty place to be. We stayed a little too long on site, and we received some incoming. I was lucky enough to have one land about two feet from me. Not a good day! I didn’t lose anything else but a finger. Lucky for me and everyone else in Iraq during that time, they had great surgeons at the CSH sites. My buddies called me “Tony 4 Fingers” afterwards, and it stuck.

Q: If you could go back in time to your 18th birthday and give yourself one piece of advice, what would it be?

A: That’s a hard one to answer, now having had two totally different careers. If it were advice on joining the Marines, it would be to not take any shit from anyone. I would tell myself to not fuck around — join Recon right away and do my 20 years and retire.

For more info about Trinity Art Collective and owners Tony Stannard, Jake Kloos and Kevin Patrick, please visit TucsonTrinityArt.com. If you’re a fan of tattoos, artists and all things cool, check out our podcast Skillset Live!