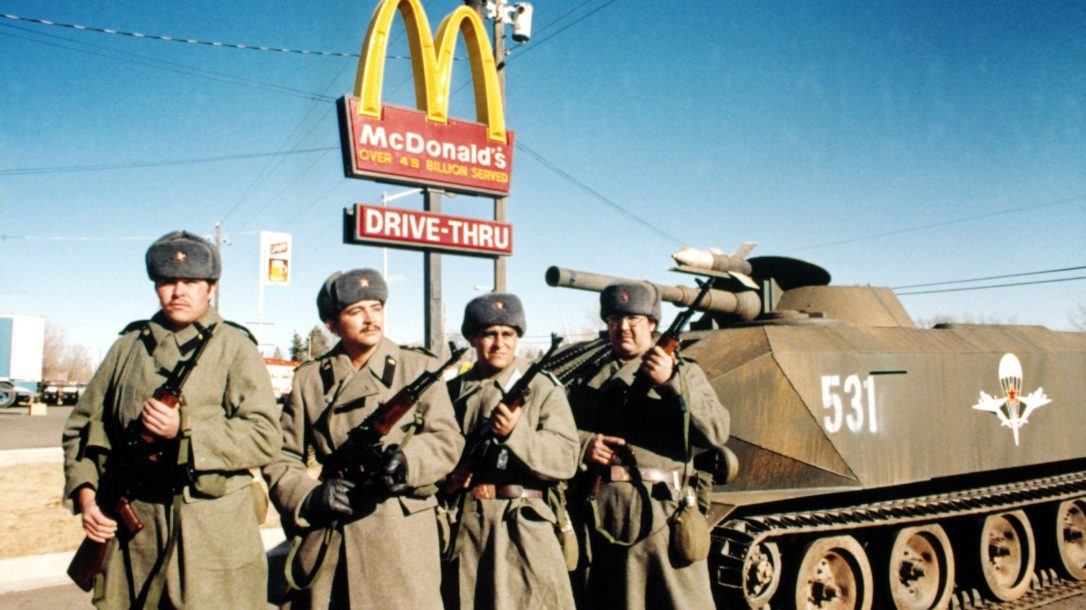 For most people, there is likely one film that in their minds defines a generation of hardcore, action moviegoers with its scenes and quotes. For the Generation X crowd (those born from 1965 through 1980), Red Dawn was that defining movie. It opened at the box office in August of 1984 during the height of the Cold War and midway through Ronald Reagan’s presidency, and the film certainly got a lot of media attention and was even anti-Russian enough to be denounced by then-Soviet deputy cultural minister Georgi Ivanov.

Red Dawn Was An Instant Classic

The rabid, anti-commie attitude in Washington and among producers in Hollywood at that time made it fairly easy to make the Russians the easy, go-to bad guys of that era, and other films, such as Clint Eastwood’s spy-plane-theft-from-the-Soviet-Union thriller Firefox, echoed this mindset. Made on a budget of $19 million, Red Dawn was a modest success with final receipts totaling $38 million.

Therefore, let’s put on some parachute camo pants and go down memory lane to learn some of the unique, lesser-known facts about this film. The movie opened to mixed reviews but eventually thundered to be the 20th-highest-grossing film of 1984.

The Motion Picture Association of America was in the midst of discussions with Steven Spielberg, who had received some heat from parents for a human sacrifice scene in his film Indiana Jones and the Temple of Doom, which had garnered a PG rating. The concern was that certain movies might be punished with less commercial success because they were either too harsh or too soft for their appropriately aged moviegoers. Concerned parents might not take them to go to see a particular film because of this. Jack Valenti, who was the president of the MPAA at the time, decided that a PG-13 rating could fill a necessary middle ground for this type of movie.

Although other films were selected for this new rating, Red Dawn was the first official release that had it. This may have helped Red Dawn’s box office success by allowing armies of 13-year-old boys to storm movie theaters across the country to see it.

The Director, John Milius, Was A Gifted Writer Who Was Upset About Not Being Drafted To Vietnam

Movie director John Milius, who directed the film and cowrote the screenplay, was not allowed into the U.S. Marine Corps in the 1960s due to his chronic asthma, and the rejection really bothered him. Instead, he focused his energies on writing since he was a voracious reader. After taking a crack at writing some screenplays, he was eventually paid by Francis Ford Coppola to write a little-known script called Apocalypse Now. Obviously, it became a huge success and was a high point for Milius professionally. It also garnered him an Oscar nomination. Milius is credited with some of the best lines in this film, including “I love the smell of napalm in the morning.”

Milius’ writing credits also included Dirty Harry, Magnum Force before cowriting and directing at the helm of Red Dawn. The film was originally entitled “Ten Soldiers” before it was redrafted with its now-famous title. Milius is also an avid gun fan, and he is widely recognized as the godfather of macho-man movies. He was known to leave a gun on his desk to make sure people had a memorable visit with him. A documentary on Milius that details his creativity and rise to stardom, was released in 2013.

Although Fictionally Set In Colorado, The Film Was Shot In Las Vegas, New Mexico

Las Vegas, New Mexico, was picked due to its small-town feel and access to the surrounding forests and canyons. Many of the townsfolk were asked to be extras in the film. New buildings in the downtown area were built by the movie’s set people to be blown up. Red Dawn was also noted as having one of the coldest shooting schedules on record. Temperatures dropped to 30 degrees below zero several times during movie filming. In fact, Patrick Swayze got bad frostbite during filming. There is also a documentary on the filming of the movie on titled WWIII Comes To Town.

Some of you might even remember watching a trailer before the film came out with Russian tanks rolling in front of a McDonald’s to get the audience’s attention. The rumor is that the updated trailers, posters and the scene with the fast-food restaurant in it were removed due to pressure on producers to pull that part of the film because of a real-life mass shooting that occurred at a San Ysidro Micky-D’s where 21 people were killed and 19 others were injured just a few weeks before the movie’s opening. It is said that the “McDonald’s trailer” is on the laser-disc version of this film released in the early ’90s. If you have this, you might own a rare slice of Red Dawn nostalgia.

The actor stated in an interview in 2012 that since the iconic scene of him standing on a mountain while shouting one of the most memorable lines in the film, fans still yell that line at him in person “about twice a week in real life and about 40 times a day on Twitter.”

The film made Guinness World Records for having the most acts of violence of any movie up to that time. According to their calculations, 134 acts of violence occurred per hour. That’s 2.23 per minute—a nice testament for a tough-guy film.

No True Fan Talks About The Reboot

The 2012 version was a box office failure that no fan ever wants to talk about, ’Nuff said. Wolverines!