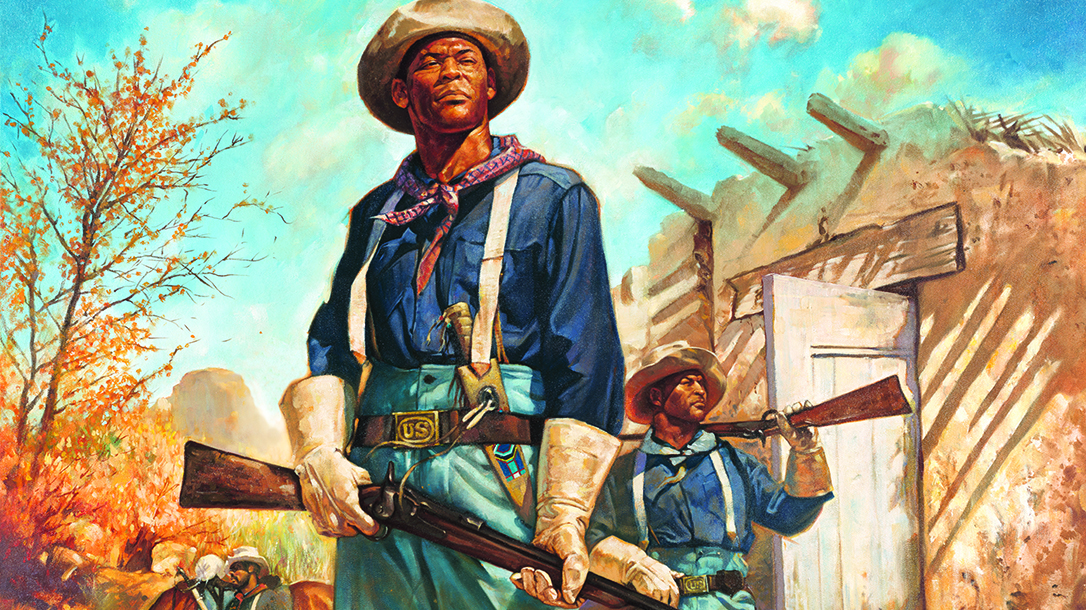 The formation of the 9th and 10th cavalries happened in August of 1866. Comprised mostly of African-American enlisted men, the commanders selected motivated, intelligent men capable of traversing the harshest terrains of the West while on horseback miles away from supplies, reinforcements and shelter. These chosen men would receive pay equal to other cavalry units and could expect the same amount of adventure. After months of recruiting and training, the cavalry was deployed to quell rising tides of violence among tribes, pioneers, cattle ranchers, Mexican bandits and Caucasian horse thieves. They became a motivated unit of hard chargers and, during their initial skirmishes with tribes, quickly earned the name Buffalo Soldiers for their fierce determination and resolve. In their first three decades, these two units would produce 15 Medal of Honor recipients.

The Formation of the Buffalo Soldiers

By 1868, the Buffalo Soldiers found themselves quickly in the middle of a Wild West mosh pit, with Kiowa and Comanche attacking Chickasaw and Choctaw tribes, renegade bootleggers expanding their networks and mail carriers being murdered. Once out on the Great Plains and away from strong supply lines and established forts. The 9th and 10th lived off the land, which included killing and eating buffalo and often using the hides as robes to stay warm in winter’s subzero temperatures. William H. Leckie and Shirley A. Leckie’s book “The Buffalo Soldiers: A Narrative of the Black Cavalry in the West,” extensively documents the units activities.

The 10th Cavalry became especially known for their discipline and tactics. In early June of 1871, the was an attack on a lone caravan of 10 wagons. The attack resulted in seven persons murdered, with four escaping to report the incident. Several angry Kiowa claimed involvement in the murders. The 10th Cavalry received orders to arrest them for trial. One Kiowa leader was confronted, and when he confessed to General Sherman, he drew a concealed revolver from under a blanket. The shutters opened instantly to reveal the well-aimed, steady barrels of the rifles of the Buffalo Soldiers.

The Kiowa relinquished the pistol and surrendered without a shot. Several others of the guilty party soon appeared with their weapons in hand. A bold leader cocked his Spencer rifle and pointed it at General Sherman’s head. Col. Grierson, the 10th Cavalry commander, grabbed it and told the armed men that violence would not save them. The several-man party surrendered, and peace prevailed due to the discipline, logic and tactics of these Buffalo Soldiers.

Grierson also shaped the 10th Cavalry’s fighting spirit and determination. His wife was the daughter of an abolitionist who allowed fugitive slaves to seek shelter in their home during the 1840s. He treated his men as soldiers, motivating them to be their best. Proud to serve, they had the lowest desertion rate and fewest court martials in the entire U.S. Army.

Comanche raids continued and grew increasingly effective, employing only small bands that would strike and move back into the landscape. These raiding parties attacked camps and ranches, stole horses, murdered enemies and generally terrorized other tribes. The 10th Cavalry, coupled with Seminole and Tonkawa scouts, began a large-scale mobilization. At times they covered 77 miles per day (and night) on horseback. They traveled 860 miles, so far forward of any Army outpost in Texas that they had to find their own water from springs, creeks, rivers and rainwater.

This long-distance movement sent the message that the 10th Cavalry was intent on victory and possessed the highest esprit de corps. At times, they were more than 200 miles from any U.S. posts, deep in hostile territory occupied by Mescalero, horse thieves and Comanche — an area now known as New Mexico. During these operations, one element of the 10th Cavalry suffered such dehydration they could not swallow food. With no water in sight, they had to drink the blood of a dead horse. After 86 hours and over 40 miles with no water, they discovered a lake. Four soldiers, 25 horses and four mules died from heat exhaustion and severe dehydration.

In the mid-months of 1877, a war was beginning in Lincoln County and New Mexico Territory. It involved two factions of civilians, with one group containing the infamous Billy the Kid. When these two groups began shooting and fighting in the street, a large contingent of women and children sought refuge with the 9th Cavalry. Special orders called for federal troops to avoid interference with local law enforcement, the 9th had to remain on post; however, it was the shots fired at a 9th Cavalry messenger that provided the catalyst for the Buffalo Soldiers to assist in quelling the vendetta. An officer of pressured the local law to obtain arrest warrants for Billy the Kid and others in his band.

With a Gatling gun and two companies of the 9th, the officer led an element into Lincoln County. They successfully tracked Billy the Kid and several of his cohorts to a fortified home. They then torched the home, and four of Billy’s crew died in a hail of bullets, but he escaped and evaded capture. Several months later, a lawyer was murdered in front of the Lincoln County courthouse. The Buffalo Soldiers once again assisted in the restoration of peace. Most citizens were too scared to join the posse to hunt and capture Billy the Kid, three companies of the 9th sent elements out to hunt him. Once again, Billy the Kid eluded capture, but the presence of the 9th brought peace to this frontier county.

The screams of citizens shattered the calm spring air of 1883. They were on the receiving end of rifle fire from an outlaw band of Apaches. They successfully killed 25 within a week across New Mexico and Arizona. The 10th and a large element of Apache scouts tracked them down into Mexico. Where they exchanged gunfire for almost a month before the group finally surrendered. Later, several of these Apaches would escape. One of the escapees was the well-known Geronimo. While the Buffalo Soldiers had no other encounters with him, he would participate in engagements involving other cavalry units on his way to becoming a notable figure in American history.

Also in 1883, large numbers of white settlers were illegally settling on and claiming a lawful right to land in the area now known as Oklahoma. These “Boomers” continued to grow in numbers, and the 9th Cavalry was called upon to stop them. That following summer, the Buffalo Soldiers gave the Boomers direct orders to vacate their newly seized lands. Over a thousand left without incident, but approximately 200 remained and challenged the soldiers. The cavalrymen responded by setting the illegally-built homes ablaze. Several months later, the Boomers established another settlement, and the 9th Cavalry ordered them to peacefully surrender and move off the land. They complied.

Cuba: From Hoof to Foot

In May of 1898, the Buffalo Soldiers found themselves giving up horses and sailing to Cuba to assist local efforts to oust Spanish forces from the island. During the initial stages, a small team of U.S. and Cuban fighters inserted across a Cuban beach and into a wooded grove to scout the area for the main effort’s landing. Quickly detected and met with a barrage of Spanish gunfire, causing chaos, casualties and catastrophic damage to their small, anchored boats. Now stranded and exposed, they sought refuge in an overgrown marsh and waited for the cavalry. Several rescue boats launched, but also fell victim to the Spanish firepower; however, a small contingent from the 10th were able to insert onto the beach and extract the men from the grove. For their actions, four of the Buffalo Soldiers received the Medal of Honor.

Soon after, the main force made landfall, and the now-dismounted Cavalry soldiers engaged in multiple firefights. They also traversed dense vegetation, crossed streams and dodged sniper fire from trees. The unit received praise for only firing when the enemy was within their sights. Without losing any officers during these charges, the 10th’s sergeants seamlessly led their units to victory.

These Cavalry units also charged San Juan Hill with Teddy Roosevelt’s Rough Riders and prevented the Spanish enemy from flanking. The unyielding 10th were the first to plant their colors into the crest of Kettle Hill during this battle. This final charge for victory helped to force the surrender of the Spanish Army. Ultimately, the 10th’s final battle in Cuba was surviving the plague of yellow fever that infected half their soldiers. Like to learn even more about this seminal time in U.S. military history? The Buffalo Soldiers’ actions in Cuba are well-documented in Captain T.G. Steward’s book, “Buffalo Soldiers: The Colored Regulars in the United States Army.”

Visit outdoorgroupstore.com to subscribe, or pick up a back issue of Skillset Magazine. You can also listen to our podcast, Skillset Live!