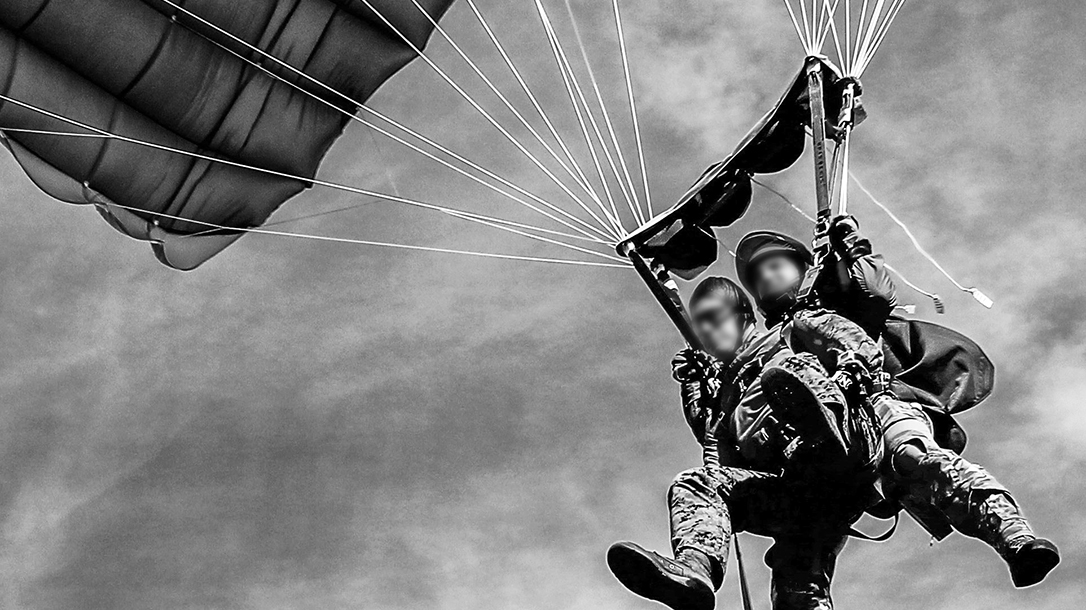 We all know that one of the sexiest ways of military infiltration is via parachute. From the low-level jumps perfected by the 82nd Airborne to the 25,000-foot HAHOs (High Altitude High Opening) performed by Tier 1 units, the title of Airborne has always been prestigious. Most soldiers think they have reached the top once they have completed the Military Free-Fall Parachutist course, but, honestly, that is just the beginning. A HAHO jump is one of the most dangerous means of insertion in the military.

Besides loss of oxygen, parachute malfunctions, entanglements, extreme cold temperatures and landing hazards, asking our brave men to do this in the dead of night is borderline suicidal. But when done correctly, a team of pipe-hitting SOBs can infiltrate enemy strongholds from standoff distances of dozens of miles. No one will ever see an aircraft, no one will ever hear them coming.

To perfect these skills of aerial navigation, special operations units rely mostly on local training. That means someone in the unit is designated as a SME and sets up what they think is proper instruction. Unfortunately, with the operations tempo these units have been experiencing since 2001, advanced MFF training has fallen to the wayside.

To combat this problem, civilian training companies have enlisted the help of former sky gods to teach these units in small, two-to-three-week increments. But like anything in this world, when the government is handing out money, you would be amazed to see how many so-called “experts” appear on the bidding list. This is where IDIS steps in and crushes the competition.

IDIS (an Old Saxon term for Valkyrie) is a military contracting company with the sole focus of training special operations units in advanced parachute infiltration. We aren’t talking jumping into a wide-open drop zone with lights and landing aids. We are talking about traveling up to 20 miles under the cover of darkness. All while wearing over 100 pounds of weapons, night vision and gear. Also jumping in (tandem) non-airborne passengers like K9s, interpreters and explosive ordnance technicians. Most of their drop zones are smaller than a football field and are usually located in the worst terrain possible. This is the shit they don’t teach you at basic airborne school. This is where boys become men.

Brian Parker, the co-owner of IDIS, has definitely earned his stripes in the airborne community. Not only was he a Military Free-Fall Instructor in Yuma, Arizona, he has also performed real-world combat jumps into Afghanistan. He spent his military career in the Army Rangers and was also member of the Regimental Reconnaissance Detachment. Seeing the need for more follow-on jump training, Brian founded the Advanced Tactical Infiltration Course at the Special Forces schoolhouse. For the first time in Army history, intensive, high-altitude jump training could be properly taught to deploying military members.

After 20 years, Brian decided to retire from the service. He teamed up with his co-owner Kathryn, a former three-letter agency intelligence officer, to form IDIS and take what he was teaching the Army to a whole new level. They opened up two private locations in Arizona and Texas equipped with their own airfields, hangers, classrooms and aircraft. They are definitely a one-stop shop for anything Military Free-Fall related.

We had the opportunity to attend a few days of their training this past winter in Hearne, Texas. Long gone are the days of “Just jump out and follow the leader.” They are training with some of the most-advanced navigational aids, communications, and night-vision and parachute systems in the world. Their briefings are extremely intense and much of their time is spent on rehearsals. Each member of a team must be completely capable of taking the helm and completing the mission. They start with daytime HAHO jumps and eventually work their way up to doing nighttime standoffs (up to 25,000 feet. Sometimes with tandem passengers and 400-pound tethered bundles while landing on unmarked drop zones in extremely rough terrain.

At the end of the course, there are no ceremonies and no badges to show what they have just been through. There is just a handshake and the overwhelming confidence that these men are ready to go into harm’s way for the good of America. Witnessing this, I felt proud as a former jumper to see the progress of the airborne community. There is no doubt in my mind that IDIS is the premier standard for Special Operations Military Free-Fall training.

Want to know more about living the alpha lifestyle? You can pick up a back issue of Skillset at OutdoorGroupStore.com and check out our weekly podcast, Skillset Live! You can also join in on the conversation on our social media pages!