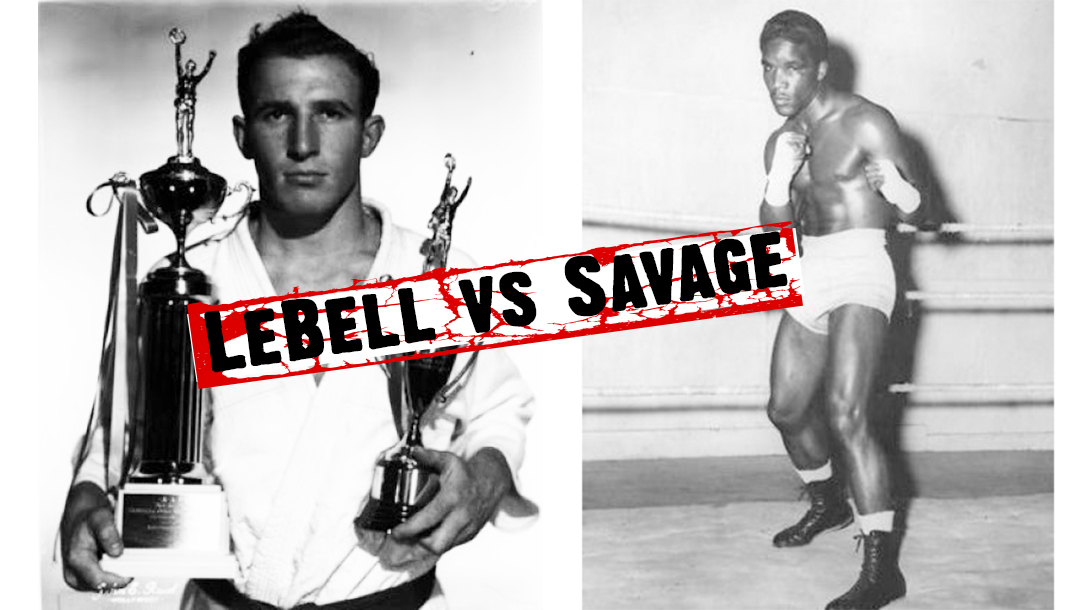 Conor McGregor didn’t stand a chance against Floyd Mayweather. His problem was that he agreed to a boxing match. This wasn’t the first time a martial artist fought a boxer as the world watched, but when boxer Milo Savage fought “Judo” Gene LeBell in 1963, the rules called for a “fight.”

The whole thing started with an interview in Rogue Magazine in which Australian boxer Jim Beck decried the popularity of martial arts, specifically judo (even though many believe he was actually talking about karate): “Judo … is a complete fraud … Every judo man I’ve ever met was a braggart and a showoff … Any boxer can beat a judo man. Judo bums hear me, one and all! It is one thing to fracture pine boards, bricks and assorted inanimate objects, but quite another to climb into a ring with a trained and less cooperative target. My money is ready. Where are the takers?”

The trash talk led to the very first time the world caught a glimpse of what we know today as mixed martial arts. Back then, it likely seemed an uneven matchup, only the boxers were supposed to be triumphant over the “judo bums.” But that’s not how it turned out.

Martial arts practitioners were furious at Beck’s challenge. Beck publicly and repeatedly claimed that any boxer could take down a martial artist in a fight and offered $1,000 (almost $8,500 in today’s dollars) any time a boxer lost to a martial artist. So, the judo bums who practiced karate and kenpō decided to ask “Judo” Gene LeBell to take Beck up on his offer.

For decades, boxing had dominated the minds of American sports viewers as boxers received more than their share of press coverage. It was relatively cheap to air boxing matches on television compared to other sports, and boxers had to be at the peak of fitness to be able to compete. Therefore, on the surface, Beck’s challenge was an impressive one.

But Beck was an amateur whose record of 4-2-2 didn’t exactly rock the world. However, when Lebell arrived in Salt Lake City, he learned that he wasn’t going to fight Beck. His opponent would be boxer Milo Savage, whose record was a much more respectable 49-46-10. Savage was also a former top-five light heavyweight. That didn’t bother LeBell at all.

“I’m no mental giant, so I viewed it as more of a challenge,” LeBell said. “The tougher your opponent is, the better you look if you beat him. The only thing that bothered me was what happened later—instead of boxing gloves, he wore what amounted to speed-bag gloves with metal inside.”

Savage was a formidable opponent on paper, but Gene LeBell was a formidable opponent on the mat. Now 87, he was a pioneer of martial arts in the United States. After earning his black belt in the U.S., he trained at the Kodokan in Japan, the worldwide headquarters of judo. He had been competing as a heavyweight in judo for more than a decade by the time of his fight with Savage.

The rules were simple. The fight would last for five three-minute rounds. Savage could use any punch, but LeBell could not kick. LeBell was also prohibited from attempting any kind of takedown below the waist, which included tackling. In return, the boxer agreed to wear a judogi, a gi designed for wear in judo.

When it was time to get into the ring, LeBell’s experience showed. He realized that the boxer had been trained in some remedial judo to be able to defend against LeBell’s throw attempts. Savage also wore a gi for karate, not judo, which was much smaller and harder to grip. LeBell also contends Savage used Vaseline to make it difficult for the martial artist to grab him.

None of that mattered. The fight lasted four rounds, which were mostly defensive for the boxer. In the fourth round, LeBell managed to throw Savage and get a mount on him before executing a rear naked choke that took the boxer out. Judo won the day. As a show of sportsmanship, LeBell’s training team graciously revived Savage when the ring doctor could not. “The next morning the newspaper headlines said, ‘The Savage Was Tamed,’” LeBell recalled.

After the fight, LeBell went on to work as a Hollywood stuntman and actor, appearing in more than a thousand films and television shows. The stories about Gene LeBell in Hollywood are legendary. They include an incident in which he choked out Steven Seagal to the point that the aikido master pooped his pants. Another involved a fight against Bruce Lee that may have inspired Brad Pitt’s character in Once Upon a Time in … Hollywood.

Boxing would reign supreme for another 50 years. As LeBell and Savage fought in Salt Lake City, a young boxer named Cassius Clay was preparing to fight heavyweight champion Sonny Liston in February of the following year. The Salt Lake City street fight was soon forgotten, and it was only at the turn of the 21st century that mixed martial arts achieved the widespread acceptance and popularity that boxing once enjoyed.

If you like MMA, warfighters and all things “alpha”, check out our podcast Skillset Live. Get in on the conversation on our social media pages or pick up a back issue at OutdoorGroupStore.com!