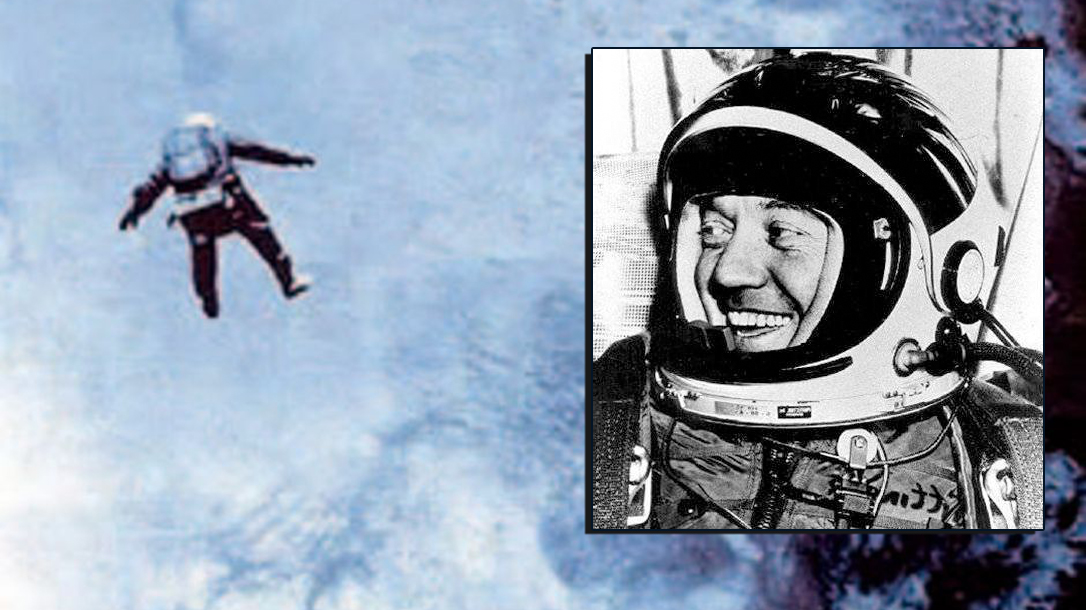 The First-Ever Skydive From The Stratosphere Happened In 1960

In 2012, Austrian skydiver Felix Baumgartner floated to 24 miles above the earth aboard a helium balloon. He then jumped from the platform while wearing a pressure suit, reaching speeds of Mach 1.25, breaking the sound barrier as he fell. He had a team of scientists and researchers to help him prepare with the latest technology.

Baumgartner also had 84-year-old Joseph Kittinger as his capsule communicator. Kittinger is a former Air Force officer and test pilot who knew exactly what Baumgartner could expect from jumping at such a high altitude – because he’d done the same thing more than 50 years before.

It was by no means easy to do what Baumgartner was attempting. But in the 50-plus years since Kittinger first took to the stratosphere, humans have not only gone to space, they have explored the Earth’s orbit, launched satellites and space stations, gone to the moon, and were even talking about missions to Mars.

One of the pioneers of the age of test pilots and space flight was (and still is) Colonel Joseph William Kittinger. Kittinger was a fighter pilot in the Vietnam War, who flew more than 480 combat missions, and shot down at least one enemy MiG-21 before being shot down himself. He spent 11 months being tortured as a prisoner of war before being repatriated.

But before going into combat in Vietnam, he was a record-setting and fearless Space Age daredevil. He was going to set world records for the longest parachute drogue fall, the highest parachute jump, and the fastest speed by a human through the atmosphere.

When Kittinger first floated to the stratosphere in 1959 as part of Project Excelsior, he was the first person to ever see the curvature of the Earth. It would be another five years before the Soviet Union would launch Yuri Gagarin into space and another ten before the United States would land on the moon. There was still a lot to learn.

Kittinger made a series of three jumps from the stratosphere as part of Project Excelsior. His first skydive came 14 miles above the Earth’s surface. He floated above the ground aboard a helium gondola in order to test the Beaupre multi-stage parachute system for pilots who eject at high altitudes.

To protect his body from the altitude, he wore a complex pressure suit , which forced him into a sitting position while falling to simulate a pilot in an airplane cockpit. On Nov. 16, 1959, he made his first jump, which was almost his last. His equipment malfunctioned and Kittinger passed out during freefall. The only reason his chute opened was because it had an automatic opener rigged to it.

During this jump he actually set another skydive record: after going into a flat spin of 120 rpm, his limbs felt the pressure of 22 times the force of gravity.

During his second jump, he broke his own altitude record, earning him the last-ever awarded A. Leo Stevens Parachute Medal. His third jump set the record that would be held for 53 years until Baumgartner’s 2012 jump. At nearly 20 miles above the Earth, he jumped with a drogue parachute to stabilize his fall, reaching speeds of 614 miles per hour.

“There’s no way you can visualize the speed,” Kittinger would later say in an interview. “There’s nothing you can see to see how fast you’re going. You have no depth perception. If you’re in a car driving down the road and you close your eyes, you have no idea what your speed is.”

“It’s the same thing if you’re free falling from space. There are no signposts. You know you are going very fast, but you don’t feel it. You don’t have a 614-mph wind blowing on you. I could only hear myself breathing in the helmet.”

With that visual in mind, it’s no wonder Felix Baumgartner would want a real-life mentor like Joseph Kittinger to help him break that kind of skydive record.