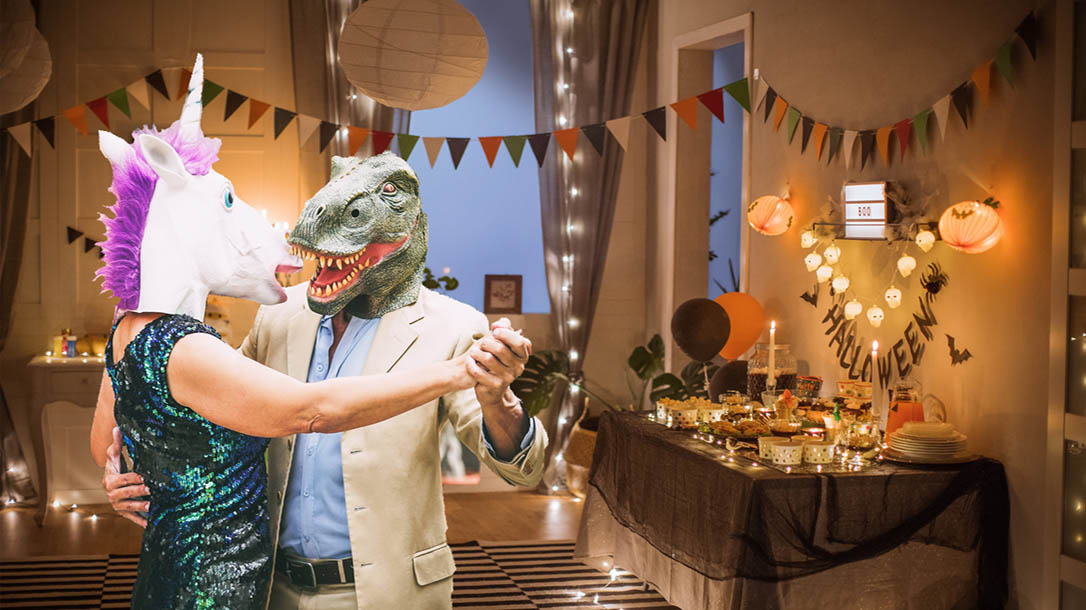 Ten Clever Adult Halloween Costumes: No One Should Dress Up As A Crayon

“In the real world, Halloween is when kids dress up in costumes and beg for candy. In Girl World, Halloween is the one day a year when a girl can dress up like a total slut, and no other girls can say anything else about it.” Cady; Mean Girls.

Seriously, she isn’t wrong! This is the Holiday where we can dress up and be anything we want. An astronaut. A superhero. A police officer, and yes, even a damn crayon if you must. Nowadays, in the age of Comicons and super nerds vs. superheroes, dressing up can be more cosplay than eight-year-olds fooling the spirits and going house to house asking for candy. Here are 10 of the most clever adult Halloween costumes, and no, a “slut” isn’t one of them.

MIB, If you are a couple or an individual that is a pug owner, consider dressing up as the Men In Black, and your little puggle friend can be Frank the pug.

Tyron Biggums is a hilariously loveable crackhead. The creation of Dave Chappelle and his band of writers on the Dave Chappelle Show. All you need is a brown blazer; the dirtier, the better. A red beanie and a blue hoodie, oh yeah, don’t forget the crack.

The Nun, in a sea of Jason Voorhees, Freddy Kruegers, and scary clowns, I think this costume is one of the easiest to execute and scariest no matter how good you can do the makeup. Also, the only times it is entirely acceptable for a grown-ass man to dress up as a woman around children, you’re at least this way you’re being honest and letting the children know your intention is supposed to scare them.

Bonnie and Clyde, if you have a friend or significant other you’d like to pair with for your creative Halloween, why not go with some of the most famous gangsters known? Get yourselves some of the best 1930s-like clothes and hats and cover yourselves in fake bullet holes with some blood and Botta-bing Botta-boom. Everyone is going to know who you two are.

I love this one every time I see it. Again, this one can be done by guys and gals. Get yourself a pink robe, hot glue a bunch of stuffed animal cats to it, and grab some rollers for your hair and crazy cat lady lives.

Once again, I have not seen this enough and would like to see a wave of Chazz and Jimmy’s out there. The leotards may be a little harder to come by, but come on, is there anything China doesn’t have their kids making for us to buy and enjoy? I’m sure one quick trip to Amazon and this costume is as good as done.

This costume has been executed quite well in the past. With a nude swimsuit (careful googling that) and some strategically smudged dirt, oh, a warmer client during the Fall season, this is fun for people to guess.

8. Action Movies for the ladies

Calling all ladies that can pull it off, Tomb Raider is still one of the hottest costumes a gal can squeeze herself into. PS, please stop the Harley Quin madness. It doesn’t look good, and there are far too many of you.

9. Action Movies for the guys

A super easy category is action movies. Blue short sleeve shirt, striped tie, and a name badge. Don’t stop smiling and saying, “It’s as if Jesus washed my tongue, and right before, he told my dad he’s good enough.

Gunnery Sergeant Hartman from the 1987 film Full Metal Jacket is a no-brainer. We don’t see enough of this character walking around Halloween screaming quotes such as “Were you born a fat, slimy, scumbag puke piece o’ sh-t, Pvt. Pyle, or did you have to work on it?”

Costumes Should Be Creative

Well, that’s it for some funny, creative, and hilarious adult Halloween costumes. It’s more fun when you’re creative. Some of the best costumes are the ones where you get to say, “Ohhh, I get it!” when you figure out the ingeniousness that went into the costume you’re looking at. Have fun with it since that is what Halloween has become to our culture, and don’t be “scared” to be bold. Oh, and ladies, please feel free to slut it up as much as you want. No one will complain unless you have your kids with you!