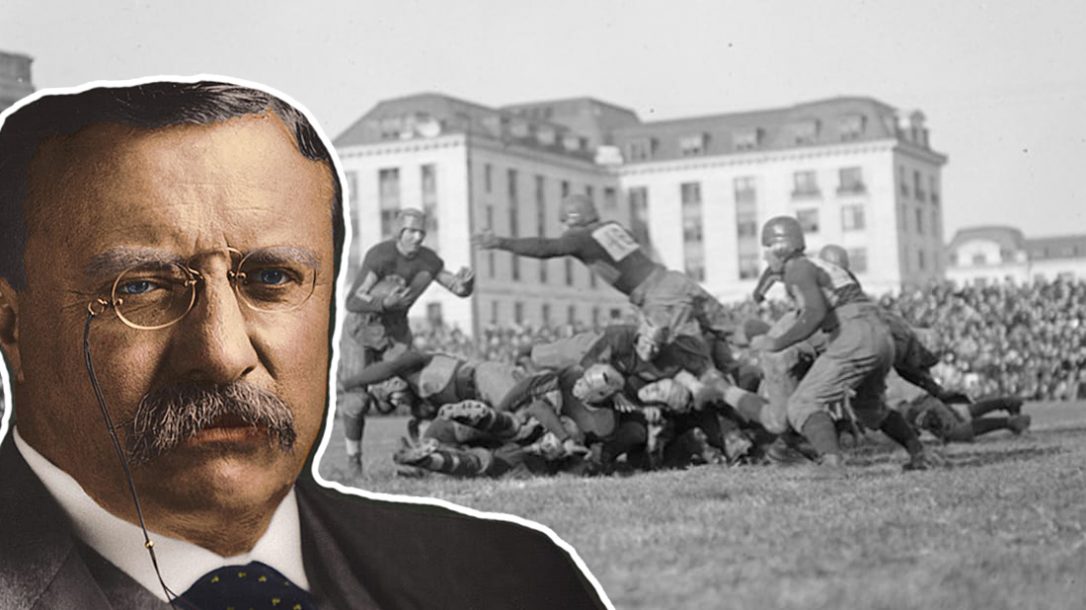 (Photo by Library Of Congress)

Few historical figures have been lionized like Teddy Roosevelt. The 26th President of the United States lived in the new era of industrialization and with emphasis on refined civilization. In that time, despite his formal education, Roosevelt became known for his love of masculine, dangerous and unrefined pursuits. The Harvard grad was a soldier, boxer, wrestler and hunter. He saw the trend toward ease, leisure and comfort that industrial civilization was heading toward. Roosevelt promulgated this ethic by defending the (then) new sport of football, by competing and practicing numerous combat sports himself. He still managed to deliver the most eloquent 1899 speech on the subject entitled “The Strenuous Life.”

Roosevelt said, “I believe in rough games and in rough, manly sports. I do not feel any particular sympathy for the person battered so long as it is not fatal.”

Roosevelt was an avid supporter of football, seeing his first game as an undergraduate student at Harvard. Roosevelt developed a love for the sport and its ability to develop character in young men. In the late 19th century, football was a new sport going through growing pains. It was popular, but far too often, it actually was fatal. One season had an unbelievable 18 deaths. The sport had grown in an atmosphere of dirty play and corrupt officiating, which led to multiple on-field deaths.

The sport began to take on a reputation for barbarism, and many universities were on the brink of outlawing football. Holding meetings with coaches and high-ranking college and government officials at the White House. Roosevelt himself then pushed for cooperation and a safer, unified ruleset. He was able to keep most school programs open and paved the way for modern NCAA football.

Not just a talker of the talk, Roosevelt was known for practicing and competing in multiple combat sports, including boxing, wrestling and Jiu-Jitsu. He was also known as an avid outdoorsman and was perhaps most famous for resigning from his position as Assistant Secretary of the Navy to lead the first U.S. Cavalry, known as the Rough Riders, into battle in Cuba during the Spanish-American War.

Roosevelt spoke often of the glory of military service, and although never a champion in any of the sports he played, Roosevelt consistently extolled the virtuous aspects of “hard manly sports.” TR credited sports and the outdoors for diminishing his serious asthma and fortifying him as a young man. He carried his love of wrestling, boxing, hunting and exploring with him all the way to the highest political office. He became known for arduous hiking and hunting trips during his time as governor. As president he even brought elite wrestlers in for private practices while in office.

Roosevelt continued, “We do not admire the man of timid peace. We admire the man who embodies victorious effort; the man who never wrongs his neighbor, who is prompt to help a friend, but who has those virile qualities necessary to win in the stern strife of actual life.” In his speech, TR argued that for individuals and countries alike, meaning comes from struggle.

In a rebuttal of the competing view on foreign policy of the day, isolationism, Roosevelt argued that America must fortify its army and navy and become active in global politics to protect democracy’s interests. He stated, “While a nation’s first duty is within its own borders, it is not thereby absolved from facing its duties in the world as a whole; and if it refuses to do so, it merely forfeits its right to struggle for a place among the peoples that shape the destiny of mankind.”

Roosevelt, often criticized for glorifying war, but had America not developed its military power and begun protecting Her interests globally at the beginning of the 20th century, both world wars may have gone differently, and it is very likely democracy would be far less common today. Roosevelt believed men should be moral and neighborly yet tough, brave and act with conviction. He also envisioned the United States as a country kind and fair to its neighbors yet capable of tenacious defense of her principles. That great American mindset saved the world from fascist domination and communist rule and made our country the world’s only superpower upon entering the 21st century.

Given that our civilization has only become more comfortable, Teddy Roosevelt’s ideas are perhaps more important than ever. Most Americans will never have to till a field or hunt to survive, so it is important that we maintain an emphasis on hard work and bravery as virtues. It is important that young men participate in “rough and manly games,” to build their toughness. It’s important that the U.S. remain the protector of democracy and a beacon of freedom and light around the world.

Like what you read above on Teddy Roosevelt? For another cool history lesson, check out our article on legendary lawman Bass Reeves! Pick up a copy of our magazine at OutdoorGroupStore.com and keep up with us on Facebook!