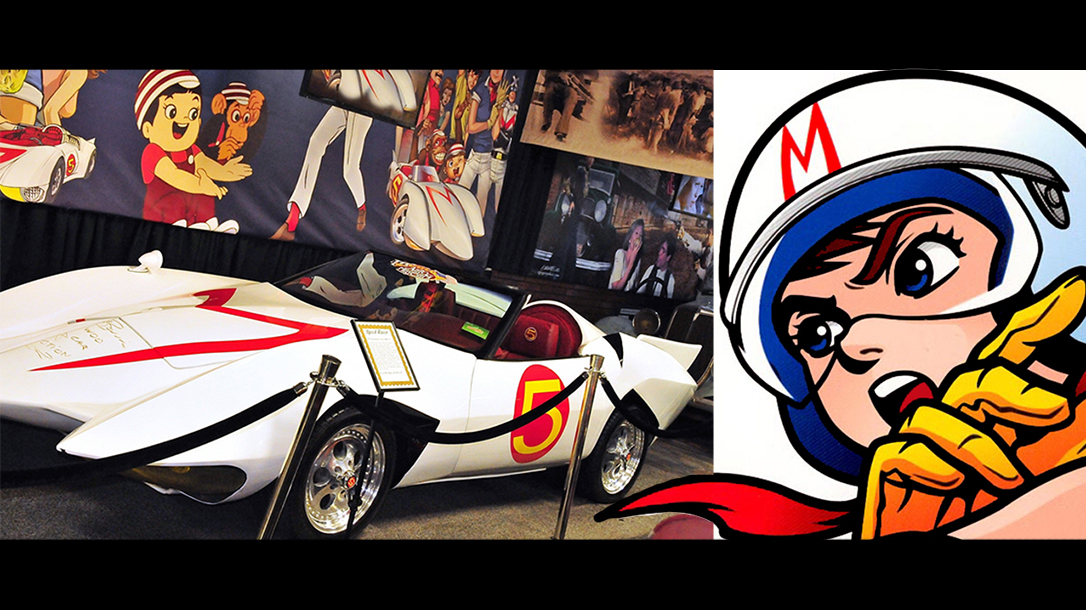 Okay, if you are going to make up a magnificently fictional hero car, you might was well go over the top in pretty much every respect.   It was the brainchild of a cartoonist in Japan:  it started as a comic book.  Then, circa 1967, they decided to do a cartoon series, first in Japan, and then later brought stateside courtesy of an outfit called Trans-Lux.  The over-the-topness carried very well from comic to cartoon.  And as is so often the case in pop culture, the car not only became a character, it overshadowed the eponymous protagonist.

They called it the Mach 5.  No, that doesn’t refer to top end:  a mach, or the speed of sound, is about 768 miles per hour.  So, if you wanted five of them, it’d be in excess of 3,800 mph.  For reference, the unclassified numbers for the blistering-maybe-fastest-ever-atmospheric ride was the SR-71 aircraft, and it came in someplace around 2,500 mph.   Rumors suggest that 3,200 mph was the real number.  Either way, the 5 part of the Mach 5 is that it was the fifth racecar built by Mifune Motors (in the Japan series), Pop’s Motors stateside.  And further related to the Japanese heritage, the giant “M” on the hood does not stand for “mach” – it stands for Mifune.  That, in turn is a tribute to a Japanese film actor Tashiro Mifune, who was, as it turns out, more or less, the Japanese equivalent of Clint Eastwood.

So what did they invent?   It was a wasp-waisted, two-seat, convertible, front-engine, all-wheel-drive racecar, with five-hole mag wheels and badass vertical tailfins, running a stated 5,000 horsepower.   We are still trying to find out who his tire supplier was.  Anyway, as with any good hero car, it’s loaded to the gunwales with cool gadgets.  Most of them are controlled from the center of the steering wheel, where buttons marked “A” through “G” tell the story.  They are:

Button A:  This activates jacks o the Mach 5, one in each corner of the car, originally designed to permit maintenance work, but ultimately involving into a system for jumping things at high velocity and serving as an alternate braking system.  If this actually worked, we would all have them.

Button B:  Belt tires.  If Bridgestone ever gets ahold of these, Blizzaks are gone.  With the press of a button, a heavy layer of outrageous rubber expands over all the tires, conferring tractive forces that would make Spiderman take notes.  We have had quite the opposite happen, where the entire tread carcass departs the tire, but have not figured out how to make that work in reverse.

Button D:  Then there’s the shield.  It encloses the open top of the car with a bullet-resistant, airtight, waterproof bubble that allows getting shot at and going full submarine.

Button E:  Special Illumination or Night Vision.  The earliest real night vision started coming on line toward the end of WWII, and by the time you get to Vietnam, Starlight scopes were in use, so this is one of the least crazy mods to the car.   Well, those two big lights under the front of the car are capable of projection that beats all of that.

Button F:  Underwater mode.  Used in conjunction with sealing the cockpit, there is a supply of oxygen (you’d actually want plain air or mixed gas, to avoid oxygen toxicity) and a periscope that feeds images to a tv screen.

Button G:   In an era before anybody had ever heard the term “drone,” Speed had himself a remote-control homing pigeon that sprang out of the hood.  It could be manually controlled, or, by hitting another button the central console, simply told to go home.  It was capable of packing a small payload and could even be used as a kinetic weapon against the various evildoers Speed was always dealing with.  Sorry, no Hellfire missiles.

So, how do we get from 1960’s cartoon drawings to the actual car you see here?  Enter an outfit that owns the intellectual property rights to the series.  They partnered with a children’s non-profit, with the idea that they would fund the non-profit by selling each car for about the Treasure of The Sierra Madre.  Rumor has it that they were stickered as high as $175k.  While there may still be a bunch of rabid Speed Racer fans, it turns out that asking them to pay well into the six figures for a 1984 Corvette (which is the underlying architecture) with a body kit was just a little more than the market would bear.  Very few were produced.

Brian Grams, of the Volo Auto Museum (www.volocars.com), owns this one.  It’s the prototype.  He reports that its sole virtue is that it looks cool.  When GM brought out the ’84 Vette, they put in the now much-maligned Crossfire 350 engine.  Now, in fairness to GM, that was just at the time that technology and emissions/mileage were pushing the envelope and they had just made a jump to electronic throttle-body fuel injection.  They opted to go with two throttle bodies, for two reasons:  1) their supplier, Rochester, didn’t have a single one large enough, and 2) the designers had gone with a very low, sporty hood line:  twin throttle bodies could be positioned to the sides, keeping height low and evoking  a sixties performance elan.

Problem was, the super-flat intake manifold pretty much sucked at fuel distribution, so the engineers had to compensate by injecting more, which defeated the mileage goals.  Plus, the intake slowed down the air-gas charge such that driving to the 7-11 would have been miserable.  In an ongoing comedy of patchwork fixes, they responded by making the manifold and ports much smaller, which pretty much choked out whatever real power potential the motor had ever had.  That was coupled with a new four-speed automatic that wasn’t strong enough to stand up to the motor in overdrive, so it had to be programmed to shift down.  And GM wasn’t the only ones making it up as they went in this car:  Brian reports that the underhood packaging, in order to fit the custom body, had plenty moved around.  The battery is nearly inaccessible, behind one of the front wheels.

Oh, and none of the buttons work.

All of which is, of course perfectly okay, because it’s a cartoon car from the sixties.  Its best use is for you to come take a look at the marvelous Mach 5.