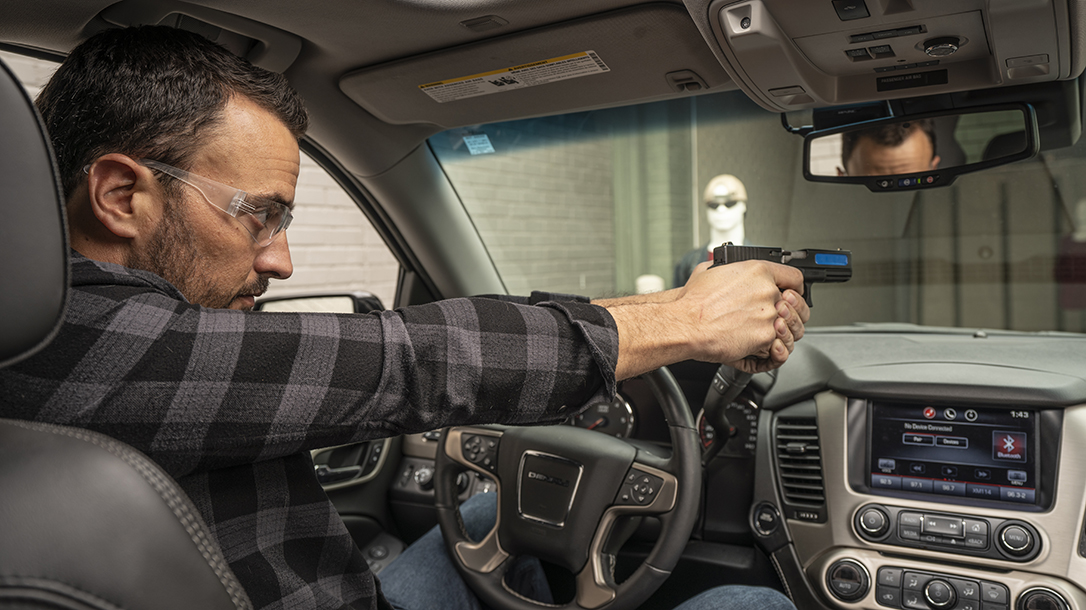 To say Jeff Houston is a busy man is an understatement. His skillset behind a firearm has led this Denver, Colorado, native to the Green Berets and later to become the Director of Operations and Lead Instructor for the NRA Carry Guard. Jeff also owns Tac7, a boutique security firm based in Dallas, Texas, specializing in the security needs of private clients and families and corporate training for potential workplace violence.

SS: What made you decide to join the military?

JH: I was attending Arizona State when 9/11 happened. That prompted me to start taking a look at what I really wanted to do in this world. I started to look into different ways of serving, including law enforcement and military options. Our country was at war, and I came to the decision that I wanted to serve at one of the highest levels of the military and do good things.

SS: What made you decide on the Green Berets?

JH: I do a lot of research when making big decisions, and my decision as to what I wanted to do in the military was perhaps one of the biggest decisions I would make in my life. I read several books and countless other articles on various special operations units and concluded that Army Special Forces was what I wanted to be a part of. I considered other special operations units as well. All have their differences, but the diverse training of Army Special Forces edged out the others for me. The training pipeline to become a Green Beret takes over a year and most people that try don’t make it. Being part of an ODA (Special Forces team) was an honor and set the foundation for what I’m doing now.

SS: How has it been being part of the NRA and constantly having a front-row seat to the fight for our Second-Amendment rights?

JH: When I was asked to come on board to help create a new program for NRA, I was excited for the opportunity and honored to be part of that team. By that point, I had been doing firearms training and security consulting for the last seven years and had worked with some incredible people and organizations that I gained a lot of experience from. To be part of an effort to better equip and train the responsibly armed citizen is a privilege that I don’t take lightly. It’s important to us and our Second-Amendment rights to continue to properly educate and train those who exercise their right to bear arms.

SS: You’re the NRA Carry Guard Director of Operations and Lead Instructor. What does that entail?

JH: I’ve been able to work alongside some of the greatest guys—Jack Carr, Eric Frohardt, Mike Pannone and several others as a result of the Carry Guard training program. There are a lot of people doing good for the program. My focus is helping with curriculum development, training instructors and ensuring that classes are executed to our high standards. Carry Guard training is a fresh and new approach to training compared to the NRA training most people are familiar with.

SS: You also own Tac7 based in Dallas, Texas. What’s the mission behind it?

JH: Tac7 helps people to live safer lives. We consult for individuals, families and companies in a variety of ways. Our team gives people the resources and training to better protect themselves as they go about their daily lives—at home, in the workplace and in between. Our team is comprised of veterans, law enforcement and medical professionals who have a combined set of experiences, ensuring our clients get the best education and training possible. We train people at our office and range or inside their homes using training tools like UTM (non-lethal marking rounds). Our Dallas headquarters has a dedicated scenario training space and movable walls. It also has a bay to drive vehicles into for training. For live-fire and maneuver training, we use a combination of indoor ranges and also our own outdoor 635-acre range facility, just 45 minutes from Dallas.

SS: Running your own business while being involved with the NRA means a hectic schedule. What’s a work habit you feel can help other entrepreneurs?

SS: Concealed carry continues to grow in popularity. What’s some advice for people who decide to carry every day?

JH: Carrying a gun is a right, but with that right comes a responsibility to train. Take carrying seriously and commit to it; don’t approach it half-heartedly. Get the right gun, holster, equipment and training. Then spend time dry-firing and practicing until you are comfortable and confident. I hope that more people responsibly exercise their right to carry and continue to fight for our Second Amendment.

For more on the military and the veteran community, check out our podcast Skillset Live!  Get in on the conversation on our social media pages or pick up a back issue at OutdoorGroupStore.com!