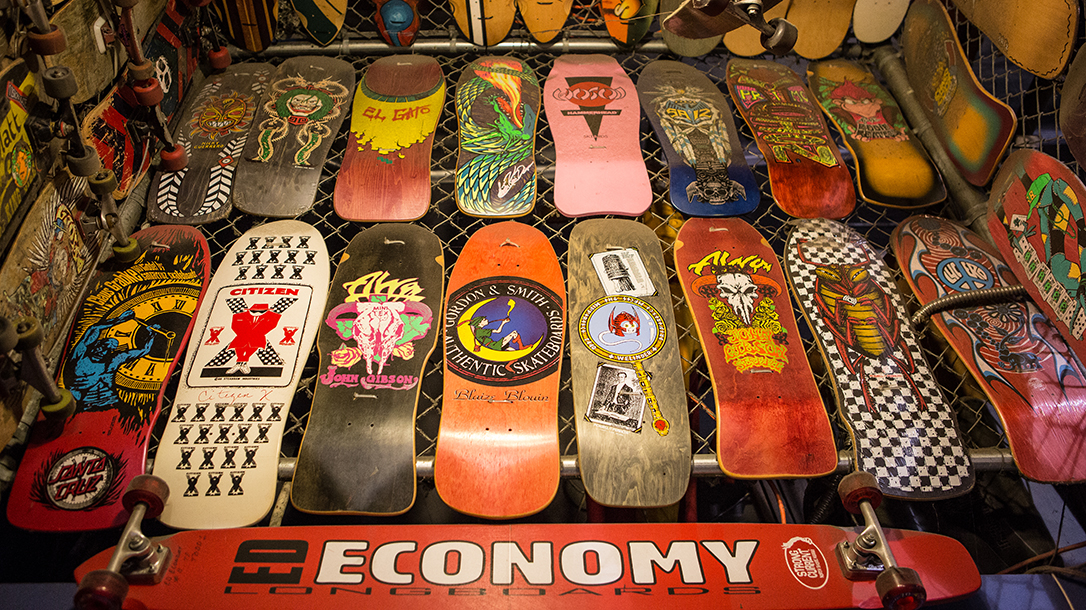 Skatelab: A Look Inside the World’s Largest Skateboard Collection

Continuing our collector series, we head west to the sleepy town of Simi Valley. This small suburb of Los Angeles is the home of Skatelab, a 30,000-square-foot facility that houses a massive skatepark and the world’s largest skateboard museum.

We’ve heard a lot of success stories about quitting cigarettes, but this one tops the list. Skatelab owner and museum curator Todd Huber was a hardcore smoker and tried to quit several times. He eventually saw a hypnotist to help kick the habit. As they started discussing how much he spends on smoking a year, a light bulb went off in his head. What if he could quit the cancer sticks and use that $1,200 a year on something he really loved? At that moment, the world’s largest skateboard collection was born.

Todd has spent decades assembling his stockpile of vintage and modern-day boards. He would dig deep at all the southern California swap meets and even was one of the very first skateboard traders on eBay. “When I did my very first eBay search for skateboards, I got a total of 17 results,” he laughs. “Now, you get over 100,000 on a slow day.” But finding the rare, vintage boards from the 60s, 70s and 80s has become quite the skillset, itself. The value of these boards has skyrocketed. An original-issue Tony Hawk Iron Skull deck is easily $3,000, a far cry from the $50 skaters paid back in 1985.

A Look at the Skatelab

Todd has over 5,000 skateboards displayed at Skatelab, but he’s still not showing all his cards. “I probably have another two or three thousand in storage, just in case someone wants to claim they have a bigger collection than me,” he says with a smirk.  But his hoarding doesn’t stop with decks; he also has a massive assortment of hard-to-find skate magazines. Every Thrasher, Transworld and even the extremely rare Big Brother rags are piled up deep in his office.

Skatelab is also the home to the Skateboard Hall of Fame. This side of the museum really brings back memories of some of the great pioneers of the sport. Tony Alva, Stacy Peralta, Bruce Logan, Lance Mountain, Jay Adams and even Devo are listed as HOF alumni. Inductees get stunning, hand-painted portraits created as well as permanent spots for their signature boards on the museum’s walls. This part of the facility was by far our favorite and is a must-see for anyone who grew up pushing wood as a teen.

All told, Todd’s collection is worth over half a million dollars, and we’re sure that number is climbing every year. We appreciate that Todd has taken it upon himself to keep this history alive for younger generations. Something that was once laughed at as a child’s hobby has grown into a billion-dollar industry and will even make its debut in the 2020 Olympics — not bad for a bunch of asphalt-surfing kids from California.

Make sure to listen to our podcast Skillset Live!  Get in on the conversation on our social media pages or pick up a back issue at OutdoorGroupStore.com!