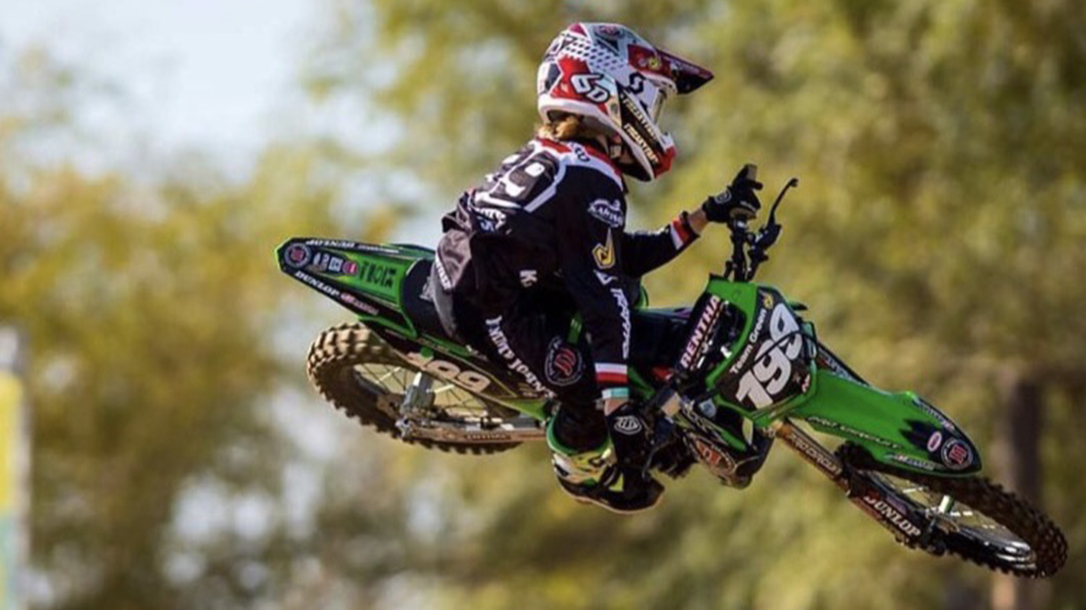 The Moto Minion: Why Ryder DiFrancesco Is the Future of Motocross

Editor’s Note: This article first ran in Skillset back in 2018. To quote the eloquent Ferris Bueller, “Life moves pretty fast. If you don’t stop and look around once in a while you could miss it.” Well, we missed it because Ryder DiFrancesco is already 15 years old and now part of Monster Energy Team Green, Pro Circuit Kawasaki. You can follow him on Instagram @ryderdifrancesco199 and read more about bad ass athletes like him in past issues of our magazine!

Ryder DiFrancesco has won back-to-back AMA 51cc Stock (4-6) titles at Loretta Lynn’s AMA Amateur National Motocross Championships. For those who aren’t aware, that’s no easy feat, considering it requires riding faster and harder than those a full year older, and then coming back and doing it again to defend that title. Even more impressive, he did it at five and six years old.

That’s right, Ryder DiFrancesco is a 12-year-old kid who is confidently working toward becoming a future professional star in the world of motocross. In 2011 and 2012, DiFrancesco placed 2-1-1-1-1-1 across six motos. His talent is obvious, and there’s no slowing this guy down.

DiFrancesco hails from Bakersfield, Calif., where he is hooked up with a Kawasaki Team Green team. Since he first rode at the age of two, DiFrancesco has progressed through the ranks without even a hiccup. He now rides on 85s, and he took the 85cc (9-11) Limited title at the 2017 Rocky Mountain AMA Amateur National Motocross Championship.

We spent some quality time with Ryder DiFrancesco, getting to know his quirks, the story behind that hair and even what his favorite sandwich from his number-one sponsor (Jimmy John’s) is.

Q: You’re 12 years old and already what some are calling a racing prodigy. When and how did you get started racing?

RD: I got into racing partly because racing runs in my dad’s side of the family. I was raised around dirt bikes, and I remember being a toddler in the shop with my dad, helping him fix his dirt bikes. He told me that once I could ride a bicycle, I could have my own dirt bike. I learned how to ride a bicycle at 2-and-a-half years old, so my dad bought me a P-dub dirt bike and put training wheels on it. By the time I was three, I was riding it with no training wheels. The day I turned four I started racing.

RD: My dad was pretty much the person who taught me to ride. When I turned nine, I started training with a trainer named Buddy Antunez. When I go back East to race, I usually stop and train at Millsaps Training Facility.

Q: How do you train for your races?

RD: I train five days a week and go to the gym and do CrossFit three days a week. When a big race is coming up, I usually do twenty minute motos or two-lap sprints. It’s usually something with a lot of intensity.

Q: Do you have a pre-race ritual, superstition or lucky rabbit’s foot?

RD: I don’t have a pre-race ritual, but I used to have lucky gloves.

Q: I read that one of your closest competitors is also one of your best friends.  How do you two separate the track from the day-to-day?

RD: One of my best friends is Jett Reynolds; he is also a Team Green Kawasaki rider. He lives in the same town as me. We grew up riding and racing together. We are very competitive on the track, but when we are off the track we are good friends.

Q: You were the youngest rider to win at Loretta Lynn’s, at age 5, and you still hold that record. Did the magnitude of that win resonate with you? You must hold that title pretty close to your chest.

RD: Yes, I’m still the youngest to win Loretta Lynn’s at the age of five and then back it up with another win at six. When I won the championship at five, I remember people asking me if I realized what I had just done. I told them yeah, I won a race. (Laughs.) Obviously, it was more than just a race.

Q: What was your first reaction when you found out you got the Jimmy Johns Sponsorship?

RD: When I found out I got a Jimmy John’s sponsorship, I was surprised. I was going to have the same big sponsor that Kevin Harvick has. I thought, “Nice, I get free sandwiches.” I didn’t realize they were going to help with my racing.

Q: The racing community has some serious talent — who do you look up to and try to emulate?

RD: The supercross and motocross pro I look up to is Ken Roczen. He is an awesome rider, plus he still acts like a kid. He is overcoming a tough injury right now. That makes me believe I can do anything I set my mind to and that I should never give up.

Q: What do you like to do for fun other than ride?

RD: When I’m not riding I like to golf, ride go-karts, fish, play with my Traxxas cars, ride my scooter, make dirt jumps and hang out with my friends.

Q: We need to talk about your hair – it’s amazing.  Is it your trademark? Any chance we’ll see it gone anytime soon?

RD: My hair is my trademark. I’ve never had short hair; my mom said I was born bald, but I don’t believe it. I want to cut my hair every once in a while, but it probably will never happen.

Q: Being a consistent presence on the podium, you must get to meet a lot of people you consider celebrities. Do you still find yourself star struck at meeting any of them?

RD: I don’t think I get star struck because I feel that those superstars are just ordinary, normal people like myself who work hard at what they do to become famous.

Q: Is there anyone in particular who, if you met, would just leave you speechless?

RD: There is a guy named Casey Neistat who is a filmmaker and co-founder of a multi-media company named “Beme.” I would love to meet him.

Q: Do you find there is a lot of pressure on you to perform, because there’s so much attention on you and your ability to win?

RD: I don’t really ever feel pressure; I know what I have to do to get the job done. Maybe once and a while when I race the older kids.

Q: How do your parents feel about you being in such a competitive and dangerous sport at such a young age?

RD: My parents know that I love dirt bikes and that I love to race, and they really support me. My mom doesn’t like how dangerous it is and that I always have a target on my back.

Q: How many bones have you broken?

Q: When on the track, what are your favorite components of the race (jumps, corners, etc.)?

RD: My favorite obstacles on the track are probably the jumps because they are fun. I like to see how much style I can have, but that doesn’t win races. I’m best in the corners because I have good speed and I flow.

Q: You have a good relationship with your mechanic, but could you take your bike apart and put it back together on your own?

RD: I have a very good mechanic, and he is also someone I look up to, but no, I couldn’t take my bike apart and then put it back together. That’s for him to do. I can check tire pressure, lubricate my chain, tighten bolts and put gas in my bike, and that’s about it.

Q: What’s the next step in your career?

RD: My next step is racing the older 85cc class, which is ages 9-12 and 12-13. I’m also getting comfortable on a supermini, so I can race the Monster Energy Cup in Las Vegas.

Q: Most kids your age are sitting at home, playing X-Box, going to the movies or hanging out at the mall.  Do you ever feel like you’re missing out on those activities because of how much you travel?

RD: We travel a lot, but most of my friends race dirt bikes and live around the U.S., so when I see them we hang out and catch up. When I am home I can go to the movies and do what normal kids do.

Q: What’s your favorite track and why?

RD: My favorite track is in Ponca City, Oklahoma. It’s a really fun track; I like the jumps and turns, and the dirt is awesome.

Q: Given the opportunity, who would you want to race against?

RD: If I was given the opportunity to race someone, I would like to race a pro rider named Jason Anderson. I think he is a fun guy and we have a similar style.

So, fear not! Ryder DiFrancesco goes to the movies, eats popcorn and candy and hangs out with his friends. He’s also a force to be reckoned with, so keep an eye on this kid!