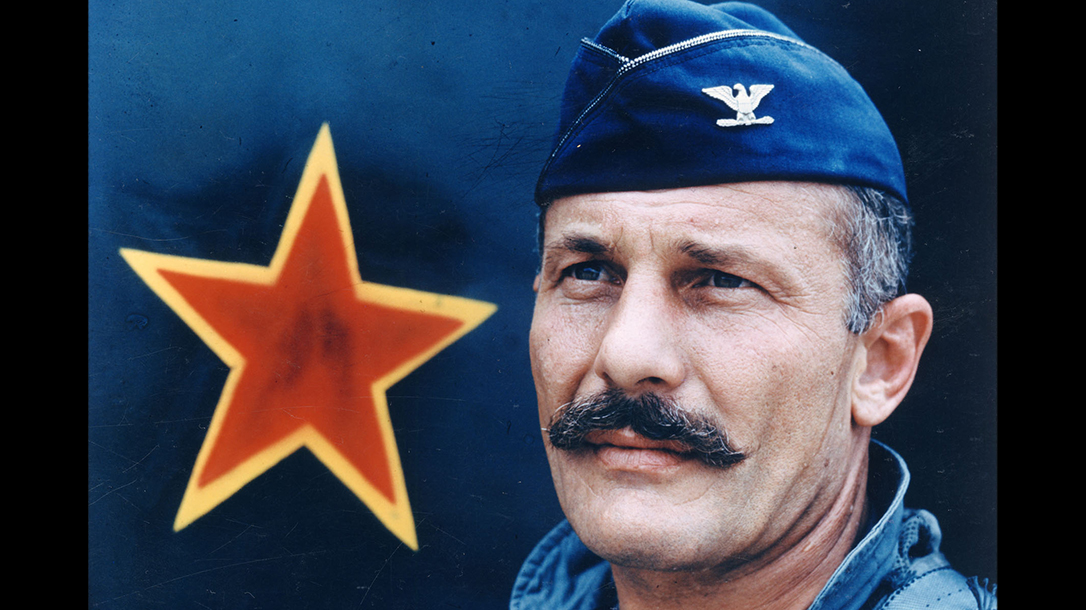 (Photo by US Air Force)

Robin Olds: The Only Airman Able to Wear a Mustache During Vietnam

Robin Olds: The Chosen One

When Air Force Col. Robin Olds took over command of the 8th Tactical Fighter Wing based in Thailand in 1966, he was disheartened to see the lack of aggression in the American airmen stationed there. Within a year, the unit would be transformed by the fighting spirit of their commander. They would score the greatest aerial victory over North Vietnam up until that point in the war.

Most importantly, the magnificently out-of-regs mustache Olds wore as a “middle finger to dogmatic military leadership would be reborn every year, even after his death, when airmen grow their mustaches to honor him during “Mustache March.”

Robin Olds was practically the chosen one of the U.S. Air Force. His father had fought in the skies over Europe in World War I and his childhood home was often visited by legendary airmen like Carl Spaatz, a friend of his dad’s. When Olds graduated from flight school, it was Henry “Hap” Arnold – the only person ever to achieve the rank of General of the Air Force – who pinned on his wings.

By the time Olds was sent to fight in the Vietnam War, he was 44 years old, but had lost none of the fire that fighter pilots tend to display in the cockpit. The problem was the rest of his unit was tired and low on morale.

Olds was also an old-school fighter pilot in an Air Force dominated by bomber generals who were also obsessing over nuclear warfare. But in Thailand, Robin Olds ruled like a king. He shook up the support staff and took a more personal interest in the lives of his airmen – even if that meant tipping some beers with them.

The worst part was the Air Force was taking a beating in the skies. North Vietnamese pilots were skilled fighters and the presence of Soviet early warning systems in the north meant their MiG-21s were waiting for the Americans by the time U.S. aircraft reached a target. The MiGs were able to avoid American fighters and play hell on the bombers.

Olds began growing the mustache that became known as “Bulletproof” in March of 1965. Not long after he arrived at Ubon Royal Thai Air Base, where the 8th TFW was stationed, it became so popular that all the men began wearing one. No one ever told him he was out of regs. Even the generals laughed it off. There were more important things to worry about so far from home.

To further turn morale around, he replaced his deputy commander with another Air Force legend, Daniel “Chappie” James. Chappie trained the all-Black Tuskegee Airmen of the 99th Pursuit Squadron for combat in World War II. Although he didn’t see any WWII combat, he flew

101 missions in the Korean War and would later become the first-ever African-American four- star general in the U.S. military.

The Robin Olds- Chappie James team was so effective among the men of the unit and in the skies over Hanoi that they became known as “Blackman and Robin.”

But personally, he was frustrated at the restrictions Washington forced on the Air Force, and, specifically, Olds and his men. A constant refrain in Robin Olds’ posthumously-published memoir, “Fighter Pilot” was that the brass “wouldn’t let us win the war.”

Olds never gave up on his vision of what the Air Force needed, however. He wanted a well- trained, aggressive force that brought the fight to the enemy – and he was determined to kill some MiGs before he was sent home. After seeing the North Vietnamese strategy of constantly avoiding American F-4C fighters and instead focusing attacks only on F-105 Thunderchief bombers, he conceived a plan to exploit that tactic: Operation Bolo.

Bolo was the chance for Olds and the 8th Tactical Fighter Wing – the “Wolfpack” – to kill some enemy MiGs. Using specialized radar pods that normally were used on the F-105 to fit on the F- 4C. With these pods on the wings, the fighters would fly into North Vietnam in an F-105 formation to fool the ground radar into thinking the F-4C Phantoms were really the slower F-105 Thunderchiefs.

Olds would lead the first flight of seven under the callsign “Olds.” Keeping with the make of car theme, Chappie would lead the second flight under callsign “Ford” – because Bolo planners thought Fords were “big, black, and fun.” The five other flights also used car names and all would arrive over the target four minutes apart.

The goal was to get the MiG-21s into the air and engage them before they figured out they were outmatched, then take as many down as possible. When the day came, they flew the exact route and altitude of Thunderchiefs on a bombing run. Within minutes, the communist MiGs were coming at them.

“Ok, Wolfpack! Go get ’em!” Olds called over the radio as they sprung the trap. The seven wings engaged the MiGs immediately as another Fighter Wing approached from the east to prevent the enemy’s escape. Seven enemy fighters were shot down, and the Americans lost no aircraft.

Robin Olds returned from Vietnam with four official kills, one shy of being an ace. Many believed he had many more, but intentionally kept from being an ace so he wouldn’t lose his command.

When he returned to the United States, he reported to the Pentagon where he met with Air Force Chief of Staff Gen. John McConnell. McConnell stuck a finger under his nose and said simply, “Get rid of it.”

Olds replied with a “Yes, sir,” and that was the end of Olds’ mustache.