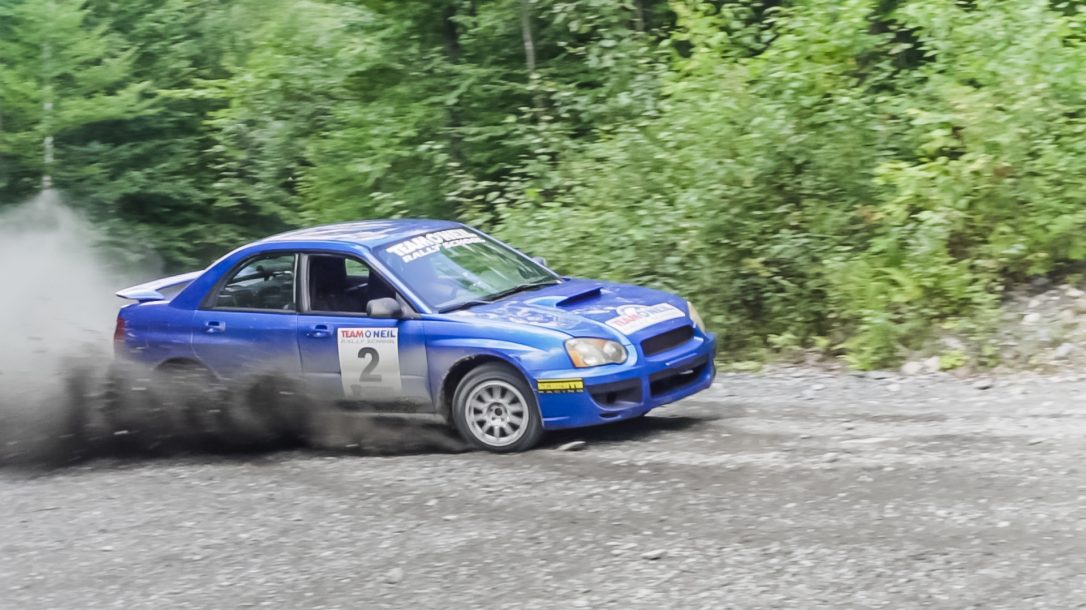 It’s time to make a confession. I have never personally owned a manual-transmission car. For a guy in his mid-40s, that’s damn near heresy. That’s not to say I don’t know HOW to drive a stick, I’ve just never had a car with a manual transmission in my name. My ex-wife had a VW Jetta that I used to drive from time to time, but outside of that, my entire driving career has been blissfully automatic.  I didn’t know what I was missing. Thanks to the Team O’Neil Rally School, things were about to change.

I’ve never really been a car guy. My dad put himself through college working at a gas station, and I remember the pride he had in his 1968 Dodge Dart as he would whip us around in it as kids. As a four- or five-year-old, I’d “help out” from time to time as he worked on it, but it was mainly me bringing him a beer and watching him slide under the car. Minutes later, he would come back out covered in grease and oil. As much as I wanted to, I didn’t get it. So, yeah, I’m definitely not a gearhead.

When I was presented with the opportunity to go to a five-day rally school at the world-class facility at Team O’Neil Rally School in Dalton, New Hampshire, I jumped at it. (Then I stalled out because I didn’t work the clutch right, but then I jumped at it again.) Perhaps the Universe would allow me a chance to redeem myself.

The purpose of the school — started by legendary rally driver Tim O’Neil — is to introduce people to the sport of rally racing. It allows drivers of all abilities to experience what it’s like to drive a rally car in changing surface conditions. There’s no expectation that every driver will immediately jump into the sport, but rather that his or her skills will be immediately transferrable to daily driving, no matter where you live or what you drive.

The truth is, I had been to the school several times over the past few years to take part in the Precision Rifle Series New England match, but had never jumped in a car. The PRS course that they’ve created provides long-range shooters with one of the most challenging courses of fire in the country, but this doesn’t disturb or take away from any aspect of the driving school. In fact, there will soon be some shooting-related additions to the facility, including an exclusive partnership with Ridgeline, the premiere precision shooting company in New England, which also runs an additional gun range directly across the street.

Improvements to the Team O’Neil precision rifle course involve several new shooting lanes all the way out to 2,000 yards — that’s over a mile, if you’re doing math. With expansion plans, the whole place is like an alpha-male paradise.

Arriving on day one, my eleven fellow students and I settled into a small classroom. We were a mix of ages, backgrounds and skills. Some students were here to seriously improve their rally driving. While some came for fun, and others on a “guys’ weekend,” all of us were here for the first time. Travis Hanson, champion rally driver and Director of Training at the school, was our classroom guide before handing us off to the instructors. The rules at Team O’Neil are pretty simple: Stay on the road, don’t break the car (or yourself), know your equipment, know your limits, know your instincts and drive without emotion.

In his overview, Travis started throwing terms at us like “pendulum turns,” “left-foot braking,” “trail braking,” “apex lines” and so on. Most of us were like, “Yeah, whatever, we took our SATs in high school … let’s get in the cars.” That attitude is exactly what you DON’T need going into this school. Check your ego at the door.

After the brief overview in the classroom, we headed out to one of the facility’s two 300-foot diameter skid pads. Most of the day was spent in FWD Ford Fiestas just driving in circles. We worked on our left foot braking techniques, which entails keeping the gas floored with the right foot and controlling your speed with your left foot on the brake. Spending most of the time in first and second gear, we weren’t exactly going very fast. However for someone accustomed to ABS brakes, working the manual brakes of the Fiesta was something to get used to. It took me quite a while to start feeling my way around the circle without it being herky jerky and slamming us all forward into the dash. That’s as easy as it got all week.

The instructors double as a grounds crew, and they regularly jump onto John Deere tractors to re-grade the loose surfaces of the skid pad and roads, keeping them nice and slippery. A commercial water truck follows the tractors to wet down the track and make it extra devious.

In the afternoon, we were back on the skid pad, which now possessed a small slalom course of cones. The goal of the slalom is not to create cone-carnage with the gas to the floor. Instead learning to brake until you’re pointing where you need to go, then releasing the brake so that you’re linking your turns together. Supposedly, you’ll slide right in behind that cone. Sounds easy, right? It is. All you have to do first is break thirty-plus years of traditional driving habits. That’s just day one.

Throughout the five days, students are walked through a progressively more difficult set of challenges. As skills increase, so does the difficulty of the material presented. Front-wheel drive Fiestas get swapped for all-wheel drive Subaru WRXs, which then get swapped for mid-90s rear-wheel drive BMWs. As you’re exposed to the different types of car and their drivetrains, the nuances of what you have to do become infinitely more important. Braking techniques become more refined and all of your deficiencies expose themselves like Louis CK in a comedy-club green room. However, there is a common saying at the school, and it goes something like this: “Blah, blah, blah … accelerate!” Cut the excuses, concentrate on your shit and just drive.

I Made The Same Four Mistakes, Over & Over

By the end of the week, there were only five drivers left. Team O’Neil allows you to take as few or as many days of instruction as you’d like. You’ll certainly gain significant skills whether you take one day or all five, but the smaller group definitely had the advantage of getting more reps and this allowed the class to progress much faster. On the final day, we were able to choose the car we wanted to drive for the entire day. I chose the BMW because I had been performing the best in it.

Sliding into day five, we were driving up and down the mountain on ever-faster and more dastardly circuits. Once we thought we had the course mastered, the instructors would have us drive it in the opposite direction, so we wouldn’t get used to only attacking a problem one way. It was at this point that I was actually starting to feel like a rally driver. The instructor would call out what turn was upcoming, and I just instinctively reacted. I felt myself really using the car up to its potential, sliding around corners like an incredibly inferior Ken Block. I was ripping through turns that just a week earlier I would have approached slowly. Now, I would just hammer down, apply some brake, counter steer and Tokyo drift my way around the mountain. Rad!

Beyond the cool factor of driving alongside world-class instructors who are also actual racers, I learned amazingly valuable skills that I can use back home on the wintry backroads of Maine. I am now far more confident in my loose-surface driving, and the Team O’Neil Rally School reignited me. The desire to get a 1992 BMW 325i, put a roll cage and better suspension in it, and just rip.

Like most high-end sports, you can spend all the money in the world to try to buy your way into the winner’s circle, but nothing replaces sheer skill. The first step to obtaining those skills is to head to Team O’Neil Rally School. You’ll never drive the same way again — and that’s a good thing.

If you want to know more about living the alpha style, you can pick up a back issue of Skillset Magazine at OutdoorGroupStore.com. You can also check out our weekly podcast, Skillset Live or our gun podcast, Center Mass!