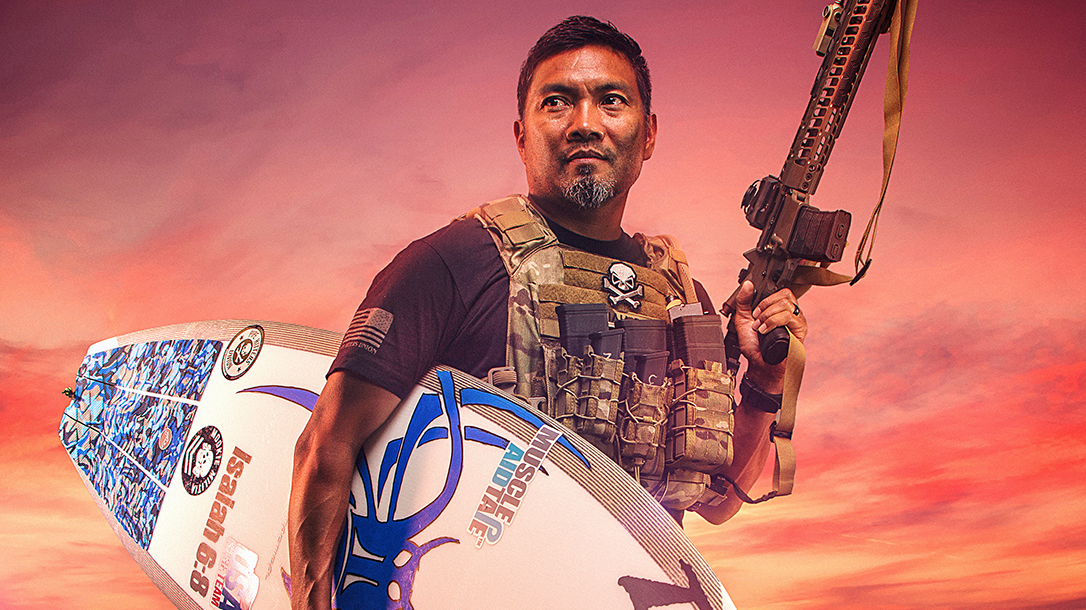 Q&A With Rick Takahashi: The Only Surfer Sponsored by a Rifle Company

USA Masters Surf Team member Rick Takahashi holds 10 national titles and is well respected among SoCal locals. On a beautiful day you can find him aggressively carving waves or mentoring young surfers. Rick is a man of God who wholeheartedly supports the Second Amendment. A love of God and guns doesn’t fit the mold of a typical California surfer. Then again, there’s nothing “typical” about a man like Pastor Rick.

Skillset:You grew up on the east side of San Diego County where most people don’t surf. How did you pick up the sport?

Rick Takahashi:I started out skateboarding. All my friends and I skated all over Santee. When it got really hot outside (like it does in East County, San Diego), we figured getting in the ocean was a good way to cool off. That’s pretty much how I started surfing. After a year of surfing I entered my first contest.

Skillset:What’s the hardest thing to learn about surfing?

Rick:It’s easy to stand up on the board, but to actually ride a wave takes a lot more effort than most people realize. I would say the hardest thing I’ve learned is doing big aerials or riding barrels. Both are really different, but both have perfect-timing issues that are hard to learn.

Besides the timing on barrels, your positioning is crucial.

With aerials, get ready to get hurt because it’s coming. I tell my friends that you have to be willing to break boards and get injured! As the saying goes, “People who take great risks achieve great rewards.”

Skillset: Are there actually “locals only” surf spots where an outsider will get a beat down for infringing on their turf? Or is that only in the movies?

Rick:That’s a funny question because absolutely there are local spots, and you’d better respect the locals. I used to paddle out and tell people, “The party’s over” and “Get in the back of the line”! There’s a pecking order, even in the local lineup. As a grom (kid) I use to get dunked and punched for doing stupid (and dangerous) things and for disrespecting the locals or getting cocky. I don’t see that happening as much nowadays.

It instilled a great respect for the surfers (and for the ocean).

Skillset:You have won 10 national titles and had an undefeated season in 2012. What mental prep do you go through before you compete?

Rick: Two weeks out I start going to bed early. I make sure to watch what I eat and do explosive workouts with some weight training. The final week I do more cardio and my diet is strict (no soda or processed sugars).

Skillset:You are also a member of USA Masters surf team. Why isn’t surfing in the Olympics?

Rick:There are three different teams on the USA Surf Team: Under 16, 16-35 and 35+ (that’s what I’m on). The contest series in the ISA (International Surfing Association) is our Olympics of surfing. The ISA is recognized by the International Olympic Committee. In 2020, surfing will be in the summer Olympics in Japan for the first time. I won’t be competing, but I hope to travel and be with the team (either coaching or capturing video footage, which is my full-time job).

Skillset:You are the only surfer we’ve heard of that is sponsored by a rifle company. Tell us about that relationship.

Rick:This is a long story but I’ll make it short. I was at Shot Show one year and met Ben “Mookie” Thomas with Spikes Tactical and we hit it off and became friends. After about a year I saw him again in Tennessee. We hung out and talked about guns and God.

Since Spikes Tactical makes the “Crusader,” it seemed like a good fit.

It’s not just hunters, military and competition shooter that are buying rifles; almost all my friends and family members are gun enthusiasts.

Skillset:Do you participate in any firearms training?

Rick:Yes, definitely! I’ve been part of the Camden Mafia since I trained at Tactical Response with James Yeager. James and the crew are great instructors and great people to be around. One of the classes that helped me the most was James’s “Force on Force” class where we’re put in real-life scenarios, and I was surprised at how quickly I made poor decisions with my gun.

It was very humbling and a great learning experience.

I went to alumni weekend once and got to teach a ham radio class, giving some info on the basics of communication. I consider myself a prepper, and I feel that we should all be preppers. One of my favorite Bible verses, Luke 22:36, says it all: “Then He said to them, ‘But now, he who has a money bag, let him take it, and likewise a knapsack; and he who has no sword, let him sell his garment and buy one.’”

Skillset:Every red-blooded American should have a few heaters in their safe. What’s in your arsenal?

Rick:Oh, the meat and potatoes! Well, you know I have a Spikes “Crusader” and then from teaming up with Pipe Hitters Union I have a “Pipe Hitters” rifle by Spikes Tactical. I have a RAZ 47 with an awesome Dynacomp in front of it. Everyone has Glocks, and so do I, with the new CMC triggers on them. I have a Remington 700 in an AB Arms MOD X chassis, and then everyone has a moped so, yes, I have a 10/22.

Skillset:OK, back to surfing. Is there a science to reading waves?

Rick:After listening to Travis Haley on your podcast, I feel like I’m a student of the game and very technical with how I surf. We watch footage on form and mechanics, and then I’m always watching what the waves are doing as far as tides, waves in sets and changing conditions. For example, if the tide is higher, I’m looking for the second or third wave in the set (that takes a little more water off the sandbar and makes a steeper wave).

I’m always looking to see if I should switch equipment or use greater volume boards to adjust to conditions.

Skillset:Outside of the United States, where have you surfed?

Rick:Besides Hawaii, I’ve surfed Samoa, Mexico and Bali. In 2002, terrorists bombed Bali. If they had done it 30 minutes later, I would have died.

Skillset:What’s your opinion on big wave riders? Do they all have a death wish?

Rick:Riding big waves is so amazing and I wish I still had it in me to charge as much as I used to. A lot of the current big wave riders are older guys and I don’t know how more people don’t get hurt because they are so crazy! The biggest waves I have surfed were Waimea Bay, and that was big enough.

Skillset:You’ve been the La Jolla High School Surf Team coach for the last seven years. The fact that a high school has a surf team is badass in itself, but what motivates you to teach these young wave riders?

Rick:When I was growing up surfing, I never had someone I respected take time to give me advice or just be there for me.

I believe God gave me my surfing ability so I could give back to others, which includes giving back to the younger generation of surfers.

Skillset:Have any of your students turned pro?

Rick:A couple kids are competing at very high levels, attempting to make it to the pro level, but I don’t think their success is from me. They’re very talented at what they do. I do think that if they listened to me more, they would be more successful.

Skillset:We see that you are a man of God and a leader in the church, but your Sunday service is far from the norm. Tell us about The Rock Church Surf Ministry.

Rick:I’ve been leading the ministry for around five or six years now and as any good leader, I’ve surrounded myself with a lot of really solid Christians to help me. I built a leadership team where people can step in and take over for me at any time. We all have different strengths and we complement each other really well.

I believe God is using what the devil intended to destroy in me for His glory, and I don’t take a second for granted.

I’m thankful for every moment. I surf, so obviously, I use surfing to relate to people that surf; it’s pretty simple, actually. Everyone needs to use their experiences and passions for the greater good. All glory to God! Isaiah 6:8.

Skillset:So what’s left for you in the sport of surfing? Are you ever going to retire from competition? Talk to us about the future.

Rick: I’ll always be a competitor and have a fire inside to always be pushing my body and mind to the limit (whether it’s surfing, shooting or anything else). Earning 10 national titles and lots of records is great, but records are meant to be broken. Besides surfing in my future, I’d like to connect the shooting industry with the surfing community and bridge the gap between the two groups. 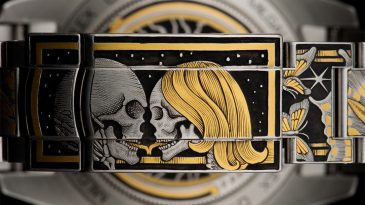