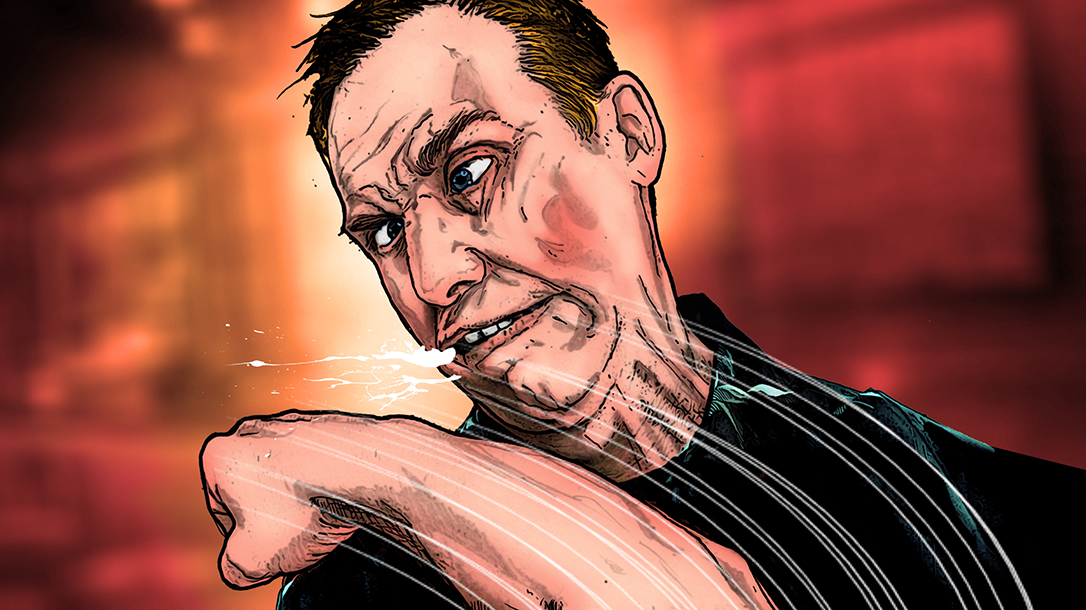 The Art of the One Punch Knockout With Bas Rutten

Our goal when we go out on a Saturday night is to have a good time. In the same vein, who doesn’t like to add a good bar brawl? You know, the type of fight you dominate with a one punch knockout! When you mix alcohol and testosterone, someone in the room is going to end up on the floor. We all live by the old adage, “Better them than you.” So, what are the best places on a head to knock somebody out? Let’s find out so you can get back to that Jägerbomb you just ordered.

Where You Should Hit for a One Punch Knockout

There are three places you should aim for if the one punch knockout is your goal. Here they are:

Most people will throw a hard jab and hit someone on the front of the chin. Clearly, it’s a good shot that usually works. In this case, hit the chin at an angle so that the head snaps to the side. A hook or uppercut are really preferred and will shake up the brain even more. Do it right and there is a good chance the synapses in the brain will disconnect. The end result is your desired KO!

The Trigeminal Nerve (aka the 5th Cranial Nerve)

This nerve connects at the “temple of your skull.” You know, the spot where you rub yourself when you have a hangover. Getting whacked here resets the brain and usually turns out the lights. Ideally, you can hit those spots (one on each side) with a hook, overhand right, back fist, palm strike (thrown at an angle), roundhouse kick or spinning back kick to the head.

Back of the Grape

In professional fighting, it’s illegal to hit the back of the head. Imagine you have a Mohawk that runs down to your neck. You cannot hit where the Mohawk is, however just outside the Mohawk is still super effective (and legal). I have knocked out a whole bunch of people like that. The best punch for this is a clothesline or palm strike behind the ear. In general, fighters are trained to deal with impacts from the front and side of the face, not to the back of the head. It is a super effective punch, and they will not be ready for it.

Where You Should NOT Hit

Similarly, there are a few places you shouldn’t hit for a one punch knockout. Some will leave you doing more harm than good.

If you saw the movie “Hard Times” with Charles Bronson (which was about bareknuckle boxing), you saw a guy who caught all the shots that his opponent aimed at his chin on his forehead. He would simply lean over with his head so that his “chin” became his “forehead.” Your forehead is super strong and the bones of a hand, in comparison, are weak. This means that most of the time, the forehead wins and the hand usually breaks. If you must punch someone here, hit with palm strikes, but even that is not recommended.

Now everybody is saying, “What? The nose is a great place to hit somebody!” Yeah, but it’s not a KO shot, and we are talking about a knockout, right? A nose shot will fill your eyes with water, but I have never seen a fighter lose because of one. In fact, if it’s a professional fighter you’re up against, I think he might get even angrier and come back harder. So, on the street you can take the risk, but if that person is somebody who trains and competes I say, “Go for a KO” and find the knockout spots I discuss above.

Top of the Head

This is one I would definitely avoid. Imagine your adversary just dropped and wants to get back up. Instincts say to hit him on the top of his head with your fist. Know that you’re taking a serious risk of getting your hand broken. Don’t do this, especially if you are fighting multiple opponents. There is a lot of adrenaline involved, and you are just mowing as hard as you can. Smashing the top of his head can break your hand and kill your momentum in a fight.

About the author: Bas “El Guapo” Rutten is a retired mixed martial artist (MMA), Karate and Taekwondo blackbelt, and Muay Thai kickboxer. He was a UFC Heavyweight Champion, a three-time King of Pancrase world champion, and finished his career on a 22 fight unbeaten streak (21 wins, 1 draw ). The UFC inducted Bas into its Hall of Fame in 2015!

Fun fact: Bas Rutten AKA “El Guapo” was our very first podcast interview on Skillset Live back in 2017! Take a listen, and make sure to visit OutdoorGroupStore.com to find back issues of Skillset Magazine!