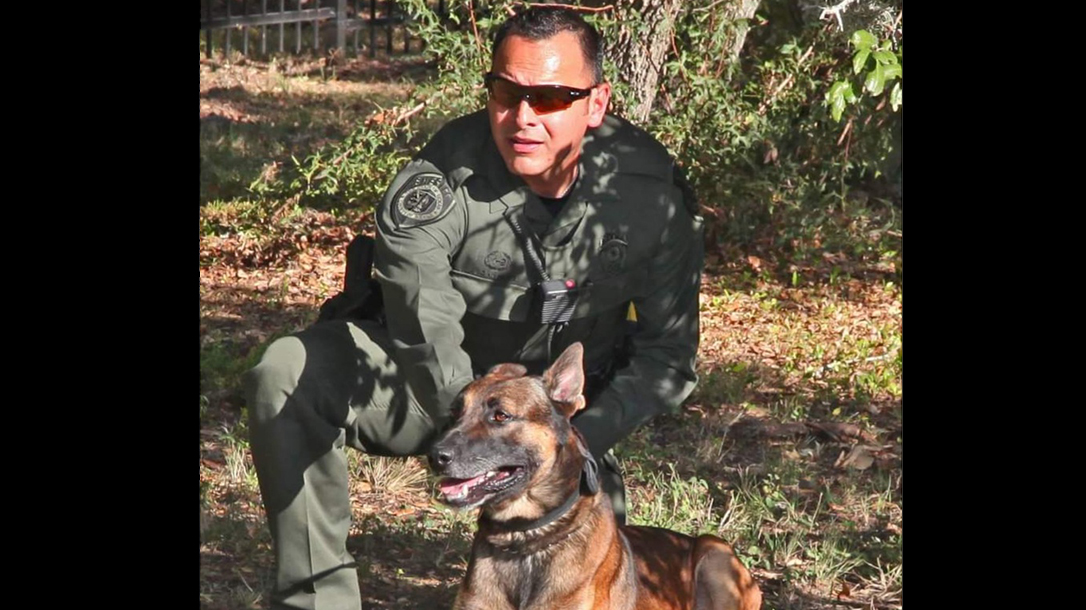 (Photo by Courtesy of Deputy Canales)

On May 18, 1972, in San Antonio, Texas, Officer Antonio Canales got ready to leave for work. He said goodbye to his two young sons and kissed his wife, cupping her belly. She was just six weeks pregnant.

Later that day, he was on patrol when the call of an armed robbery at a gas station came in. Canales saw a vehicle that matched the description of the suspects’ car and stopped it. As Canales approached the vehicle, the passenger, Eugene Spencer, spun out of the car with a sawed-off shotgun. Before Canales could get his service weapon out, Spencer shot him in the chest. He fell to the ground but was able to fire six shots as Spencer and his accomplice, Edwin H. Bates, fled in their vehicle.

The suspects ducked down in their vehicle to avoid Canales’ shots, causing Bates to crash into a U.S. Route 90 concrete support. Both Spencer and Bates bailed out of the vehicle. Canales crawled to his patrol unit to radio for assistance. When officers arrived, Bates surrendered. Spencer was located the next day. Canales died within a few hours.

After his death, Canales’ wife gave birth to a son, Joseph, who followed in his father’s footsteps and became a police officer in Bexar County, Texas. In 2015, Joe Canales, now a K- 9 handler, was a part of the street unit that had been formed in response to recent gang activity. Joe’s assignment within the unit was to kick rocks and turn over stones to uncover the scorpions and snakes within the community. During a routine work day, a call of a suspicious person at a gas station came in, and Joe and his K-9, Tex, were dispatched. As Joe pulled into the lot, he saw several cars and a number of people hanging out in the area.

Evil Lurks In All Directions

Joe saw one guy pacing around. The guy spotted Joe and headed to a nearby apartment complex where he went between cars and disappeared. Shortly thereafter, Joe turned his patrol car around and saw the guy in the street. Joe quickly parked, and as he exited the squad car to conduct a field interview, the suspect opened fire. Joe never saw the gun. The first round hit him in the right forearm. “Shit, I’m in a gunfight,” he realized.

That shot disabled his entire right arm. Although Joe reached for his gun, his arm was not working, and he couldn’t get his weapon out. The second round hit him in the right side of his chest. Blown back, the shot felt like a sledgehammer. His inner voice screamed at him to get out of the line of fire. As Joe went around his vehicle for cover, his assailant chased him, shooting. Joe’s squad car was hit five times. Tex was in the rear cage, but luckily, Joe had hung Tex’s vest on the cage, which saved the dog’s life.

During the encounter, Joe radioed in his location and that shots had been fired. He also kept trying to get his weapon. Even though his holster was slick with blood, he used his left hand to cross draw. His level III holster made the gun hard to get out, and his heart raced. Joe went down on his knee, finally got his gun out and saw the bad guy coming right at him. He leveled his weapon, but the assailant turned and ran when he saw Joe’s gun.

Joe did not fire; there were too many bystanders nearby, and he didn’t want to endanger any of them. He did, however, give a suspect description right before the cavalry arrived. Eventually, the gunman was found and arrested.

Joe’s injuries have since healed, and he is back on patrol. He works with his academy doing reality-based training, SIMS training, etc. He explains to his trainees that “This is the time when you need to focus, so you can rise to the occasion. We play chess—bad guys play checkers.”

Officer Antonio Canales was 29 years old when he died. Joe was 29 when he began his career in law enforcement. Both were in shootouts involving gas stations, and both were hit in the chest, but Joe survived because he was wearing a vest. What makes this story even more emotional, in my opinion, is that both men felt they had been called to be police officers. That sense of duty brought them into a violent world, killing one and wounding the other. Yet both father and son exemplified the highest principles of honor, dedication and service to their communities.

Joe told me that he heard his father telling him to move after he had been hit. While he never met his father, Joe knows his dad looks over him. He explains, “My Dad passed the torch to me, and my job is to make it to my retirement and know that we made it to the end. Then I can say to him, ‘We did it, Pop. I hope I made you proud.’”

Brian Murphy is a former Marine and retired police lieutenant known for actions at the Wisconsin Sikh temple active-shooter event in 2012. He currently runs the Saves Program for Armor Express ballistic vest company and serves on the Presidential Medal of Valor Review Board.