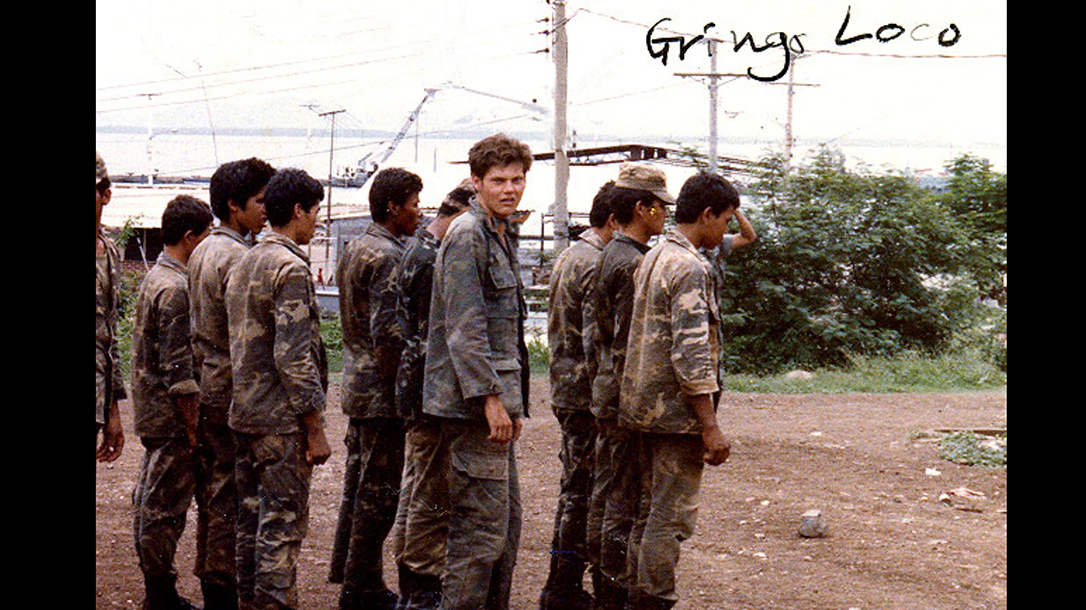 (Photo by Courtesy Of Cork Graham)

No Shit, There I Was Part 1: The Luck Of The Draw

Wrists and ankles bound, I did my best to keep the unstable longboat from tipping into the Lempa River. Drowning was the least of my worries. My biggest concern was the armed Salvadoran guerrilla at the bow and another paddling on the stern. I had to plan my escape right. Too far out from the bank, and I wouldn’t be able to snatch the Galil hanging from the young man at the bow. Too close and they could all get footing on the bottom and shoot me right there.

I ran it all over in my mind, getting everything squared away. The guerilla paddling at the stern would drown—it was clear from what he had said and how uncomfortable he seemed in the boat that all that had to happen was for him to fall into too-deep water and he’d be helpless. Feigning an inability to understand Spanish was paying off in spades. Then there was the man in the middle, seemingly the group’s leader by their deference to him. Heavily loaded down with an M16 and crossed ammo bandoliers, not to mention the grenades, the man would sink like a stone. Too bad for him that so many don’t get drown-proofing as children. Then there was the one right in front of him who had his weapon trained on me. All of them had that look of insecurity that good training removes. Even when they tried to feign calmness, their actions just screamed “fidgety-mouse.” I looked around, realizing I was where I wanted to be: Calm, that moment in a tense situation when you are sure you are going to make it, and yet the other half of the mind is not afraid if you don’t.

For only a second, concerns about killing someone barely big enough to hold the heavy, Israeli-made weapon gnawed at my conscience. I took a breath to appease these thoughts—there was no way out of this situation other than killing them all. There was only one way that this was going to happen, and that was here, in the river, brown and freshly swollen by the rainy season. If they got me to the other side, I would be walked right back to their camp, interrogated, and then I would end up like the other poor soul my team had encountered the month before—only recognizable by the blue eyes and a scrawling of misspellings left by the FMLN stating that the man, who had been peeled like a banana while still alive with his genitals stuffed in his mouth, had been a mercenario gringo.

That bloody corpse could have been anyone: an hijo del sol, a chele or a blue-eyed Salvadoran of German or British ancestry in the Salvadoran Army, of which there were many. He could have been a paramilitary officer with the Agency or Israel’s Mossad. He could have been just like me, a young American paramilitary officer leading pseudo-ops teams comprised of Latin-American operators and FMLN defectors against the communists. He also could have been one of a number of soldiers of fortune from the U.S. and Britain who thought they could get easy money fighting down in this Coffee and Shrimp War. If that gringito pobrecito was with MILGROUP or the CIA, I was surprised no word came across in the weekly briefings. Whichever reason, I planned not to end up like him.

Only an hour ago, I had woken up in a bomb crater, unarmed, stripped of my boots and gear and squinting at the bright morning sun. All I remembered from the night before was the battle of battles, the most brutal hand-to-hand fighting I had ever witnessed and experienced, followed by the sound of a Salvadoran Air Force A-37 called in for danger close support and then, perhaps, a flash. After that it was lights out. Clearly left for dead, with my kit stripped from me lest it fall into enemy hands, I quickly processed my anger at being left behind. (I would later learn they had barely made it out alive themselves.) I had a bit of fogginess that was hanging on in my mind from the concussion, and that worried me; I had to be in top form for what was about to happen. The training was there, but I had to implement it at the right moment with the right timing.

There were two big lessons I had learned five years earlier, in 1983, when I was captured and imprisoned for eleven months by the Socialist Republic of Vietnam. First, never let yourself be taken prisoner. Second, the more time that elapses after capture, the less likely you are to escape.

I looked back over my shoulder. What was a far and distant shore covered in lush green jungle was now close. If it was going to happen, it was going to have to happen now. I moved my gaze to the guard and stared him in the eye. The guard almost immediately became uneasy, ready to explode.

“No me mires!” he gestured away with the muzzle of his M16.

In a lightning strike, the ball of my foot pegged the guard’s chin, flipping his head back and to his right. Simultaneously, I shifted my weight and leaned to the upriver gunwale. The boat could not have caught water more easily. It flipped like a leaf in the wind, sending everyone into the water. Except for me, everyone was helpless and drowning.

Born for the water, I undulated my body, swimming like a dolphin for the young man. Switching ends just as I came upon him, as if getting ready to do another lap in a swimming pool, I clamped my legs around him, pinning his arms against his sides. There was no way he could work the trigger of his Galil, much less offer effective resistance. An anaconda couldn’t have done a better job of squeezing the air out of him. But the young man didn’t go easily. I gritted my teeth as I held tight, fighting not only him, but also the emotions ricocheting around in my mind. And then the last bubbles floated up from his body.

Lifting my head to grab a full breath, I used my legs to work my way around so that I could use my still-bound hands to get the sling of the weapon. With another move, I used my feet to slide the young man through the sling. (I did so gently, for some reason I even years later cannot fathom.) I pushed off the dead boy’s shoulders, and I broke for the surface and air. After a moment of floating downriver face down in the water to catch my thoughts, I let the unbridled elation at my newfound freedom course through me. Then, to calm myself back down and relax, I readjusted the rifle so that it lay lengthwise on my back, and then I headed for the nearby shore.

After a couple tests for the bottom, I finally set foot on sand and mud. Walking out, I cut the rope binding my wrists with the bayonet. Now all I had to do was get to the road and hopefully flag down a Salvadoran Army convoy…

The first time I would talk about this event, outside of my immediate report when I arrived at Ilopango Air Base, was more than ten years after the end of the Central American War (that those of us who were there called Vietnam II), during talks on escape and evasion to members of special-op units of the U.S. Army and Marine Corps. I also used it as the basis for a flashback scene in my first spy thriller of the John Corbett Series, published in 2013 (THE PANMUNJOM PROTOCOL).

Listen to our interview of Cork Graham on Skillset Live, Episode #110!