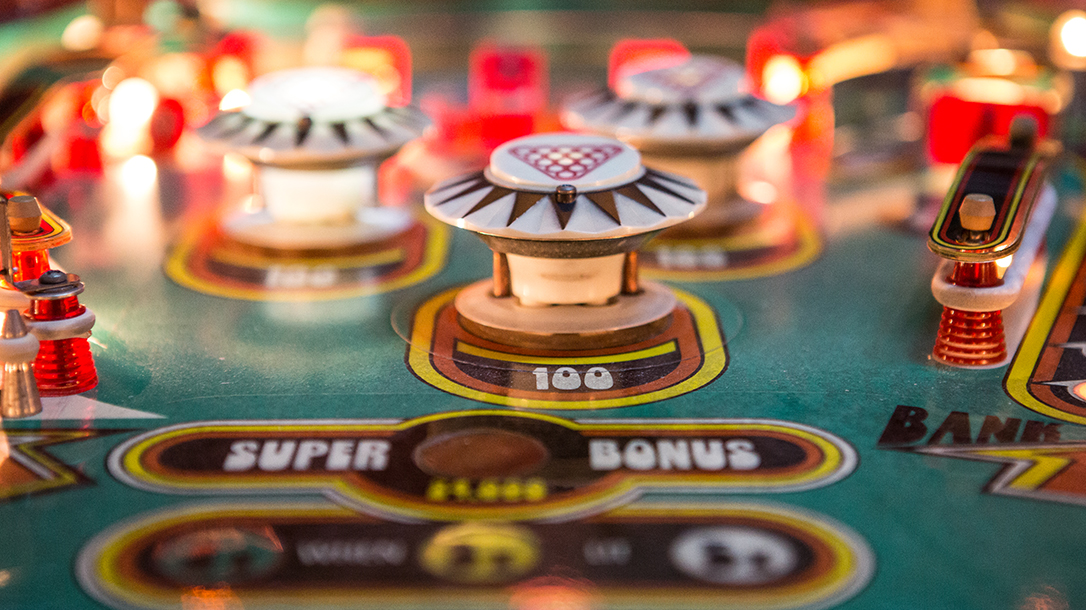 Our Skillset series “The Collector” travels the globe in search of the most interesting acquisitions on the planet. Check out our pieces on the golden age of comic books and the one of the largest Halloween mask collections you’ll find.

I will never forget the atmosphere of an arcade room. The sights and sounds always carry me back to my childhood. This was our version of social media in the 80s. Even though you had to physically get out and socialize with people, it pretty much worked the same as today.

You had a close group of friends that you invited into your circle. The words “I got next” was your status update, and you could even pin something to your “wall” by getting the high score. Those three-letter initials were a status symbol among the players in the game room. You could show the world that you were a badass, or else you took full advantage of the comedic potential of this spotlight just to display the words “ASS” or “DIK.” Either way, you had earned your spot among the elite. Then there were the competitions, the trash talking and even the flirting with the new girl in town. It all went down at the arcade.

Inside the Museum of Pinball

Installment two of our “Collector” series takes us to the desert town of Banning, Calif. It’s the home of the world’s largest pinball collection, which is right up Skillset’s alley. This 40,000-square-foot museum hosts every decade since the invention of pinball (and video games).

This trip sent us back in time — back to an era when the jocks, the geeks, the stoners, the skaters and even that hot foreign exchange student from Sweden all congregated in the same place. Now stack up your quarters and ready player one, as we welcome you to the Museum of Pinball.

Q: When did the doors open and who was the driving force behind its creation?

A:  The first time the doors opened was January 15-17 of 2015 for Arcade Expo 1.0. The museum’s vision was largely driven by John Weeks, the owner and founder of the Museum of Pinball. Kenny Hardy was the catalyst for and co-founder of Arcade Expo, which helped to open the museum and turned it into an event-operated establishment, instead of operating year-round.

Q: Tell our readers about the cool events you host throughout the year.

Our local favorite is our Halloween event called Pinball Madness, a three-day event that incorporates a massive, haunted funhouse themed after a deserted boardwalk inhabited by the living dead, plus mysterious carnival rides and games. This includes all 1,100-plus games on free play, costume contests, food, bars, music, magic and many other creepy fun layers.

Finally, we host the largest and most important pinball tournament in the nation in January; it’s called “It Never Drains in Southern California” (INDISC). Competitive pinball and professional pinball tournaments grew over 500 percent in 2017, and the best of the best travel to our tourney every year to battle for three days to settle who the top players in many categories are.

Q: Who runs the museum? Are volunteers a part of your operation?

A:  Museum of Pinball owner John Weeks oversees all operations, maintenance and inventory, with the help of co-founder Kenny Hardy and curator, Chuck Casey, who organizes the volunteers. The Museum of Pinball would not be possible without the generous contributions of our 80-plus volunteers, who repair and test all 1,100 games.

Q: With a facility that covers almost an entire acre, we have to ask what the cost to turn on the lights and power over 1,100 arcade games is?

A:  Between $2,000-$3,000 per day; that’s about 50 percent lower than previously after the installation of over 5,000 LED lights and other energy conservation measures. For now, the electricity costs alone make it restrictive to turn the machines on more than three or four times a year.

Q: Located only an hour from downtown Los Angeles, the Museum of Pinball has hosted its share of celebrities over the years. Who are some of the more notable visitors?

A:  Norman Reedus filmed an episode of his show “Ride with Norman Reedus” at the museum. He also signed our Walking Dead Pinball. Arcade celebrities Billy Mitchell and Walter Day from the documentary “The King of Kong” have visited. We predict that as the Museum’s popularity grows and the resurgence of pinball and video games skyrockets, we will have many more requests and visits.

Q: Which games are the most popular among visitors?

A:  The 80s and 90s Williams and Bally pinball machines, followed by the newest “latest and greatest” are visitor favorites. When it comes to the video games, it would be the tried and true Pac-Man, Galaga, Dig Dug and Donkey Kong. But again, all visitors have their favorites from their memories of playing at the boardwalk with that earned quarter, playing with their grandpa at the corner liquor store or hours of pushing buttons at bowling alleys.

Q: What are some of the most valuable pinball machines in the museum?

A:  The most valuable would be Magic Girl and Big Band Bar, which have held their values at above $15,000. Cactus Canyon, Circus Voltaire and a dozen others have values above $10,000. Some of the most valuable, though, are the ones that bring back memories for our attendees; it’s never about the money at the Museum of Pinball.

Q: Where do you acquire most of your games? Is it from private sellers or arcades that went under?

A:  We get them from many different sources, but lately, it’s been more from private sellers as we fill our museum’s empty spots, buying one or two machines at a time. Sometimes we’ll find something in better condition, but mostly our purchases will be for a machine we don’t yet have. In the past, we have purchased from auction houses, closing arcades and other collections.

Q: Do you have a team that repairs and refurbishes the machines?

A:  A very generous and dedicated team of volunteers maintains all 1,100-plus games. Most of our volunteers do this as a hobby; they perform maintenance and repairs, from cleaning the glass to deep-dive circuit board troubleshooting and component replacement. We have volunteers from every walk of life and many different vocations.

Q: What’s next for the museum and surrounding area?

A:  We are constantly adding pinball machines and video games, redesigning the flow and adding attendee features. We are also planning an expansion across the street with space for hundreds more attractions and games, as well as adding a huge adjacent parking lot to help us realize our vision of being open at least once a month.  And, of course, we will always work to continue fulfilling our mission statement of “sharing the collection with young and old, reliving memories and making new ones.”

Q: With the Internet, smartphones and Xbox, do you feel that arcade games will be extinct in 20 years? Or is it just the opposite?

A:  We believe there will always be a place in our minds and hearts for memories and nostalgia. Twenty years will only make our collection even more worth preserving as individuals sell and discard their old machines. In this sense, it’s much like the value of antique automobiles.