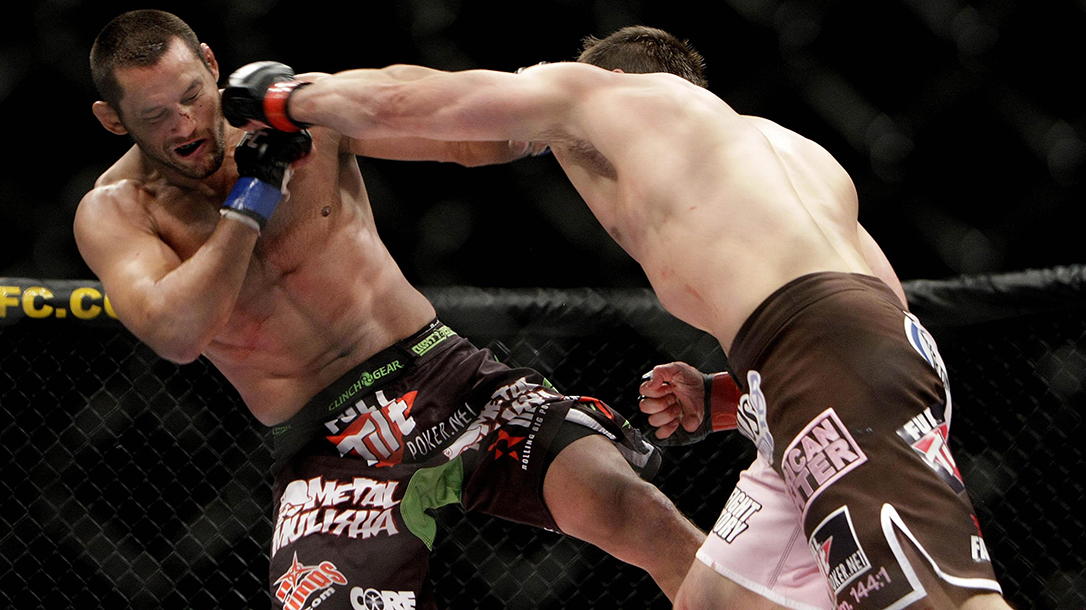 10 of the Most Powerful Punchers in Mixed Martial Arts

While there are a great number of skills and abilities different MMA fighters display, powerful punchers will always be the number-one crowd pleaser. Casual fans and the obsessed alike can’t help being stirred at a deep level after seeing one fighter KO another. Considering the 4-ounce gloves MMA fighters compete with, it’s no wonder punching power is such a huge part of the sport.

While there’s a lot that goes into what makes a punch powerful and it’s very difficult to compare fighters with similar power and tell who, in fact, has the edge, the following 10 athletes have set themselves apart for the shocking knockout ability they have with their hands.

Ngannou is one of the least experienced fighters on our list with a 16-3 record. He made his professional debut in 2013 and has taken heavyweight MMA by storm, compiling 12 knockouts total—including ten in the UFC—which is the second most of all time. Having recently won the UFC title by knockout over Stipe Miocic, Ngannou has effectively silenced all his critics. What criticisms could you possibly have of a 6-foot, 4-inch, 265-pound specimen like Francis, you ask? For one, he’s a pure striker, which means he’s not a skilled wrestler or BJJ practitioner. Second, his striking is not elite from a technical standpoint.

Francis is improving rapidly, however, but often he swings wildly, leaves himself exposed, and he doesn’t set up his strikes. But does it matter? Absolutely not. In MMA, where 4-ounce gloves are the standard, no man on this earth can take clean shots from this fighter. You would have a hard time making a case that God himself didn’t choose Ngannou to be the UFC champion, given his natural athleticism, size and power. His jaw-dropping knockouts of Alistair Overeem, Curtis Blaydes and Stipe Miocic leave no doubt. On any list of MMA’s most powerful strikers, Francis Ngannou is number one.

Derrick “The Black Beast” Lewis holds the record for most knockouts in UFC history with a whopping 12. His record is 25-7, and he has an unbelievable 20 wins by knockout. Lewis is another example of power being the great equalizer in heavyweight MMA. Although he’s made vast improvements over the last few years, Lewis is not known for a strong ground game or particularly technical striking. What he does have, however, is undeniable one-punch knockout power. He has finished contenders like Alexander Volkov, Travis Browne and Curtis Blaydes by knocking all of them completely unconscious.

The most powerful light heavyweight to make the all-time power list, Anthony “Rumble” Johnson was the UFC light heavyweight division’s most-feared knockout artist for a number of years. Originally a wrestler, Rumble made a transition to a rare, but not unheard-of style of defensive wrestling and power striking. Known for being very athletic, explosive, difficult to take down and extremely powerful with both punches and kicks, it’s no wonder Rumble has had so much success against the sport’s best. His record is an impressive 22-6 with 16 knockouts, including big names like Alexander Gustafsson, Antonio Rogerio Nogueira and Glover Teixeira.

Any discussion of power punching in MMA has to include the legendary Russian Fedor Emelianenko. Fedor has a record of 39- 6, but almost all of those losses have come recently in his more advanced age. He was essentially unbeatable in Pride FC back in the day, and some say that he is the heavyweight GOAT, which may very well be true. Fedor has a well-rounded game. He started in martial arts in judo and sambo, and he has good BJJ submissions as well, but he has a lot of power in both hands and isn’t afraid to trade punches. Fedor has an interesting style that features explosive, multi-punch combinations. In fact, he caught and KO’d the likes of Mirko Cro Cop, Mark Hunt and Andrei Arlovski.

Mark Hunt was an established kickboxer with over 40 professional fights and 13 knockouts before he began his transition to MMA. In 2010, the super Samoan made his UFC debut and spent years in the top 10 of the division before recently retiring. Facing that level of competition with a weaker ground game caused Hunt to lose a few fights, leaving his record close to .500 at 13-14, but he had 10 impressive knockouts. There are two things Mark Hunt is known for—incredible durability and devastating punching power. He was constantly aggressive and looking to finish his fights, taking pride in never stepping back. Given his granite chin and thunderous power, he was content to trade a shot for a shot when he had to, but he was actually a very technically sound striker as well.

Former UFC Heavyweight Champion Junior dos Santos is one of the best pure boxers and powerful punchers in UFC history. He is an athletic, mobile heavyweight with good timing, technique and legitimate one-shot knockout power. He has a record of 21-9 with 15 wins by knockout, and he has knockout wins over a prime Cain Velasquez, Ben Rothwell, Derrick Lewis and more.

Shane Carwin had the fewest MMA fights of anyone on our list, but he more than made his mark in his short UFC tenure. A collegiate football player and wrestler, Carwin was a good athlete and a massive man. Known for walking around between fights at over 300 pounds and needing a new glove size for his huge fists, Carwin was blessed with natural power.

Although he was never a very technical striker, Shane Carwin was known for hitting like a truck, and when he entered MMA, he had a long string of fights that never made it out of the first round. His record, when things were all said and done, was 12-2 with eight knockouts. He eventually challenged for the UFC title and lost an insane back-and-forth fight to Brock Lesnar. However he had notable knockouts over Frank Mir and Gabriel Gonzaga on his way to becoming on of the most powerful punchers.

Dan Henderson was an Olympic Greco-Roman wrestler before getting into MMA, but he discovered quickly once he transitioned that he had an extraordinary gift. While he had good power in both hands, Dan Henderson’s right hand was powerful to an ungodly degree—so much so it begot its own name: the “H-Bomb.” Henderson had a storied MMA career, including 16 knockouts in 32 wins. He had notable knockouts over Maurício Rua, Fedor, Vitor Belfort and many more. Henderson’s crowning moment—and one of the most stunning knockouts in UFC history—was his devastating KO of Michael Bisping in 2009. If you’ve never seen it, look it up.

in some of the organization’s greatest fights of all time before signing with the UFC. Rampage would eventually win the UFC Light Heavyweight Championship by knocking out Chuck Liddell. Rampage was a relatively untechnical striker with vicious knockout power. He’s known for being incredibly physically strong, one time lifting 200-pound Ricardo Arona over his head while stuck in a triangle and slamming him on the canvas, knocking him unconscious. Jackson is 38-14 with an impressive 20 knockouts. His most notable knockout wins are over Chuck Liddell, Wanderlei Silva and Keith Jardine.

Probably the original poster boy of the UFC, Chuck Liddell defined an era of powerful punchers in the UFC. His knockouts of Tito Ortiz and Randy Couture are iconic in MMA culture. Chuck was another wrestler who fell in love with his punching power and stopped wrestling offensively. His collegiate wrestling experience did, however, make his takedown defense tough as nails. With grappling off the table, everyone had to deal with Chuck’s punching power, and not many could manage. Chuck has a record of 21- 8, again, with most of his losses coming at the end of his career. Thirteen of Liddell’s wins were by knockout. He’s not higher on our list because he generally didn’t one-punch KO his opponents, but instead finished them with a barrage of punches. 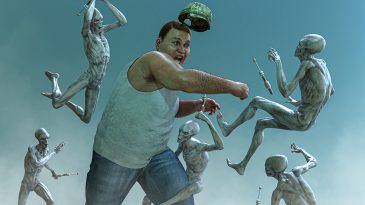