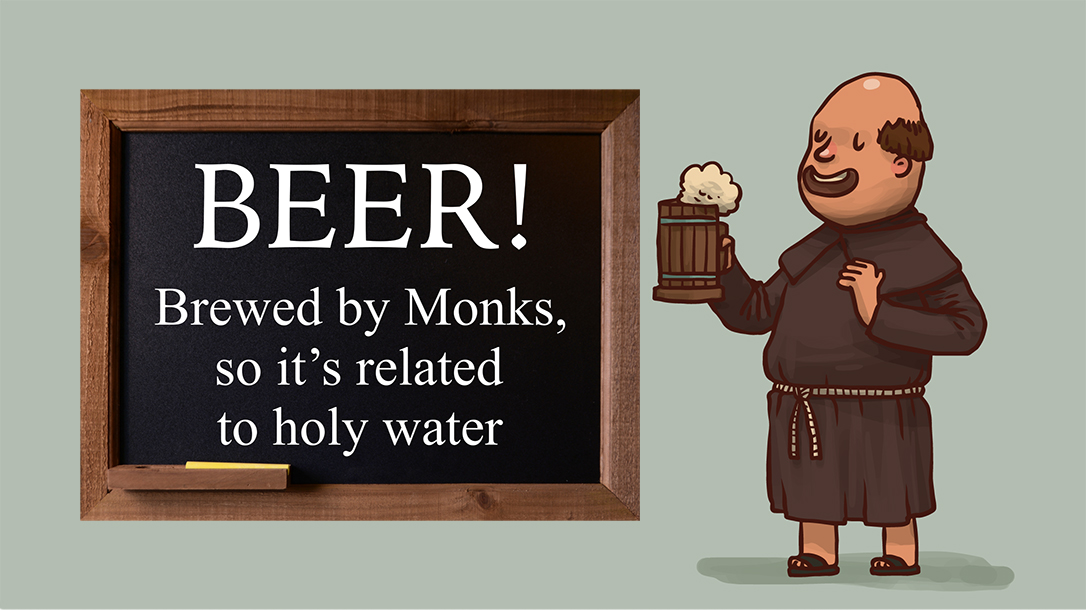 In the book of Matthew, the Bible tells us that a man cannot live on bread alone. Some German monks in the 17th Century apparently interpreted that passage as more of a suggestion than a commandment—because monk beer is a thing, and it’s a good thing.

Monk Beer For All!

Monk beer isn’t your daddy’s beer, although it could have been. It could even have been your granddaddy’s beer. And his daddy. And so on down the line, dating way back to the 1600s.

Most in the craft beer crowd know monk beer as “Trappist beer,” and it’s been brewing for over 400 years. It’s survived world wars, fascist dictatorships and scores of other terrible things that have happened across Europe in that time. Just ask Google.

The rules of these Catholic monasteries be self-sufficient and that the monks work with their hands. So the monks had to get entrepreneurial and began producing what they knew would sell.

There are generally four kinds of monk beer, with each denoting the strength of the brew: enkel (single), dubbel (double), tripel (triple) and quadrupel (take a guess). Some of those 17th Century monks brewed another kind of beer, one that was much stronger than the other. In order to get them through one of their toughest ordeals: Lent.

For the heathens and pagans not in the know, every year Christians of a certain cloth will physically atone for their sins over 40 days. This 40-day timeframe represents Christ’s journey into the desert where the devil tempted him for 40 days.

The practice varies by sect, but self-denial is generally universal in Lent practices. This is especially true for Catholic monks. And in the 17th Century, Lent was a much bigger deal than giving up chicken wings for six weeks.

According to German brewer Paulaner, the Cloister Neudeck ob der Au monks, were so strict during Lent, they weren’t allowed any food during the 40-day fast. Apparently allowed to drink however, so they did what anyone in that situation would do, make beer.

Obviously, the monks would not be able to live on water alone. And since they were in Munich, the drink they created was an “unusually strong” monk beer that provided the carbohydrates and nutrients grown men needed to make it through a long workday of prayer and drinking more beer. Not only that, it kept faith with their belief that “liquid bread wouldn’t break the fast.”

Whatever the monks didn’t drink acme shared with the poor in the region or else sold at markets for a rate much more discounted than other local breweries were selling. The local brewers complained that monk beer was wrecking the industry, and wrote a letter in 1634 to the authorities. Paulaner calls this letter its “birth certificate.”

The monk beer created for Lent known as “Sankt Vater” which roughly translates to “Holy Father Beer” is on sale again by Paulaner brewing. It is an 8% ABV “Salvator” beer, with a much stronger flavor and color than its other 8% beers.

Before the craft beer crowd jump on me, it’s important to note a few things. First, Paulaner isn’t brewed exclusively by monks anymore, and Paulaner wouldn’t be considered a Trappist beer, anyway. Its monks weren’t Trappist; they were Cisternian monks, which made Paulaner an abbey beer.

But there are still 14 Trappist monk beers and scores of abbey beers brewed by monks for monks (and for general consumption). These are either brewed in an abbey or under monks’ supervision. Also, the proceeds from the sale of these fine beers go toward the abbey and its charitable works. So, for charity’s sake, drink up!

How Often Should You Wash Your Sheets? Freshen Up, You Filthy Animal!

Washing sheets, now who doesn’t love one of the many great American pastimes besides cleaning their AR-15? I remember in

How to Plan a Family Road Trip: Without Wanting to Drive Off a Cliff

As a kid, family road trips were what I looked forward to the most every summer. Please keep in mind

Know Your Poisonous Berries: How to Identify Nature’s Cyanide Capsules

There is a romantic idea floating around about living off the land eating nuts and berries. The same folks who