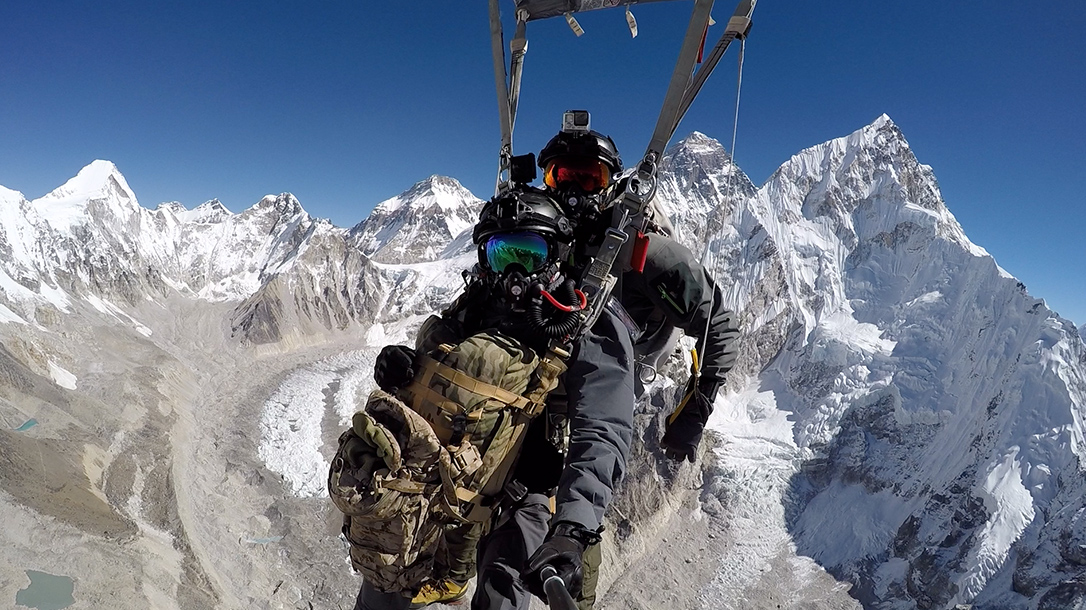 (Photo by CPS and Apache Productions)

Setting Military Freefall Records at Everest, the Top of the World

So what does it take to execute the most challenging Military Freefall (MFF) jumps in the most extreme environment imaginable? Only one place in the world could support such high-elevation parachute landings — the Everest region of the Himalayas. The first step was to assemble a tribe of adventurers with the expertise, background and great passion to take on such a challenge. There’s no one better to do this than Complete Parachute Solutions (CPS). CPS is the premier parachute manufacturing and training company for Military Freefall, along with Dillon Aero, MagPul Industries and TopOut Aero. These are all leading companies with outstanding reputations for excellence, as well a taste for epic adventure!

A Brief Background on the Military Freefall

CPS is the world’s leading provider of ram-air military parachuting equipment and military freefall training solutions. They have received multiple accolades for their parachute systems, including most reliable equipment, safest schoolhouse record and the most Military Freefall parachute jumps into combat! Dillon Aero bears the standard for manufacturing the sickest gun ever produced, the Dillon Mini Gun (M134D). MagPul Core has a reputation for highly sought-after training and top-level expertise in field craft. The expedition also relied on the Multipurpose Tactical Oxygen System (MTOS) from TopOut Aero. They were to assist with the oxygen deprivation during the rigorous and demanding alpine treks and high elevation parachute landings.

“Why jump in the Himalayas?” It started with Fred Williams, the President of CPS, and his drive for validating parachute equipment performance for wartime requirements. Fred is a former U.S. Navy Seal and the driving force behind the growth and innovation of MFF parachuting. Fred’s vision was to lead an expedition of 12 men into the extreme environment of the Himalayas to culminate a five-year quest to land a Military parachute above 20,000 feet. This mission would demonstrate the performance of their equipment, validate their training methodologies, and attempt to establish multiple world records!

Talk about stacking the team for success! All of these men offer an extensive amount of alpine and parachuting knowledge. More than half of the team members are U.S. military veterans from various special operations units with a surplus of experience as MFF jumpers. These professionals — combined with the best equipment and training in the world — meant we were sure to set some new records and have an epic time doing it!

To complement this strong team a detailed, yet flexible plan was required for training the boys and conducting the expedition. Fred, his “go-to” man Johnny Rogers, Vice President of CPS, and Cody Carrol expertly handled this massive effort.

The adventure began during the summer of 2016 when Fred trained Caylen Wojcik as a qualified parachutist. Caylen was selected to validate training methodologies, and Fred hoped Caylen would become one of the record holders by being the least-experienced jumper to successfully land at Syangboche (12,500 feet). Caylen achieved that goal and conducted a stand-up landing on his 51st jump in Syangboche.

Training continued into the fall, with the team assembling in Colorado to conduct a week of high-elevation landings at progressively higher locations. In addition to training landings, the team was tasked with evaluating the TP 460 Military Tandem main canopy, the latest addition to the CPS arsenal. The final landing was into the Lake County Airport in Leadville, which is the highest airfield in the U.S. at 9,927 feet.

The culmination of this training was low-speed, combat equipment and tandem exits from Chris Dillon’s helicopter. At CPS’s tactical training facility, the team completed their training and finalized plans. The training had not only prepared the men for the adventure, but also had helped to bring them closer as a team. For the men on this trip, it was not only a chance to validate their expertise, but also to gain an experience that would push them to the next level! We were on our way!

Link-up was conducted in Dubai. As a team, we traveled to the intensely populated and bustling city of Kathmandu to meet our host, Explore Himalaya Travel & Adventure. Most of us were anxious to begin and get to the Khumbu Valley! After gear prep and exploring the city, we flew to the Lukla airport. It was a pretty awesome landing for a bunch of aviation nuts like us! The country was indescribable, with the most amazing sights we will ever have the privilege of experiencing during our lifetimes.

We had a two-day hump to Namche in order to acclimatize, with our guides working to ensure that everyone remained healthy for the real mission. Believe me, altitude humbles everyone! We gained 3,000 feet in elevation during the second day of trekking to Namche. In Namche, final preparations for the first jumps at Syangboche Airfield began. This landing area was Caylen’s record jump as well as the proving grounds for all other jumpers to move up the mountain. All of the jumps went off beautifully with Caylen making his 51st and 52nd jumps. What a way to start the mission!

We were already off to a great start, and Fred and Ryan Jackson led the combat equipment jumps on the following day onto Ama Dablam, followed by Josh Seagrave and Jeff Schultz. Tom Noonan conducted a tandem with Ted Atkins and broke the record for highest tandem parachute landing! Not to be outdone, Marty Rhett and Hunter Williams with full combat equipment followed, setting the record for highest tandem landing with combat equipment. The final load was Major Cody Carrol of the U.S. Marine Corps Reserve. Cody jumped with a Multi-Mission Parachute System and full-mission ruck to successfully land at the Ama Dablam base camp (15,000 feet). Cody established the record for the highest parachute landing by a U.S. Marine!

After two days of jumping, Ted planned a calculated series of team movements. The goal was to acclimatize the landing zone team and jumpers for the next series of higher-elevation landings. All were mindful that we were about to land parachutes higher than most aircraft fly! All of the solo parachutists were jumping rucks loaded with operational gear. One of the objectives after a successful parachute landing would include a follow-on trek up the Kala Patthar plateau to demonstrate the effectiveness of MTOS supporting both jump and ground movement operations.

Gorak Shep, at 16,850 feet was the next target. The morning of the jump, our pilot Mauricio informed Fred the winds were strong and coming from an unusual direction. The weather was questionable and created an additional challenge to the confined landing zone. Leading from the front, Fred conducted a rapid risk assessment and briefed the team on the plan. He and Ryan would assess the conditions and provide directions to safely navigate into the landing zone. Everyone assisted them in gearing up with a quiet seriousness.

The team waited anxiously for the helicopter to return with news that Fred and Ryan landed safely. Then, with Fred’s direction on how to navigate the wind conditions, the next group took off for their shot at landing at 16,850 feet. Josh and Jeff executed with precision and landed on target! Marty and Hunter lifted next, their mission to set the world record for the highest tandem landing with combat equipment. The two made the trip to exit altitude at 22,000 feet and without hesitation, pushed off into the thin air. The canopy flight was “sporty,” but the two were able to conduct a dynamic landing on target! Nearing the end of an epic day, Tom and Ted set the record for highest tandem landing without equipment.

Following the record landings, our selected task force of four jumpers began the MTOS trek up the plateau. They moved with speed and passed other trekkers — it was a great show of the MTOS system! The day ended when we consolidated everyone at Pheriche to prepare for the final goal, Fred and Ryan landing on the West Col the next morning to set the world record for the highest parachute landings at 20,100 feet!

Dawn revealed winds that were way out of limits, however, and operations were cancelled for the day. We stayed in Pheriche for a couple more days, hoping for a window to jump, but the weather only got worse. It was extremely difficult for Fred to cancel the attempt and to begin the descent down the mountain. He did so with a promise to return and conquer the West Col.

As expected, the team members are now sharing stories of their exploits, honing their skills, and training others to prepare for their return to this mountain. You can follow all the adventures @completeparachutesolutions or at CPSWorld.com!

This article on the military freefall is from the summer 2017 issue of Skillset Magazine. Grab a subscription at OutdoorGroupStore.com. Also, be sure to check out our podcast Skillset Live!