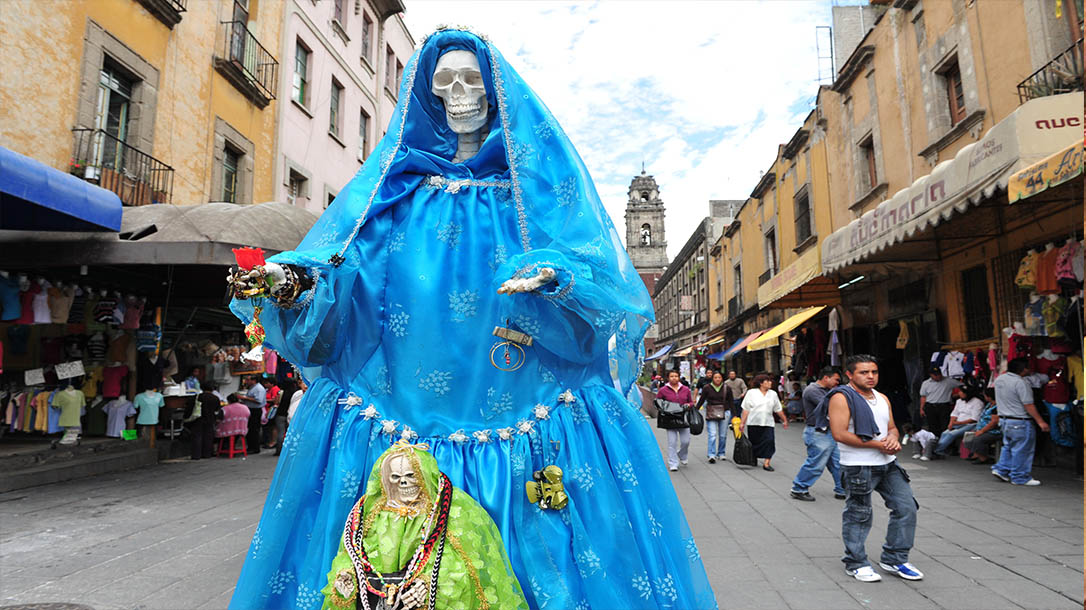 Mexican Drug Cartels: An Inside Look At A Religious Death Cult

The Mexican side of the 2,000-mile long U.S.-Mexico border is the single most important narcotics smuggling route in the world. As a result, the northern part of Mexico remains widely controlled by drug cartels. When Mexico declared war on the drug cartels, it saw some early successes, killing important cartel leaders.

But lucrative drug smuggling operations don’t just disappear when their leaders are killed. Then-President Felipe Calderon’s drug war had an unexpected side effect. Removing the drug cartel kingpins left a power vacuum, and violence between those jockeying to fill those vacuums exploded.

Rival gangs didn’t just fight the Mexican armies out to end the trade routes, they began killing each other for control of the drug cartels themselves. As more and more men fell to the violence, they began recruiting from local police forces and even the army in order to fill their ranks.

For both the innocent people as well as cartel members, one way to cope was to turn to religion. Except their new religion isn’t the Roman Catholicism that dominates traditional Mexican society. A new religion is springing up around the idea of death itself: “Santa Muerte,” or Holy Death.

Followers of the fast-growing new faith find comfort in leaving offerings to idols representing incarnations of the Grim Reaper. Money, cigarettes, alcohol, and anything else that might curry her favor are often found beneath her feet. Even the heads of fallen enemies have been left at Santa Muerte altars.

Like the Grim Reaper, Santa Muerte is the one who collects souls as they are cut from their mortal body. The offerings are meant to protect them on their journey to the afterlife. Of course hopefully they will add some more time to their stay on Earth.

Since December 2006, an estimated 60,000 Mexicans have died in the drug wars in northern Mexico alone. Hundreds of municipalities have since fallen under the direct control of drug cartels. For the soldiers of the cartels, Santa Muerte offers a much more lenient view of their work than Catholicism does.

According to the FBI, “the cult promotes greater levels of criminality than the more mainstream and older forms of Santa Muerte worship. Sometimes it can be so extreme that it condones morally corrupt behaviors – what many people would consider as resulting from an evil value system that rewards personal gain above all else, promoting the intentional pain and suffering of others, and, even, viewing killing as a pleasurable activity.”

The FBI goes on to say that Santa Muerte has evolved into a “spiritual insurgency,” outside of Christian beliefs, complete with a separate god, priests and priestesses, and unsanctioned saints. For Mexicans who live in poverty and do the work of the drug cartels, Santa Muerte offers a rationale for their actions. It provides them with a religious foundation for their earthly crimes.

While the cult is primarily found south of the border, it is slowly seeping into the southwestern United States. Law enforcement officials in those areas near the border are beginning to see window decals, tattoos, and other paraphernalia related to Santa Muerte in their drug-related arrests. Most strikingly, altars to Santa Muerte have been discovered in Tennessee, New Jersey, and as far north as Wisconsin.

What began as a means of comfort and protection among the poor and innocent in Mexico during uncertain times has found its way to becoming the foundation and justification for criminality and horrific acts of violence. It’s just the latest evolution of the decades-long war on drugs.