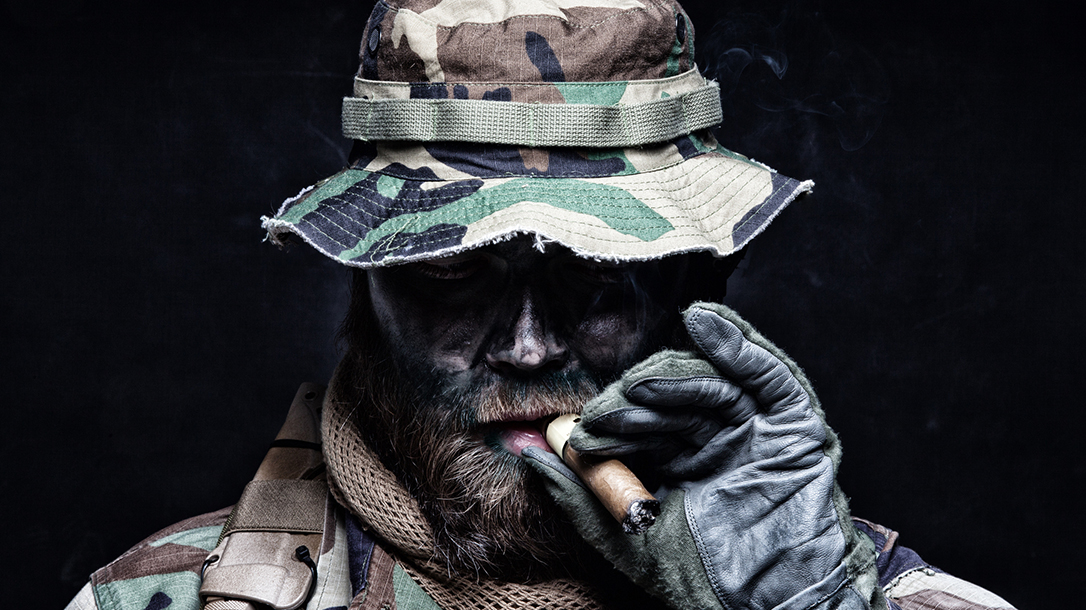 “Yo, ho, ho and a bottle of cognac on an APC! It’s a merc life for me!” Well, OK, maybe not quite like that. The golden age of the mercenary in Africa was from the 1960s into the 1970s. During this time, internal and external forces fought for dominance on the continent. What options did you have when you needed to fight, but lacked the manpower? You hired a gunfighter, of course. Being a gun for hire is perhaps the second-oldest profession known in the world.

The mercenary business in Africa during this time thrived, thanks to the great vacuum of continued chaos across the continent. From the Simba Rebellion in the Congo in the early- to mid-1960s, to Nigeria from around 1967 to 1970, to Angola in the mid-1970s, you could fill volumes detailing the battles and rebellions. War is a business, and business was booming with French, British, Italians, Belgians, Germans, Americans, South Africans, even Egyptian pilots in some cases, as well as others. They were all fighting for different countries, loyalties and organizations.

Leaders proclaimed independence in regions they wanted, often going for where the most wealth was. An example of this was the short-lived, oil-rich state of Biafra during the Nigerian Civil War, which lasted three years and cost more than two million civilian lives. Each time a breakaway country was declared, both sides would enlist fighters from other African countries or from other continents to come and wrest back control.

As with most conflicts and war, some mercenaries became legendary. Jean “Black Jack” Schramme, a Belgian mercenary, led a coup to take over the town of Bukavu in the Congo. Later, upon his return to Belgium, Schramme would be accused of murdering another Belgian while in the Congo. Schramme countered that the man was trying to destabilize the area and pit one merc against another and so on.

While awaiting trial in 1969, he received permission to fly to Brazil to buy a plantation. However, he never officially arrived. Rumors persist that he changed his name and lived out his years on the plantation. Of course, there are different versions of his story.

World War II veteran “Mad Mike” Hoare lived in South Africa when he met Moise Tshombe, who would later declare the independence of Katanga from the Congo and hire Hoare to help put down the communist-backed Simbas. “Mad Mike” even called his outfit the “Wild Geese.” Later, he would be the inspiration for Richard Burton’s character in the film by the same name and would also serve as technical advisor. Fredrick Forsyth, the English writer known for hits such as the book “Day of The Jackal,” was a journalist at the time covering the fighting in the Nigerian Civil War. He also wrote the mercenary war book “The Dogs of War” that later, as a film, would star Christopher Walken.

A History of Violence

But gore and bloodshed prevail as the cornerstones of war. The lore and fables in books and film often don’t mention the true level of violence. There are perhaps two exceptions in “The Wild Geese”—when Richard Harris’ character pleads to be shot rather than be captured alive and Kenneth Griffith’s character is hacked to death by Simba rebels in the bush. Even these examples never truly displayed the savage level of violence. The chance at fortune and glory could very well end up being a life of torture while rotting in a forgotten cell or ending as a corpse paraded along dirt roads.

Decades after this golden era, there would be another rise of guns for hire. After the Soviet Union fell, the lid once again came off the boiling pot that was Africa. This time, it would be Eeben Barlow’s Executive Outcomes, arguably the godfather to the modern PMC, doing what the United Nations couldn’t do—or wouldn’t do: Defeating rebel groups in battle, such as the UNITA rebels and RUF. But that is another merc story.

For even more cool history, be sure to check out our podcast Skillset Live!  Get in on the conversation on our social media pages or pick up a back issue at OutdoorGroupStore.com!