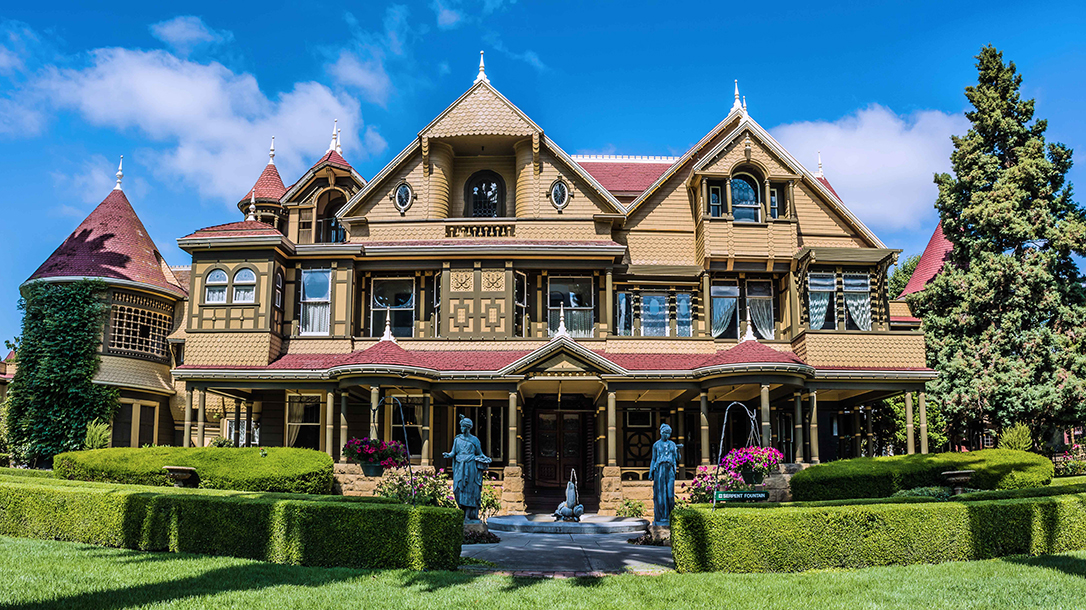 Haunted houses are usually avoided at all costs. They send chills down your spine, makes the hair on your neck stand up, and produce an overall eerie feeling that may stick with you for days.

However, this haunted house is different. It has hosted millions of curious guests overs its nearly one hundred years of open-to-the public tours and it shows no signs of letting up anytime soon.

For those new to the weirdly mysterious Winchester house, it is located in the heart of San Jose, California, and was constructed under the eccentric eye of Sarah Winchester, who was, at-the-time, the widow of William Winchester, the famous man behind the famous Winchester rifle(s).

However, Sarah wasn’t your normal owner who had a few suggestions for the builder, not by a long shot. Instead she was the twisted mind behind one of the most oddly constructed homes in the world that never reached completion during her lifetime. Perhaps it was her wonderous imagination that kept the build going, or possibly the ghosts that she believed needed to be appeased.

Either way the result was nothing less than mind-blowing, and the following bizarre facts behind the house make it even creepier, as well as all the more intriguing.

It’s hard to imagine that anyone had the money back in the early twentieth century to build a house with ten thousand windows, nearly one-thousand doors, around fifty fireplaces, six luxury kitchens, three elevators, and fifty-seven skylights. But Sarah Winchester did, and If you didn’t catch the name, she was the wife of William Winchester, the owner of the Winchester Repeating Arms Company. This company was the leader in rifle sales and the profits poured in. After William died, his widow, Sarah, was the recipient of the vast fortune and what did she do with it? She put it into her house’s construction.

Many large homes have construction delays when being built. Other homes that undergo remodeling have obstacles, too, that delay the completion of the project. But few, if any, other homes have a timetable of nearly thirty-eight years of construction,

and it was only stopped due to the owner’s (Sarah Winchester) death. Astonishingly enough, the construction ran from 1886 to 1922 and employed a crew that worked seven days a week, fifty-two weeks a year and worked both during the day and the night. If she didn’t fall victim to heart failure, it’s a sure bet the build would have continued.

It wasn’t only the fact that the build of the Winchester House went on for nearly four decades that amazed and perplexed individuals, it was also the manner of construction and design that occurred within the home. Unlike traditional homes, this monstrous oddity offered stairways that lead upward to nowhere, a skylight not in the roof, but rather the floor, and secret passages that lead from one end of the home to the other twisty and turning like a hidden labyrinth. Additionally, there were doors that, when opened, would have nothing but another wall blocking any path forward. By far the oddest addition was a doorway on the second floor that led to nowhere except about twenty feet downward to the ground below.

One may wonder just what caused Sarah Winchester to take on such an enormous building task as she did and the answer surprisingly lies in her fear of the supernatural, specifically ghosts. This transpired as she met with a medium who claimed to contact the spirit of her dead husband, William Winchester. He then told her in order to keep the ghosts (victims of the root of their fortune, the Winchester rifle) appeased and content, she would need to build a home for them, as well as herself, and to never stop building. The message was clear and direct; if she were to stop building, she would die, so naturally she continued until her own death halted the project.

Although Sarah was a recluse when it came to having friends, acquaintances, or neighbors, she was definitely not alone in the ever-growing Winchester House. She employed eighteen servants that maintained the interior, as well as another eighteen or so gardeners that managed the immense lawn, shrubbery and gardens found on her estate. All these individuals are in addition to the construction crew that added dozens of more people to the work force at the Winchester House. Other “advisors,” namely spirits “living in the house” were consulted daily by Sarah in the Seance Room to discuss the progress of the home’s unique design.

One mystery that has no answer is Sarah’s obsession of the number thirteen. For some people, the number is unlucky, for others it spells fortune and well-being. For Sarah, it was translated into the never-ending build of the house. She had the construction crew create numerous thirteen step stairways, thirteen pain windows, and thirteen paneled ceilings. Perhaps the superstitious number was attached to Sarah herself, for she created her own will in thirteen parts and signed it, you guessed it, thirteen times.

Although it’s easy to dismiss Sarah’s fear of the dead as paranoia or a breakdown of her sanity, the Winchester House today is a veritable “hot spot” of paranormal activity. Numerous tour guides have claimed to hear creepy footsteps and disembodied voices as they gave their tour throughout the house. Most guides agree that the majority of the ghostly activity is present on the third floor, which coincidentally was location of the servants quarters. They also say that that area is so secluded within the home that they cannot hear the other tours that are going on at the same time. This also adds to the creep-factor, especially if the name of the tour guide is whispered by a spirit during the tour.

A CRAZY OWNER, OR WAS SHE?

It would be extremely easy just to say Sarah Winchester was mentally ill, or simply crazy to go to the extremes that she did with the home, and it might be absolutely true. However, other theories include Sarah was trying to relive the feeling of joy that she and her husband had designing their previous home in New Haven, Connecticut, or that she was giving back and supporting the community by employing many people over many years. No one will truly know her reasons but speculating has endured for nearly one hundred years and still going strong today.

Tourist Traps are everywhere in the United States. However, the Winchester House is not one of them. In fact, this mansion is a great destination for anyone wanting to experience a combination of the bizarre, the amazing, and the paranormal, all wrapped up in one convenient package. The house is still owned by the family that purchased it way back in 1922 (Their identity is a mystery. Of course it is.) and they kindly allow regular tours of the home. The house acquired landmark status back in 1974, and it was truly earned.