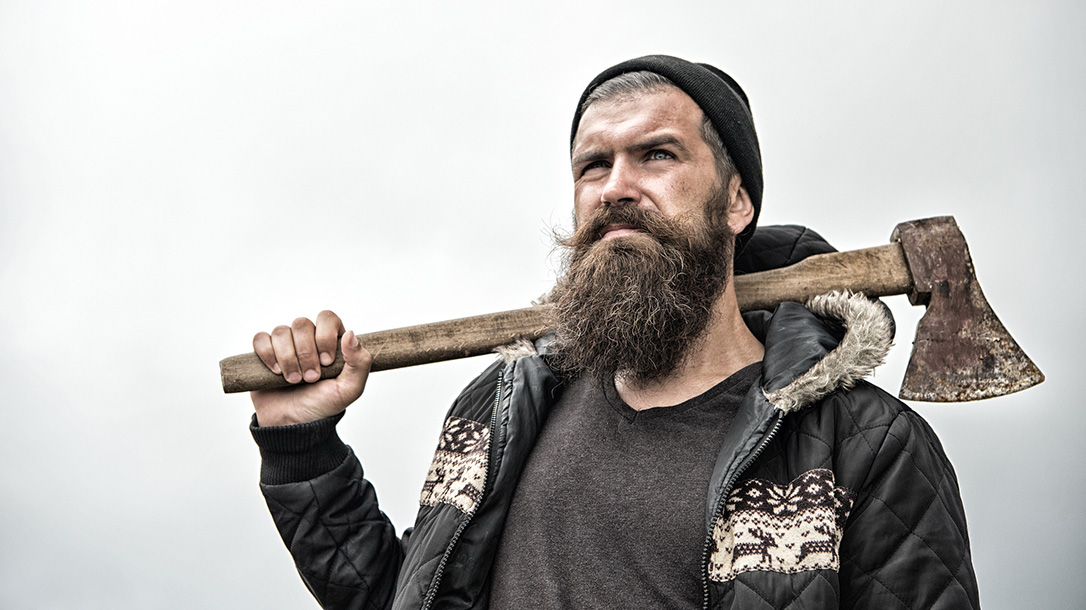 Lumberjack Living: Building the Country One Tree at a Time

The lumberjack opens his eyes wearily, body sore from the previous day’s 16 hours of labor. The air is crisp and thick, weighed down heavily by the early morning moisture of the forest. There is a stillness that he loves about this time of day. It’s just before the others have risen. It’s before the saws begin to feed their endless appetite of oak, ash, fir, and pine. He lifts the dark, gritty, scalding coffee to his lips. Then he mentally counts the days since he last saw his family. He silently laments how many more lay ahead of him before he can see his wife. Because the job is all there is. The job means security for his family. The job means he may one day own his own mill. But the job is never done.

Finishing his coffee, he pulls on his boots and reaches for his single-bitted axe. It fits in his hand perfectly, the handle worn and shaped by sweat, blood, and an incalculable number of swings. His calloused thumb passes gently over the edge, checking for nicks that can be quickly filed off. His mind begins to prepare for the day. He pushes all thoughts of family to the side, suspending actual time because there is only the job. He joins his crew in the back of the wagon pulled by the ancient gray draft horse. In an hour they’ll be far from camp, wrestling with their two-man saws, dancing with death in a ballet of wood chips, falling giants, and meager pay. This is his life and he would choose no other. He is a lumberjack.

The Life of the Lumberjack

These days, you’re more likely to see burly, bearded men debating the amount of citrusy hops in their favorite microbrew, holding their mugs with soft, unworked hands and dressed in pristine imported flannel shirts than a real lumberjack. Gone are the vast camps of adventurers, miscreants, wanderers, misfits, and day-laborers that sought a paycheck felling timber. Men that reshaped the face of this country with their sweat, unbreakable backs, and a desire to keep the lumber industry alive and well. As far as tough trades go, lumberjacks are near the top of the list.

In the 1800s up through the 1940s, from Washington State to Maine, Michigan to Louisiana, hordes of men would descend upon the endless forests. With little more than hand tools, they cleared thousands upon thousands of acres of land. They dropped trees of staggering size. They moved them to the intersecting network of rivers and tributaries, and floated them to their sawmill destinations. At no part of that process did they not risk their lives, often for pennies a day, even by today’s standards.

Across the country, ancient vegetation like the giant Sequoias of California succumbed to the endless barrage of saws often wielded by large teams of men. However, known for cutting and shipping more timber than any place on the planet, Bangor, Maine, was the epicenter of the logging world. As the 19th century wore on and American expansionism moved ever westward, it was accompanied by the nomadic lifestyle of the lumberjack.

Long before the mechanized efficiency of heavy equipment, loggers would make use of horse or cattle drawn grease-laden skidders to transport the timber to a nearby river. Standing amidst the floating giants, men would leap from log to log. They pushed, pulled, and relieved the river of jams using tools like a spear-and-hook-tipped pole called a peavey. These were the “log drivers” responsible for getting the wood to a downstream mill.

Originally referenced as loggers, the term “lumberjack” was born in Canada. It typically refers to the old-school badasses that didn’t have the luxuries of modern equipment. They traveled from camp to camp, job to job in order to make a living. Some names for specific jobs in the logging industry contained just as much character as the men that occupied them. High climbers, river rats, catty-man, chasers, choker setters, faller, bucker, and hook tenders were but a few of the jobs available if you had the stones.

But put a bunch of hard working men in the same area, give them a little Devil Juice, and you know you’re going to get something dangerously fun. Many of the men would engage in competitions to see who was the best in the camp; this is a tradition that can be seen to this day at many modern county fairs or even on ESPN. Two-man saw competitions, chainsaw speed cutting, axe throwing, log rolling, and climbing are but a few challenges that have all experienced revivals in the quest for cash and notoriety.

Maybe one of the most legendary lumberjacks in history was a Maine native named Albert Lewis “Jigger” Johnson. In fact, remember those craft-beer swilling phonies mentioned earlier in this article? The first paragraph on Jigger’s Wikipedia page is enough to reduce them to crumbling messes:

“Albert Lewis Johnson (1871 – 1935), better known as Jigger Johnson, also Wildcat Johnson, Jigger Jones, or simply The Jigger, was a legendary logging foreman, trapper, and fire warden for the U.S. Forest Service who was known throughout the American East for his many off-the-job exploits, such as catching bobcats alive barehanded, and drunken brawls.”

This is our kind of guy.

Hundreds of tales arose about Jigger’s exploits. Some stories were based in fact considering he was one of the most respected foremen on logging jobs in the East. However, there were many more stories about his ferocious nature when wronged (or drunk). While searching for some employees that left camp without permission, Johnson stormed into a local pub. He then grabbed a peavey and started swinging at any man that stood in his way. The pub’s massive Canadian bouncer tried to stop Johnson, but was no match. Jigger tossed him across the room and placed him on a hot stove. Then, after he had warmed up, Johnson hit him with a kerosene lamp, setting him ablaze. Needless to say, the rogue employees went back to the job.

Jigger Johnson was an iconic representative of the lumberjack culture of the day: Work hard, treat people fairly, and stay until the job is done. No exceptions.

Why the Lumberjack Is an American Cornerstone

Today, logging is still a cornerstone of development in this country. There will always be a need for clearing land. However, jobs that once needed large crews of men now often only require a handful of skilled people running dozers, feller bunchers, and diesel powered hauling equipment. Armed with huge chainsaws that would make video game heroes blush, there is still a vibrant community of men (and of course some women) with forearms like steel springs, weathered skin, and that thousand-yard stare known only by those that have lived a long hard life.

It’s doubtful the world will see another set of men like the lumberjacks of the 19th century; but this country wouldn’t exist without them. Here’s to all the fallers, buckers, and river rats that helped to literally build this country with their bare hands.