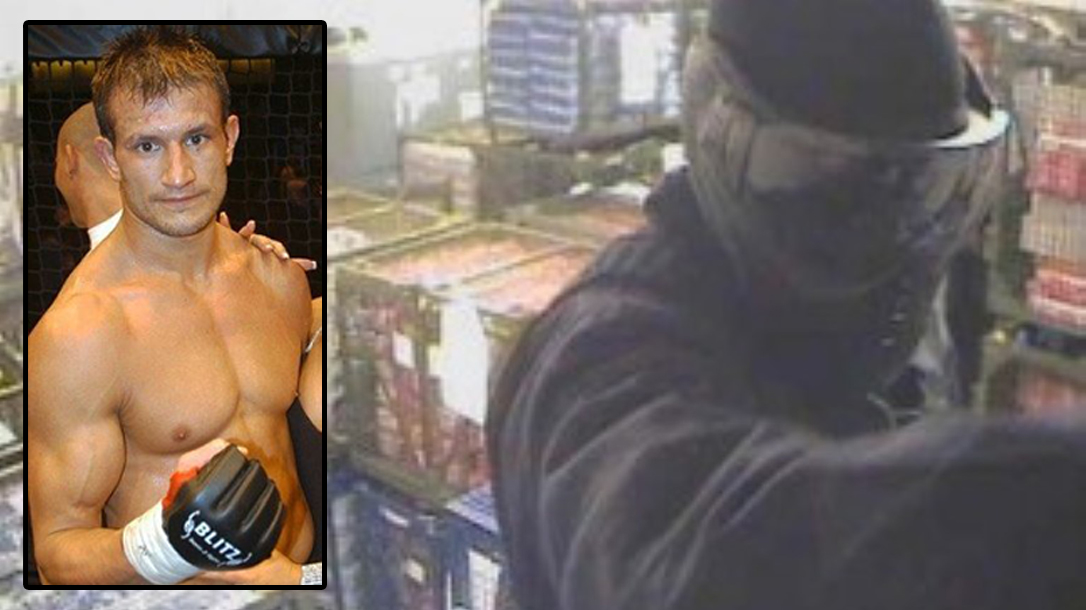 The biggest bank heist in British history took place in 2006 at the Securitas Depot in Tonbridge, Kent, U.K. The robbery was flawlessly planned and executed by a small-time criminal and former UFC fighter “Lightning” Lee Murray. The Securitas robbery initially had all of the hallmarks of a professional job. Unfortunately for the crew, as the days passed, mistakes in their planning began to emerge, and the police began to close in on Murray and his accomplices.

Lee Murray Is The Name

Securitas Depot manager Colin Dixon was commuting home after a long day at work. On the outskirts of Kent, he was pulled over by what was ostensibly an unmarked police car. Dixon was handcuffed, placed in a vehicle and driven to another location and placed into a plain white van and taken to a farmhouse. At one point along the way, Dixon tried to adjust the handcuffs. If he was unsure of the danger he was in, it became clear when one of the men pointed a handgun at him and said, “We’re not f—— about. This is a 9mm.”

The situation got worse when his wife and 8-year-old son were brought to the same farmhouse. Dixon was told in no uncertain terms that failure to comply would put him and his family in danger. The heavily armed men wore balaclavas to hide their identities. Without these facial coverings, the alleged leader of the group, Lee Murray, would have been easily recognized.

Lee Brahim Murray-Lamrani was born in London in 1977. The son of a British mother and a Moroccan father, he was a skinny street kid with ears that stuck out, making him look almost comical. He grew up in the Barnfield Projects, a gritty area in southeast London. Bullies in the area, however, learned early that he was not the one to pick on. Before ever entering into the world of cage fighting, Lee Murray was a veteran of over 100 street fights. With fast hands and an understanding of shifting his weight to deliver fast, effective punches, Lee decided to focus on cage fighting, but he would need training.

Murray trained for a stint at Peacock Gym, owned by the notorious Bowers brothers. The gym also conveniently doubled as a space for training and planning robberies. When the brothers were short on money, they fell back on an old method of getting the rent.

In 2004, wearing fake uniforms, the brothers set out to rob Gatwick Airport. The Brinks Uniforms were so good, a British Airways employee helped the brothers load the bags. Unfortunately for the brothers, their office was bugged and they were imprisoned for “conspiracy to steal.” Lee was not implicated in this robbery, but many believe the scheme itself inspired the Securitas robbery.

Evolving As A Fighter

After many successes in smaller cage-fighting promotions, Murray recognized that grappling was not his strong suit. In 2000, he made his way to Bettendorf, Iowa, to train under the legendary fighter and trainer Pat Miletich.

In 2004, Murray made his UFC debut. He defeated Jorge Rivera via submission in the first round. A star was born, but it wouldn’t last long. Visa issues prevented Murray from travelling to the U.S. and thus relegated him to fighting in smaller promotions in the U.K., but a Visa would soon be the least of his problems.

A year and a half after his first-round victory, Lee Murray was stabbed multiple times in a fight outside a nightclub. Murray died that night, but he was revived by hospital staff. He lost 20 pounds during the recovery and was unable to train. Murray’s dreams of UFC stardom were dashed.

At 1:00 a.m. on February 2006, the robbers, with the Dixon family in tow, made their way to the Securitas Depot. Dixon and a robber posing as a police officer entered the building and were allowed into the control room.

The robber pulled his gun on the control room employee and Dixon opened the main gate, letting the rest of the robbers enter the facility. They then rounded up the employees and tied them up. Next, the crew loaded their van with 53 million pounds from the cash vault. One member of the masked crew was picked up on CCTV checking a digital stopwatch he wore around his neck.

Before the crew made their getaway, they locked the employees and the Dixon family in cages. The captives were so fearful that they waited 31 minutes before activating the alarm. By that point, however, the robbers were long gone.

Initially, this heist was called the crime of the century, but there was just one problem. While their actions in the depot were textbook, there were issues with the post-robbery planning. One member of the crew continued to use the cellphone he had at the robbery. Also, a public tip led police to a van that was used in the crime. It still contained 1.3 million pounds, guns, wigs and body armor. The robbers had underestimated the bulk of that much money.

As members of the 14-man crew were getting picked off one by one by police, Murray and a fellow robber, Paul Allen, fled to Morocco. There, they bought villas and spent lavishly until Moroccan authorities caught up with them in June 2006. Murray, half- Moroccan, was given a 25-year sentence to be served in Morocco; Paul Allen was extradited to the U.K. where he was given an 18-year-sentence and ordered to pay back 1.23 million pounds.

This heist has gone down as the biggest cash haul in U.K. history, but a successful escape for the perpetrators was not to be. One of the most exciting fighters to watch in the cage will spend his best years locked away in a North African prison cell. The man about which UFC President Dana White once said, “He’s a scary son of a bitch, and I don’t mean fighter-wise” did indeed live up to that reputation.