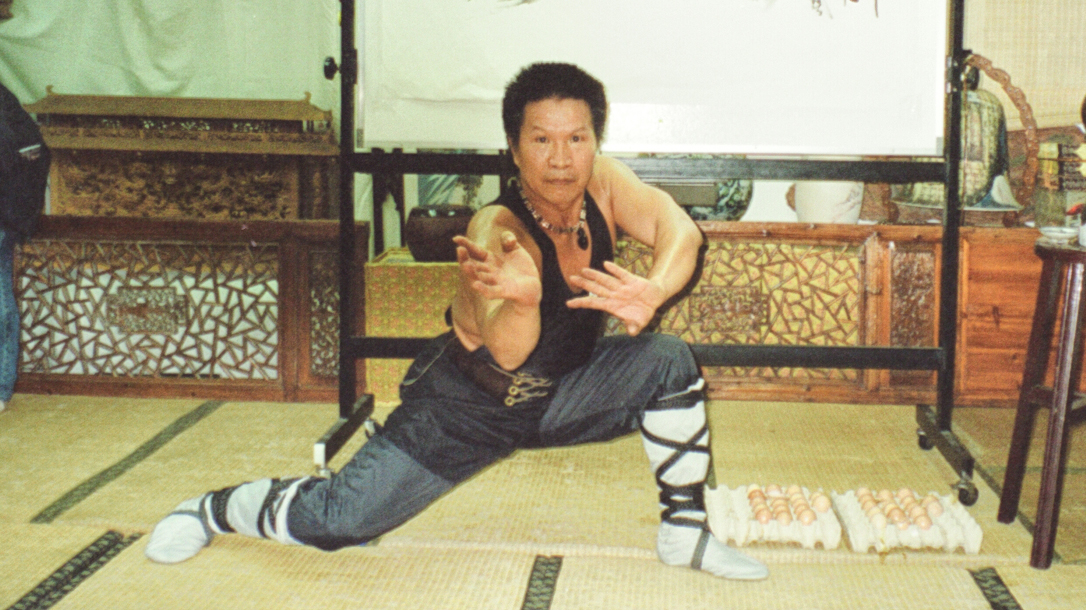 (Photo by Courtesy of Master Tu)

Iron Crotch: The Kung Fu Master Who Can Pull a Truck With His Privates

How do you get the nickname “Iron Crotch”? Well, Tu Jin-Sheng can pull a truck tied to his cock and balls. That is certainly not all there is to the man—far from it. Master Tu, as he is known to his friends and students, is a multifaceted, multitalented man. He has a laundry list of skills, hobbies, and interests at which he excels. He is a martial arts teacher and a painter. He’s also a musician who can give virtuoso performances on the Chinese stringed harp.

Master Tu teaches yoga and Chinese medicine. He can also hold forth on any number of intellectual subjects and topics of the day. He designs his own clothes and his sartorial tastes would seem to indicate a lifelong love of ’70s Blaxploitation films. And although that last part is only conjecture, he undeniably sports a hell of a lot of badass leather ensembles that would look right at home on the shoulders of Super Fly or Shaft.

But, just to be clear, Tu Jin-Sheng can pull a truck tied to his cock and balls. It’s for that insane bit of kung fu badassery that he has become world famous and has earned the nickname “The Iron Crotch.”

The Legend of Iron Crotch

According to Master Tu, it only makes sense to train the penis and testicles to perform awesome acts of kung fu mightiness. He states: “We train our fists, feet and shins to break boards and bricks so that we can deliver devastating strikes! We train our muscles to be strong, and we do cardiovascular exercise for endurance, power and, of course, good health! Why not train the reproductive organs as well? Why should the most important part of a man’s anatomy remain soft and unconditioned?”

The self-defense benefits of becoming immune to a kick to the balls are fairly obvious. Master Tu often gives demonstrations in which he calmly explains Iron Crotch practice and theory; all that while a volunteer repeatedly kicks him in the ’nads as hard as they can. However, the sexual benefits of Iron Crotch qigong training are far more valuable to a man’s everyday life.

“Sometime in his 30s, a man reaches a sexual peak, after which his hormone production decreases and his reproductive organs start to shrink. After 40, the ‘equipment’ really starts to shrink, a man’s general health declines, and he gets slower,” Master Tu says. “Qigong kung fu masters realized this and developed a method to prolong the peak of the reproductive period that also keeps the mind sharp, so you can keep learning new things. So, with Iron Crotch training, you can increase your penis power and brain power together!”

Naturally, one must wonder how this works. How does one train to develop a set of wedding tackle that will damn near deflect bullets? Well, much like any type of exercise, first seek the advice of a physician before starting any new strenuous activity … ESPECIALLY WHEN IT INVOLVES YOUR PENIS! Secondly, start slow and preferably under the tutelage of a skilled, experienced and knowledgeable professional … ESPECIALLY WHEN IT INVOLVES YOUR PENIS!

When you are ready, Master Tu will be happy to sell you one of his instructional videos, books, etc. Seriously, just go to MasterTu.com. But for now, here is a little taste (ugh, sorry) to satisfy your curiosity.

Iron Crotch qigong training generally involves a combination of meditation, focused breathing, Chinese herbal concoctions, and direct stimulation of the penis and testicles. This stimulation begins with light self-massage, which actually sounds like fun! It then proceeds to “pummeling,” which is the slapping around of one’s junk with controlled but increasing force; this sounds infinitely less fun.

Ultimately, Iron Crotch qigong adepts tie a soft piece of fabric in a figure-eight pattern around the old custard cannon and attach the other end to a metal T-bar. They use it to squat and lift steel plates like bodybuilders do when deadlifting at the gym. I’m not kidding. Master Tu and his students regularly give demonstrations of lifting 200-, 300- and even 400-pound stacks of plates that most guys at Gold’s Gym would struggle to press off their chests, much less pick up with their nuts.

Don’t believe us? Take a look at the accompanying pictures. Those are real. And lest you think that there is some sort of sleight-of-hand (or “sleight-of-something”) trickery involved, rest assured that this photographer got a WAYYY closer look at the whole “knotted-twig-and-two-prunes” arrangement than he wanted to. But the Iron Crotch practitioners insisted, and I didn’t want to be rude.

So, how does a student of Iron Crotch qigong progress from lifting weights with his one-eyed wonder worm to towing trucks with his Action Jackson? Pure genius and showmanship, apparently. The simple truth that Tu Jin-Sheng can pull a truck tied to his dick has made him the most famous qigong kung fu master in the world. In fact, he is even more widely known than that “other” Iron Crotch master featured in Matthew Polly’s best-selling martial arts autobiography, American Shaolin; the perfectly named Master Dong. No, seriously. Look it up. Master Dong. We’re not even kidding.

When last we spoke, Master Tu was working on getting permission from Taiwanese aviation officials for something big. What could he be doing now? Well, he wants to see if they’ll allow him and two of his top students to set a new world record by pulling a passenger jet down a runway tied to—you guessed it—their mighty Iron Crotches. We and the rest of the world wait in eager anticipation to see these titans of testicular fortitude show their stuff, so to speak. In a world fraught with ever-increasing feminization, it is nice to see that a swinging dick and a set of solid brass balls can still allow a man to move mountains … or, you know, at least move a truck. And maybe a big plane, if some of his buddies pitch in.