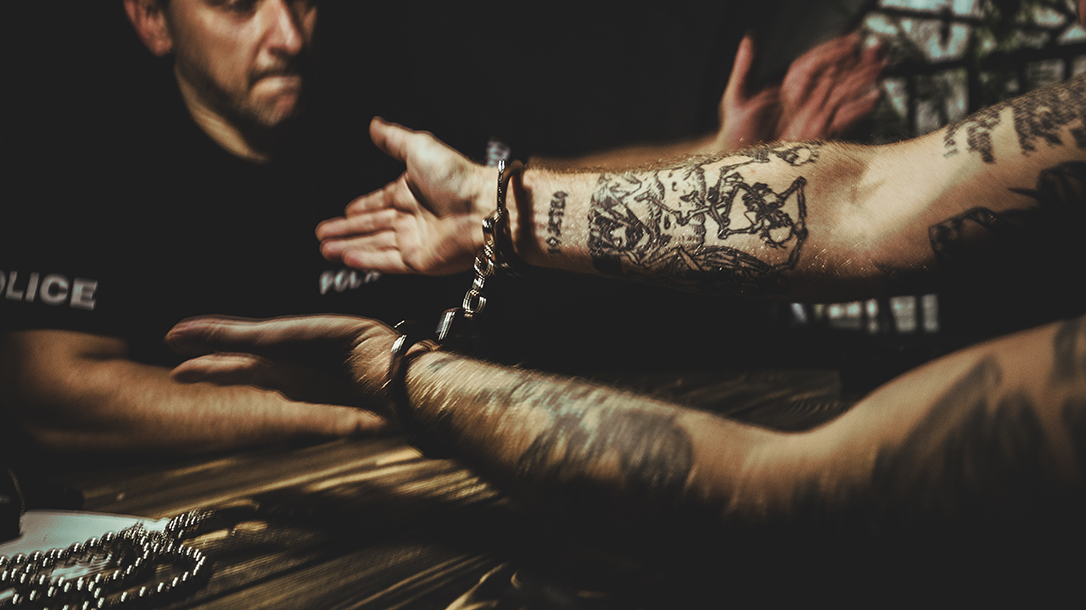 Inside Look At Jailhouse Tattoos: Slingin’ Ink In The Clink

The needle pierces the skin, scratching out a design that begins to take shape. The felon’s skilled hands deftly wield the makeshift tattoo gun. After dipping the guitar-string needle into the inkwell, a skull design starts to appear on his fellow inmate’s forearm. The inkwell is a cleaned-up toothpaste cap filled with ink made from ash and soot. Footsteps approach as the prison guard makes his rounds. If caught, both inmates could end up in solitary confinement. The artist’s tattoo gun is made from a beard trimmer, and the shaver is quickly reattached to hide the contraband from the suspicious guard. After he passes, the tattooing begins anew, and so goes the process of getting a jailhouse tattoo.

Notorious jailhouse tattoos, like the teardrop, which can mean murder, revenge or the loss of a loved one, can also give way to more heartfelt tattoos, like wedding bands or a girlfriend’s name. They can also tell the story of an inmate’s life. Likewise, prison skin art can show gang affiliations (for example, the Aryan Brotherhood, the Mexican Mafia and MS-13). Inmates get tattoos to help them to pass the time, to tell their stories, to show affiliations or just because it’s against the rules and they want to buck the system. Successful tattoo artists have to be not only good at their craft, but they must also be ingenious in the ways they procure their supplies and build their tools. If they can do it, though, there is real money to be made in prison, and this can ensure that they at least eat well from the commissary.

As noted above, prison tattoo artists need to be crafty. They have to build their tattoo guns out of available materials, and they often create the ink to go with these themselves. Many times, an inmate will take apart CD players or beard trimmers to get to the tiny motors that are used to drive the needles up and down. The needles themselves can be built in a variety of ways. A guitar string held over an open flame until it snaps can yield a needle with a fine point to handle detailed work. The springs from pens can also be flattened into usable needles.

These needles are then attached to the bodies of ink pens or pencils, so the artists can draw with them. They are also wrapped in string right up to almost the end of the needle. This absorbs some of the ink and prevents the artist from constantly having to return to the inkwell. Paperclips melted to the frame of the plastic motors and pen casings create a stable platform to attach the motor and necessary battery to the tattoo gun. A well-made tattoo gun can sell for upward of $50 in today’s prisons.

Once the gun has been procured, a good supply of ink is next on the list. If inmate artists are lucky, they can have family members provide them with colorful India ink from arts and crafts stores. This makes for a higher quality tattoo, but without it, the artists have to make ink themselves. There are myriad ways to accomplish this, but one of the most common is to burn baby oil and collect the soot.

The Meanings Behind The Ink

A cotton ball can be saturated with baby oil and burned in a metal can. Another flat piece of metal can be placed over the smoky flame as a soot collector. This soot is scraped off the metal and collected as black powder. It takes a lot of powder to create enough ink, and the baby oil may need to be burned multiple times to accomplish this. Once done, the black powder can be placed into a clean toothpaste cap or other plastic cap to serve as the inkwell. Finally, a drop of water or baby oil is mixed with the soot to create the ink. Now, the tattooing may begin.

Jailhouse tattoos, like any tattoo, have personal meanings for those who get them. They can create an image, tell a story, keep cherished memories close or serve to rage against the machine. They all have value, and they all have purpose. Jailhouse tattoos, in their endless variety, can represent a mark of shame or a badge of courage. Nevertheless, as long as there are inmates willing to wear them, there will always be clever artists who are willing to create these fascinating and often brilliant works of art under conditions that are perpetually far from ideal.