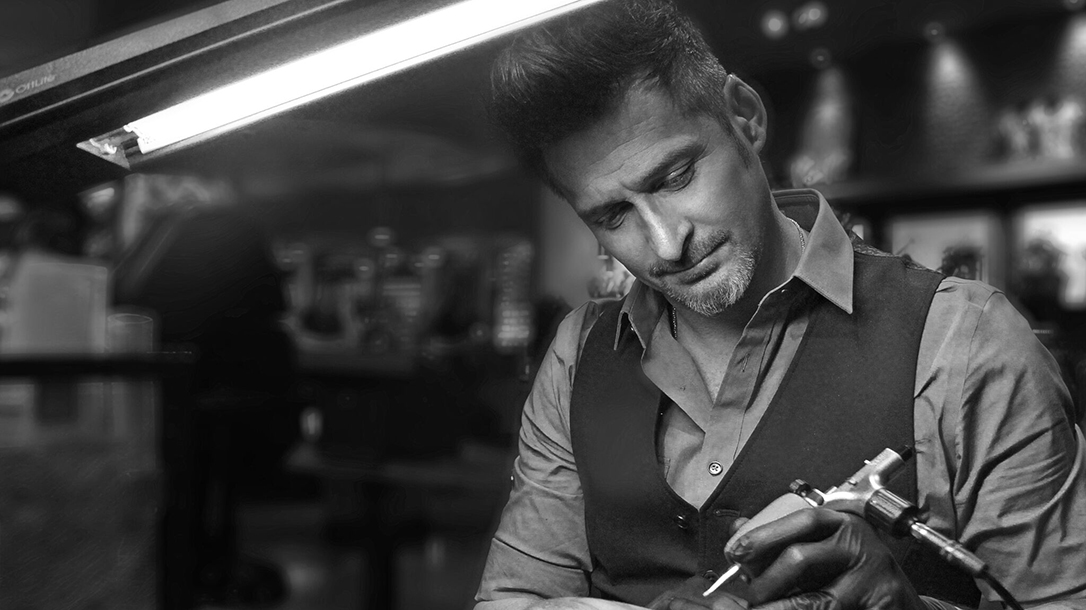 We all get tattoos for different reasons. Maybe it’s after a crazy night of drinking or to celebrate graduating from boot camp. As I look in the mirror at my 22 badges of honor, each one brings a devilish smirk to my face. The tribal art on my arm brings me back to 1993—remember when that was cool? The Social D dancing skeleton on my arm takes me back even further. All my ink has a story, from Iraq to Tijuana. Funny, the one thing they all have in common is that they were done in shitty tattoo parlors or on the well-deck of a navy ship — well, except for one. I had one tattoo done in the most magnificent parlor I’ve ever seen by a bona fide Ink Master … an Ink Master named Joey Hamilton.

The minute I walked into Revolt Tattoos in Las Vegas, I knew I was in for something good. The shop was modern and clean, with a huge flat screen television broadcasting “The Fast and the Furious.” I might not have been impressed by Vin Diesel, but seeing the season-three champion of one of my favorite television shows had me on the edge of my seat.

Joey Hamilton is a veteran and one of us. By “us,” I mean the type that works hard to get what he wants in life. Joey grew up in small town Woodward, Ok., and played American Legion baseball. He served his country in the United States Air Force for over a decade and also turned his skillset into a successful career.

When I told Joey I wanted the Misfit’s “Crimson Ghost” on my left hand, he just smiled and said, “Let’s get started.” I sat in the chair across from Walter “Sausage” Frank, another “Ink Master” alumnus and fan favorite. (Sausage’s competition was fierce for season four, and they robbed him of the title — binge watch the old episodes and decide for yourself.) Surrounded by all this talent, I started running my mouth. First, I had to ask about his military service.

Jason Swarr: I read you were a weapons guy in the Air Force. Is that right?

Joey Hamilton: You bet. I was in the Air Force and I worked on launch rail systems for fast movers. After a tour in Okinawa, I went to Herbert Field, Florida. It’s fair to say I got pretty lucky where I was stationed.

You could have been stuck in like Nebraska, or some missile silo in Wyoming! Did you do one enlistment or re-up?

Joey: I actually re-upped. It was right when Desert Storm had kicked off. I had landed in Herbert Field and volunteered to get trained on their weapons systems so I could deploy. It’s kind of crazy because I always look back and think, “Man, was that really a smart thing to do?” I was stuck there (in Kuwait) for nine months before the shit really started — just waiting. I’m glad I did it. It definitely is a life experience that you can always look back on.

When people complain about stuff, you’re just like, “Man …” (thinking back to when we first got to “Ink Master” and hearing the other contestants complaining). Three days in, somebody’s fucking crying and I’m thinking, “We have a place to sleep, and they’re feeding us, and you’re tattooing. Why are you crying?”

The Move to Tattooing

How long did you stay in?

Joey Hamilton: I hit my 10-year mark in the Air Force and I was like, “What am I going to do when I get out?” There was an ammo guy that was tattooing full time name Rodney. Back then, it was like the blind leading the blind. He’d only been tattooing six months. He got a job and was teaching me on the side. It’s crazy to think that this guy who was just learning himself was teaching me how to tattoo. I remember doing my first tattoo in his kitchen while he was drinking a beer and doing a tattoo on the couch in his front room!

So how do you go from tattooing in Rodney’s kitchen to being ‘Ink Master’?

Joey: I will say that the military definitely helped me out because a lot of people that are in my career field right now aren’t goal oriented. When I got out of the Air Force my goals were to own my own shop, become a good tattoo artist, and to earn a reputation in in Florida. I did it all within five years.

That seems quick — is that quick?

Joey: It’s pretty quick. I went to work, kept my head down, and did my job. I worked hard.

So, “Ink Master,” did the show recruit you or did you apply? How was that process?

Joey: I wasn’t going to go apply but then Sausage and our friend Chris Garcia were like, “Hey, let’s all three go,” because we considered ourselves the “A-team” at our last shop. We just all went together. During the interview you get four minutes to impress somebody enough in the hopes you get a second interview.

The Scoop on ‘Ink Master’

Season three of ‘Ink Master’had so much talent. Tatu Baby, Jime Litwalk, Kyle Dunbar … so I gotta ask about the drama, man. That show has the most fucking drama I’ve ever seen besides “The Real Housewives of Beverly Hills,” or whatever.

Do the producers tell you guys to go in the back room and talk shit?

Joey Hamilton: (laughing) Sometimes they get a little creative on how they edit. I was sitting there talking with Jason one night. He said, “Give the guy a win and it goes to his head,” and I said, “I’ve got two wins.” They cut up the whole conversation … he even had a different shirt on! When Tatu Baby and Josh were going at it and he called her a bitch … that was real. She literally blew her top. Filming another scene with just the three of us she wouldn’t look at him.

Joey: About every three days is a new episode. You’re keeping busy doing the reality part of the show where you have to sit around and talk. You’re doing the flash challenges, the critiques, the actual tattoo, and the drama in the house.  Every day is literally jam packed.

Would you return for a tournament of champions?

Joey: I would in a second. Yeah, and for the record, I think Sausage should’ve won his season. (Sausage glances over from his station with an approving smirk.)

As the interview ends, my hand tattoo looks badass. I’m daydreaming about how much better my sleeves would’ve looked if just ONE of my tattoo artists on ship had the talent to be an “Ink Master.”

Check out our podcast with Joey Hamilton, Skillset Live, episode 26!