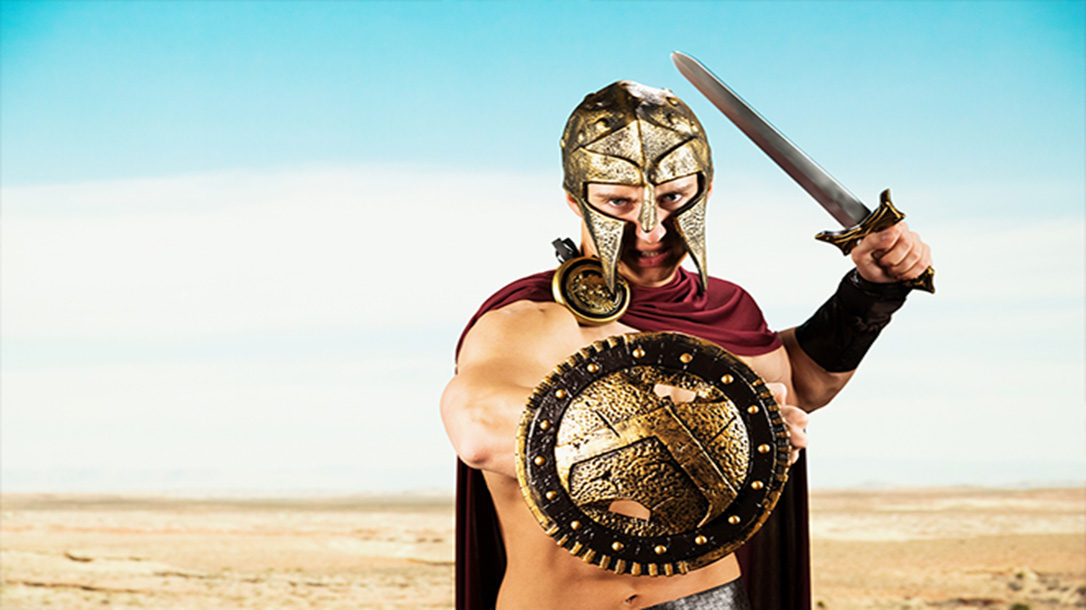 The Spartans were legendary warriors. Their name alone creates images within one’s mind of a brutal, never-give-up soldier that was feared on the battlefield, no matter the odds stacked against him. Well, now it’s time to take both their philosophy of fighting and some of their physical feats and apply them to your training sessions and competitions to transform you into an unrelenting warrior of the modern day. Get ready, everyone, its time to train like a Spartan!

Starting training early can be interpreted two ways, and both are equally important. First, like the Spartans, if a child or teen has an intense desire or engrained interest in a sport, their infusion into that sport should occur early in life. This will allow them to practice and perfect techniques and condition their bodies solely for that one physical exercise. Training of Spartan boys started when they were only seven years old.

At that age, they were handed over to the Spartan State, organized into groups that lived together, trained together daily, and studied the various aspects of warfare and one-on-one fighting. A second way of interpreting the idea of training as early as possible is that if you have a predetermined date for an event, such as a race or weightlifting competition, starting yesterday is too late. Once the event is set, your clock begins to tick away, so jump into the training immediately.

Live A Simple Life, When Training

During their intense training sessions, the Spartan youth (of course, only males) lived a simple life. This included going barefoot (more on this later), and wearing simple clothing which was worn year-round. They also slept on beds made from plant material pulled from the ground with their own bare hands.

Now, for your training sessions, you don’t need to go to such extremes. However, simplifying your life allows you to focus more and resist distractions or temptations from possibly engaging outside sources. Put into simpler terms, eat, work, train, sleep, and repeat. Nightlife activities and alcoholic beverages can dehydrate you and leave you feeling not yourself the following day. Even complications with romantic relationships add stress to your life and pull you away from your regimented and customary practices.

This won’t last forever, but during training, the fewer distractions, the better, and the rewards, in the end, will be well worth the sacrifice.

The ancient Spartans and modern-day doctors would surely be at odds with the idea that pain and positive results go hand in hand. During your training, you won’t endure what the youthful Spartans had to deal with, which would be borderline abuse, but you can take the underlying principles of pain and adapt them to your everyday routine. The Spartan boys often went barefoot to condition the bottoms of their feet.

The skin, over time, would become quite challenging and even somewhat puncture-resistant to thorns, twigs, and other natural sharp objects. At first, there was pain with every step across rough terrain, but over time, the pain disappeared. Additionally, and as mentioned earlier, a Spartan’s clothing wouldn’t change with the changing weather conditions. When it was blistery cold, they had to endure. When the sun was scorching, again, they had to endure. Their bodies became conditioned, so outside circumstances hindering others weren’t a factor for the Spartans.

This can be translated into modern-day training, also. If conditions outside are not optimal, that is precisely the time to go out. For example, if you’re a runner, you need to run in windy, rainy, cold, and even sun-blasting, hot-and-humid conditions so your body (and your mindset) won’t be affected during race day comes. Furthermore, training time should also be pushed longer and more intensely with each practice. Instead of cutting it short, you should push harder to further condition your body.

Think Outside The Box

Although fighting with ferocity on the battlefield was the Spartan soldiers’ claim to fame, the Spartans practiced skills other than pure fighting. Running was a staple in their training, which built endurance, stamina, and the ability to keep pain in check.

Additionally, they wrestled regularly and not using light contact, which would simulate true battlefield conditions if they found themselves without their deadly handheld weapons. They also played a severely brutal version of King of the Mountain.

Now, for your personal training regimen, you don’t have to play rough like the Spartans, but you should learn from their example of diversifying your training. To truly train like a Spartan, you will have to break away from the weights and cardio and add more unorthodox options to your workout. These could include yoga, which enhances flexibility and strength to seldom used muscles.

Obstacle courses improve balance, endurance, and stress while under physical pressure, and perhaps even fencing. This sharpens reaction time and hand/eye coordination. The bottom line is to diversify your training program and become well-rounded physically on the outside and learn stress-controlled on the inside.

Most people are vaguely familiar with the events of the 300 Spartans at Thermopylae. King Leonidas held off the Persian army for two days and struck a decisive blow against the invading army. Although Leonidas had help in the battle, he was still vastly outnumbered 20 to 1.

However, neither the odds nor the sheer number of enemy troops in front of him fazed him in any way. It even solidified his (and all Spartans) engrained traits of never surrendering or showing any form of weakness. Adapting this philosophy to your training and any actual event or competition will allow your mindset to mirror your ready-for-action body that you spent so much time conditioning and preparing for your modern-day battle. Of course, training can beat you both physically and mentally, but a never-give-up. A spartan mindset can help see you through it and make you much more robust in the process.

Everyone has their version of the “Hot Gates” during their struggles, in which unthinkable odds are stacked against them. As you train like a Spartan, think of Leonidas’s words when his army was ordered to lay down their weapons. His response, “Come and take them!” and the rest, they say, is history.