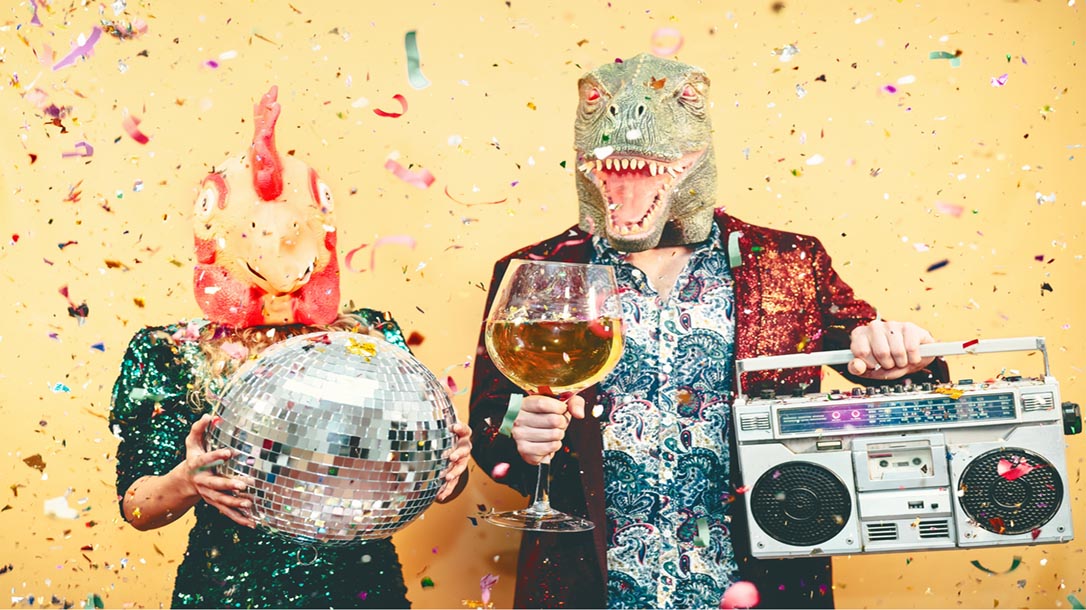 You were drunk on Christmas Eve when you announced you would host a kick-ass New Year’s Eve party in just a “week hence” (your words). The details are fuzzy, but you claimed it would rival stupid Doug’s party from four years ago, complete with a chocolate fountain, party favors “like buzzers and shit” (again, your words), and enough booze to put a whole frat house in the hospital. Yes, you exclaimed, this is your year.  Now all you need to know is how to throw a New Year’s Eve party that doesn’t suck.

It took most of the morning to realize your drunk counterpart’s mistakes, and your brief experimentation as an extrovert now causes your introverted spine to tingle. Plus, what have you got against Doug? It was a good party, and now yours has to be better. It has to kick ass, lest you become the laughing stock—well, more of—among your friends and family. Don’t worry, dear reader, you’ve come to the right place; getting people to come to our house, drink our liquor, and eat all of our food is our specialty.

How To Throw A New Year’s Eve Party That Rocks!

Assuming you have friends and they like you, getting them to come to your house should be easy, and if this were any other day, like Flag Day or Arbor Day, it’s a deal. But this is New Year’s Eve, and want to know how to throw the best party of the year!

Start with invitations. Forego the texts and eVite websites that will either go ignored or forgotten as soon as your potential guests see them. Instead, go old school and send out actual paper invitations in envelopes with postage stamps and a return address. Include the whens, wheres, and whys, and ask for an RSVP a few days before the event. Doing so will get people to commit and let you know the number of people to expect.

To lay the groundwork for your invitations several months earlier, you should make it clear to your circle of friends that there’s a special place in hell for those that don’t RSVP for parties and that no-shows should be kicked off the planet. That’s Emily Post shit right there.

Bring On The Party People

What people? Well, who do you like? Who do those people like? Do you have a hanger-on that can best be described as an a-hole douche? Don’t invite that guy. Did one of your friend’s friends accidentally knock grandpa’s urn off the mantle at your last party? Yeah, don’t invite that chick. Include on your list of guests you want to spend time with those who get you and those who mesh together as a group. Perhaps your militant feminist FB group of friends would clash with your Only Fans patrons, or your Star Wars LARPers won’t get along with your Star Trek model makers group. Choose your guests wisely, but it is also nice to be inclusive; as your mother suggested, you should invite everyone from your class to your birthday party, so no one feels left out.

Another drunk soiree in your cramped apartment won’t sound too palatable to many potential guests, so you might have to change it up this time if you want your party to be one of the legends. We’re not all made of money, so renting a penthouse in a fancy hotel or chartering a plane to Vegas for the night is primarily out of the question. However, consider obtaining an outdoor event-style tent replete with heaters and a dance floor (a 300-square-foot one with walls is only $116 at Home Depot). No space for a tent? You can charter a harbor cruise for the night, which will set you back about $40 per person (or more).

No? Okay, your house it is. Well, if it is a pigsty, give it a thorough going over, paying particular attention to the bathrooms and kitchen. Get some chairs as most people only like standing around some nights. And let your neighbors know you’re hosting an NYE shindig; they’d be less likely to call in a 415 if you invite them.

Keep A Budget For The Party

Speaking of money, don’t go broke trying to impress people. Sure, you want your party to be the kick mentioned above ass, but you also don’t want to run off the credit card debt or be unable to pay your mortgage because of it. Find a happy medium and put together a combination budget/wish list/priority list. You’ll put everything you want your party to have in one column. That might include monkey butlers, Dom Perignon champagne served in Waterford flutes, and a four-piece orchestra lilting softly in the background. Since diapers for monkeys are expensive, in the second column, write some alternatives. Instead of monkey butlers serving hors d’oeuvres, how about a couple of cheese trays from Costco? Instead of a four-piece band, a Bluetooth speaker on shuffle is better for your budget.

The critical aspect here is to throw a great party within your means. It’s only going to be a few hours of one night, so there’s no reason to regret spending the money you don’t have and then paying 30 percent interest on it for the next couple of years.

Ever been to a party without food and drinks? They don’t exist. Even interventions and funerals have food and beverages, so a large portion of your budget will be spent on fattening and drunkening your guests. This is your place to shine. For NYE, you’ll need champagne, as people will expect it. They won’t expect a bartender, which would take much of the pressure of providing mixed cocktails that most people want but need to learn how to make.

Chow: Likely, your party will start after dinner, so you’re not on the hook for a whole sit-down meal, but you’ll be expected to provide plenty of food. Drinking gives people the munchies, so having a host of finger foods on hand will satiate their appetites. If you’re keeping it simple and avoiding messy foods. There’s nothing like walking around with a spill on your shirt all night.

Guests expect food, drinks, and entertainment. It’s not enough that a new year is within a few hours reach. They will want something to do besides making small talk with boring people they’ve never met before. Consider some games or activities to keep them entertained until the ball drops.

Themes aren’t necessary or expected, but they can be fun with the right audience. If you have an outgoing crowd of revelers, you can push the limits of a theme, but remember, it’s not Halloween, so don’t expect people to come in lavish costumes. Keep it easy: A 60s hippy theme, everybody wears red or providing everyone with top hats, and Tierras can bring together a wide variety of people within a common thread.

Even if you don’t pick a theme (or don’t want one), you’ll have to liven up your space with decorations. Streamers, balloons, and NYE-labeled napkins and plates are easy and effective ways to shout NYE. Set up a lighted photo booth area for guests to take selfies and keep some fun NYE-themed props, like big glasses, hats, boas, etc.

Music and Lighting: Put together a playlist, especially for the night, and know your audience. Are they all about 50? Play a lot of 80s music. Are they uptight suburban moms? It would help if you hadn’t invited them, so play much 80s music. Basically, get your music sorted early by letting any of the music streaming services handle it for you. Just press play, and if you’ve got a musicphile on your guestlist, per her in charge of the sounds.

For ambiance’s sake, keep the lights low. Your ugly friends will appreciate the advantage if they’re looking to hook up while nobody looks good under LED lighting. Avoid candles (except in the bathroom) as they can get knocked over by drunken idiots, and consider some party lights if there is going to be dancing.

Party Time Is Over

Knowing How To Throw A New Years’ Eve Party that doesn’t suck also means knowing when to call it a night (or not). Frank Loesser wrote “Baby, It’s Cold Outside” with his wife Lynn Garland in 1944 and used it to signal the end of the party and that everyone should go home. Although your revelry will likely hit a crescendo just after midnight, you may want to devise a signal to let your guests know that they don’t have to go home, but they can’t stay there.

If you’re good, the food and liquor will be exhausted at just the right time, or you can have a place where people’s coats can be put out. If you want to be obvious, start cleaning up; it’s a universal sign for folks to vamoose. Then again, maybe you plan to sip champagne and gaze blurry-eyed at the first Sun of the new year crests the horizon; who are we to judge?

It’s your kick-ass party, after all.