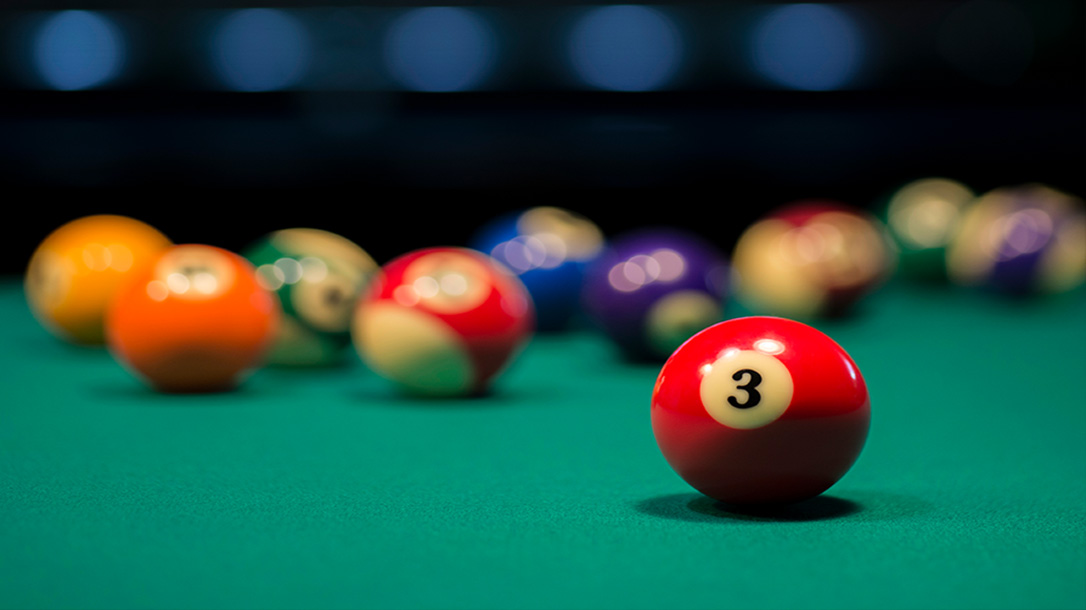 Whether looking to be the best in the pool hall or just not get embarrassed by buddies at the local bar, knowing how to shoot pool can be a great way to have some fun and hopefully separate some friends from a few bucks.

Many grew up playing the game to some degree, but not everyone can break and bank shots like Paul Newman in The Hustler. But no matter the game, a little practice and a set of overall basic skills can go a long way.

Know The Games And Know The Strategy

Those new to the game of pool should first learn the games and the strategies involved. Odds are that you’ve chalked up a stick at some point as a teenager. Maybe it was playing with your little brother on vacation. Your general strategy at that time may have been to just hit the balls as hard as possible. Watching the shiny colored spheres bounce around the table, only occasionally finding a pocket.

But there is plenty of strategy involved in the game of pool, from placement to shot selection to defense. Getting good at the game means knowing where and how to hit the cue ball – and how to keep your opponent from having a nice sht as well.

When it comes to playing pool in the U.S., a few games standout including:

● 8-ball – This is the classic “solids and stripes” game where one player tries to pocket half of the balls and the other player is responsible for the others. The first to pocket his solids or stripes then has to pocket the eight ball for the win.

● 9-ball – This game features plenty of shot making and comes with some interesting strategy. Players pocket the balls in order from 1 to 9 with combinations to pocket the nine-ball ending the game early if possible.

● Snooker – This classic English game has players pocketing 22 balls and earning points along the way. Keep pocketing balls to keep shooting, but avoid hitting the wrong balls or you earn a foul.

Working On Your Pool Skills

Now that the basic games are mapped out, it’s important to train just like in any other game or sport. “Rocket” Rodney Morris certainly knows how to shoot pool as well as plenty about perfecting his billiards game. He’s done just about everything in the game, from large winnings to major tournament victories like the U.S. Nine-Ball Championship and multiple Mosconi Cup titles.

Morris is also a member of the Billiards Congress of America Hall of Fame. When it comes to perfecting your game, Morris says learning the basics is the best place to start.

“The best thing, and this is what I was taught at a young age, is that the whole game is the cue ball!” he says. “If you master the cue ball, you’re going to get better and have less stress in your game. So for the youngsters (and beginners), I would definitely emphasize watching the greatest players with the best cue ball control. Not necessarily the best shot makers, because shot making will wane over time, but your cue ball knowledge never will.”

Learn to control the ball. Different scenarios may require softer touches and others may require more power and force. Learning to spin the ball can help with placement and defense. Morris advises plenty of practice and focus on the cue ball to get your game together.

Some Practice Ideas For The Pool Table

For Morris, those learning to shoot pool who want to be successful should practice and play often. He usually enjoys “playing the ghost” when training. This means you’re shooting balls as if you’re playing the perfect opponent, one who never misses.

A ghost drill often involves racking a certain number of balls, breaking, taking a ball in hand after the break, and attempting to run out. Players can also randomly spread the balls on the table and try to run out as if in the middle of a game. When a player successfully runs out, he’s beaten the fictional ghost opponent.

This method makes a player think about his own shot making even more as well as the defensive tactics needed to leave a great player the worst shot options possible.

Advice From A Pro

“I usually play the ghost in nine-ball or ten-ball when I practice because they seem to be the best games to help me get focused and they’re demanding enough, more so than eight-ball, where patterns are more important than shot making,” Morris says.

When finally breaking balls in a real game or local bar tournament, Morris also offers some key advice. When playing pool for real, it’s important to realize your limitations and focus on your own skills

“One of the best pieces of advice I can give, which was given to me after my first two years in the game, is to ‘play within yourself,’” says Morris, who also produces the upcoming Masters Cup tournament. “What that means is don’t do anything in a real match that you wouldn’t do in practice. Don’t have two different games. Always be true to yourself when you are deciding whether to go for a shot, to play defense, or whatever.”