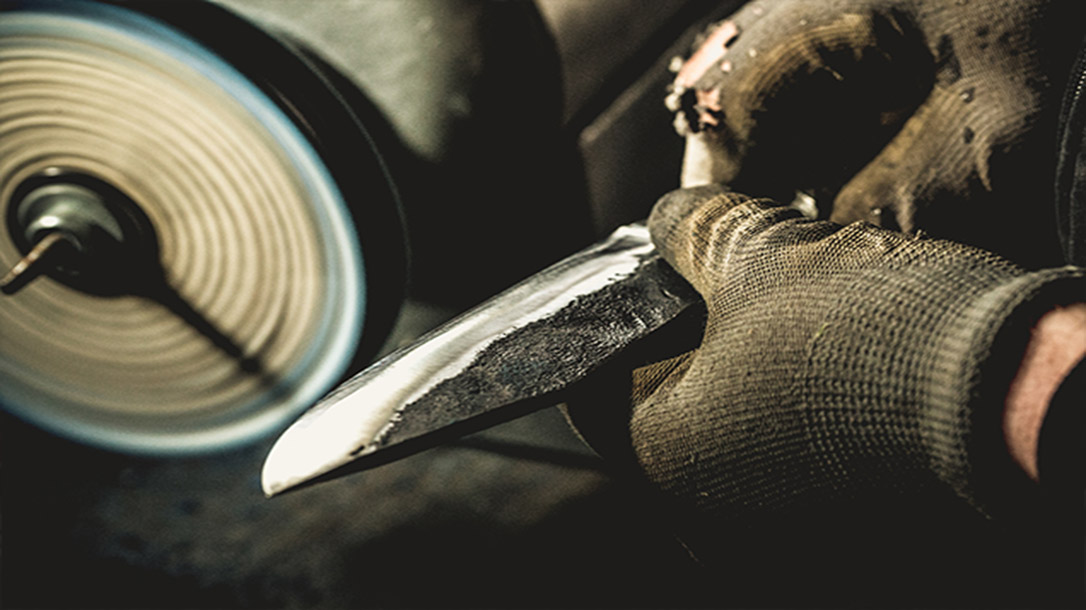 Use a knife for a long enough time and you’ll need to sharpen its edge. For the guy who buys a knife just to flick it open in front of his friends or fondle it while his favorite action movie plays, knife sharpening isn’t very likely. For those who use a knife to make a living or use one as a true cutting tool in the great outdoors or for everyday carry, sharpening is a reality that follows dullness.

How To Sharpen A knife

You know what another reality is; cutting yourself if you aren’t careful.  Years ago, if you wanted to learn to sharpen a knife, you found the ole’ timer sitting on the porch who would spit on a sharpening stone and swirl his knife around on it. A few swipes on one side and a few on the other, and with apparent magic, a sharpened edge was the result. Maybe that example didn’t play out for everyone or maybe we’re just exaggerating so we’re here to help you put a working edge back on your blade without slicing your digits our way.

​Different knife grinds (geometric cross-section of a blade) and different steels require different types of sharpening tools and techniques. To cast the widest net, we’ll focus on your typical folding knife you could find at a gas station, big-box sporting goods store, or those you will likely find for under $50 anywhere around the country. This is also the knife you’ll likely find in the pocket of most people instead of the super steel or custom ground knife that fetches hundreds of dollars.

Flat stones are more common for sharpening than high-end battery-powered or electric sharpeners which is why we’ll hone (no pun intended) in on those. You’ll find as you get into more exotic steels for your daily carry knife, you will need to use a more sophisticated stone impregnated with diamonds. These will cut better than standard stones and shorten the amount of time you need to work on your edge.

​Sharpening a knife requires abrading the steel along the edge. Steel is strong but abrasive agents (stones, belts, files) are harder. When a blade is drawn across the surface of the sharpener, friction removes steel and with enough passes and with the right angle, a wire edge is formed. The more aggressive the grit of the stone or abrasive, the more steel you can remove. In this process, the steel is essentially scratched and with finer and finer grits, a keener edge is formed as the steel is polished. A well-sharpened edge is one that has such fine scratches they are hard to see with the naked eye. The smaller the scratches, the less likely the edge will rust since scratches are pockets for moisture. To finish the sharpening process, the steel is honed on a mild abrasive or polishing embedded leather strop or with a ceramic rod.

​Just like a sharp knife is safer than a dull knife since less force is needed to use it, good sharpening stones and gentle pressure is safer than forcing and rushing the process. That is tip number one in not cutting your fingers. Tip number two involves using larger stones and manipulatives than the smaller compact ones for your tackle box or pocket kit. The technique is the same with both and you can decide which method works better for you. Unlike a lot of advanced and more expensive sharpeners with guide rods set at specific angles, you won’t have those luxuries when you take your knife to a stone.

​Starting with the flat of the knife against the flat of the stone, pick up the spine only as high as the blade is thick. Don’t get too hung up on specific angles since by hand and by eye, you won’t be able to notice a few degrees off in either direction.  You can either start at the ricasso or at the tip and you will slice at the stone the whole length of the edge. Not only is a larger stone safer for your fingers, but it is also easier to learn on a bigger stone than a smaller one.

Think of it like a fat Wiffle ball bat vs a narrow one. Working one side of the blade for a half dozen swipes transition to the other side. If you are wondering how or what you are doing, use a Sharpie marker to mark the sharpened edge to make sure you are touching up the right spots by thinning out the steel at the very edge. After six passes on one side and six on the other, you can work alternating sides in between each pass. As you work toward the tip or start with the tip, raise the handle of the knife slightly to follow the taper of the blade thickness.

The amount of pressure you should use on the stone is about the same as you would shaving your face. Throughout this process, you should swap out stones when you notice a distinct change in the pitch or sound the steel makes against it.  If you don’t have stones but you have a piece of leather or a mouse pad, you can use wet/dry sandpaper of varying grits. It is easier said than done but you’ll also notice the feel changes as the imperfections in the steel are worked out. The key to transforming dull into a great edge is consistency and care. Those very tips are the same that explain how not to cut yourself.

​If you followed the steps correctly, you sharpened the edge of your folder to where it resembles something more refined than when you started. To examine your edge, simply hold a flashlight in line with the edge and look for any bright sections that could indicate a flat spot. You can also use the barrel of the Sharpie marker to slice with the edge using just the weight of the knife. The knife should track along the Sharpie without skipping off. If you find a spot that needs some attention, you can address that spot or work the entire edge again. One of the most embarrassing ways to cut your finger is when you examine the edge of a knife. Remember, a sharp knife is a safe knife. A person who runs their finger WITH the edge of a blade will bleed.