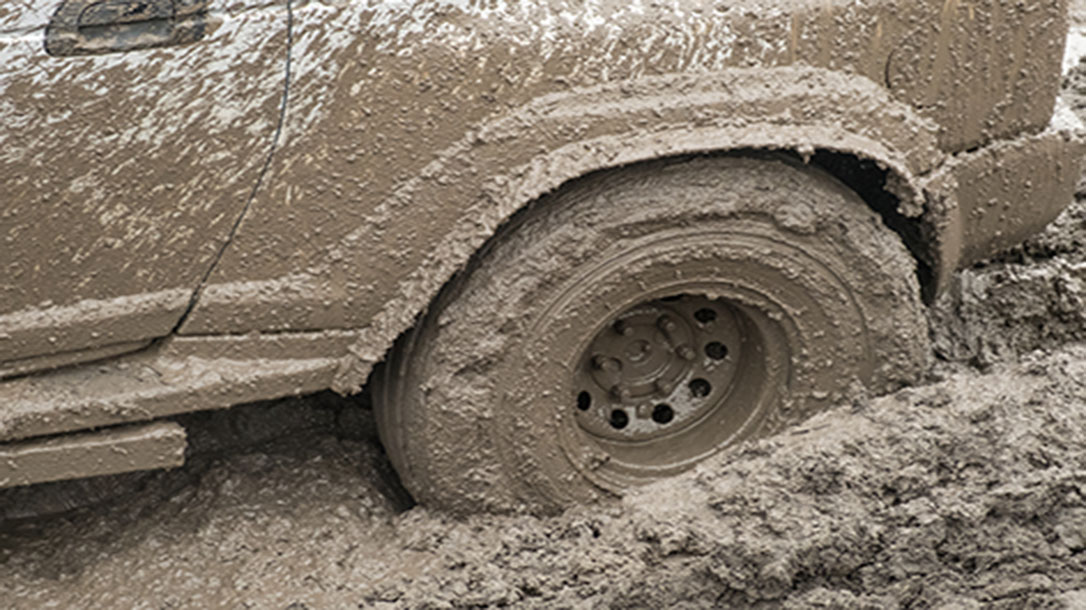 How To Get A Car Out Of The Mud: You Won’t Learn This In Drivers Ed

I grew up in a small town in Wyoming. I think the population when I was a kid was around 18,000 people. Not a one-stoplight town small, but definitely small. There is not a lot to do in small towns as a teenager. So you have to make your own fun. And what is typically surrounding a small town? Miles and miles of open land with dirt roads to go four-wheeling. I am talking about maintenance roads, two-tracks, and paths that hardly could be considered actual roads. So as a teen, my friends and I would take advantage of this vast wonderland of dirt. One thing that we learned the hard way was how to get a car out of the mud.

Which meant that countless times we had to walk miles back into town to get help. Not to age myself, but this was before cell phones were as common as they are now. Not surprisingly, we would sometimes get the itch to go driving in mud after a rainstorm. Or when the snow started melting in the afternoon. There would be so much mud that it was too tempting not to ditch a class or two to go four-wheeling. Until we got stuck in the mud. Then the walk of shame back to high school covered in mud became even more dire. Mainly because we tried to get back before the final period bell. That way at least we could get a friend to come to tow us out of the mud instead of our parents.

After one too many walks back to school, my friends and I started actually learning how to get a car out of the mud. There are some dos and some don’ts. We are going to cover them all so that you are prepared the next time you find yourself stuck in the mud.

What To Do When Your Car is Stuck in Mud

First and foremost, don’t panic. Then and this is very important – the gas pedal is NOT YOUR FRIEND. I know that your instinct when you are stuck in mud is just to ram that gas pedal down. Don’t. Just don’t. All that is going to happen is that you will spin your tires and dig in deeper. Not to mention revving the engine nonstop like that can cause damage to your car. Take a breath, whoosah, or whatever you need to do to calm yourself. You got stuck in the mud, it happens. Once you are calm and collected, assess the situation.

Are you stuck deep?

Is it just one wheel that is stuck or more?

If you have passengers with you, have them get out of the car. This is for multiple reasons. One being the lighter the car, the less it will sink into the mud while you figure out what to do. Also, they can help you by being your eyes and muscles outside of the car as well.

The first and most obvious thing to try is rocking your vehicle back and forth. To do this, if your car has an automatic transmission, put it in the lowest gear. If you have a manual transmission, put it in second or third gear. Then try to accelerate forward slightly. Followed by putting your car in reverse gear and doing the same thing. Do this continuously to see if you get any actual movement. If you have people with you they can help push in each direction. Be very careful to make sure everyone knows which way you are planning to go. Make eye contact and communicate. Also, listen. They are your eyes on the mud. Once you start rocking, do not spin your tires. If they start to spin, stop.

You tried to rock your car and it sort of works but you are still stuck. You may need to clear some space in the mud around your tires. To do this, you turn your steering wheel to the left and right to clear some space. You may also want to try and clear the mud from around your tires with your hands or a branch if you can find one. Bonus points if you have a shovel to do this. Be careful not to dig down and create a deeper hole. Once you’ve cleared space, attempt to rock your car again.

If the above does not work it is time to get creative. You are stuck in the mud because one or more of your tires lost traction. Your mission is to get it back. The first thing to do is use a floor mat, jacket, pizza box whatever you happen to have. You place them partly under and partly in front of your drive wheels. This may vary if you are front or rear-wheel drive. So again, assess the situation and determine where you need to put it.

If none of that works, it is time to think outside the box:

Lastly, no matter what method you try. If you get momentum. Do not stop until you have made it to solid ground. I learned this the hard way countless times. You think you are out of one mud hole. Only to create another hole right next to the one you just got out of.

Follow the pointers above and you should be good to go if you happen to get stuck in the mud the next time you go four-wheeling.