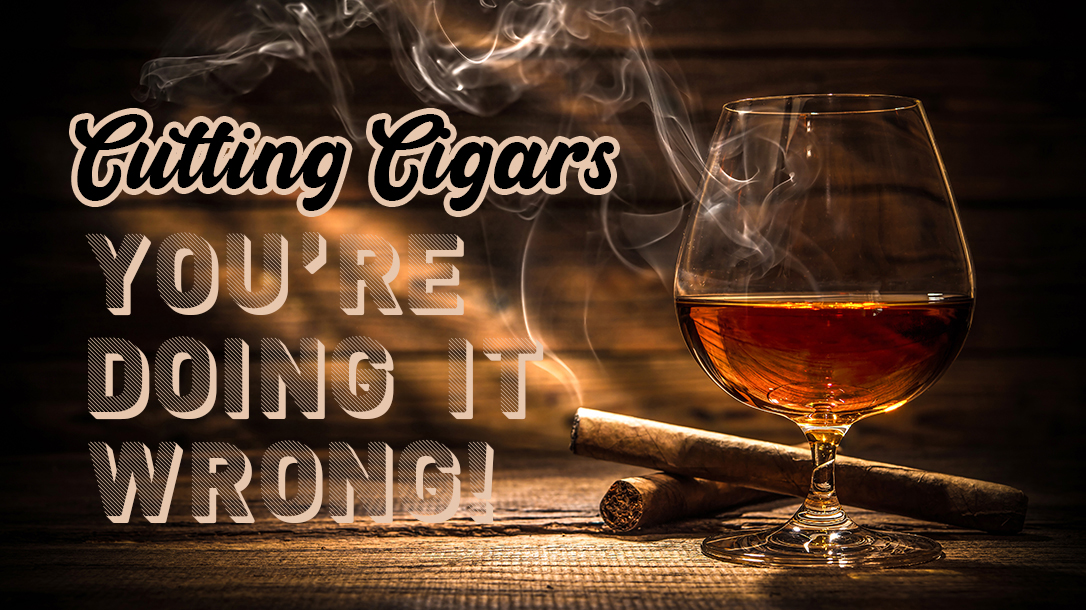 How to Cut a Cigar Properly for Optimal Enjoyment

For a select few, there’s nothing quite like the relaxation found in firing up a quality stogie, either by yourself or with friends, and just taking it all in. There is an entire subculture of cigar aficionados who utilize fresh cigars, proper storage, a clean cut and a specific lighting technique in order to take that tasteful first puff. Sure, you can go down to your local convenience store and ask them to grab whatever’s behind the counter, but going to an actual tobacconist that can point you in the right direction is an experience in itself.

If you take the time to seek out a real cigar shop, the person who works there should have a wealth of knowledge about what type of cigar, size, brand, body/flavor, storage, cutting and finally lighting are best for you. It’ll feel a little overwhelming at first, but like anything else, if you want truly to enjoy something, you have to understand it intimately.

How to Cut a Cigar

Whether it be alcohol, coffee or tobacco, you should start on the lighter side of things. Hence, this is why most people start enjoying adult beverages as mixed drinks. The same thing goes for coffee—how many people do you know who hate the taste of coffee, so they hide it with some chocolate-hazelnut-peanut butter creamer and five tablespoons of sugar? That’s not coffee, that’s a milk shake with a dash of coffee—but I digress.

With that said, you should still apply this similar way of thinking when you first dive into the cigar realm. If you come in heavy, so to speak, and immediately purchase what’s known as a full-bodied, “Churchill” size cigar, you’re going to be in for a rough ride. For the uninitiated, this type of cigar will immediately make your face turn green, and subsequent praying to the porcelain goddess will more than likely follow.

You want to look for terms such as “light-bodied,” and for the size, a “corona” or “robusto” will do. They’re both around 5 inches long. There are other niche-size cigars, such as the short stubs from a brand called Nub. They’re essentially extremely short cigars for those who enjoy the taste and experience but don’t necessarily have an hour or so to sit down.

Regardless, the smaller and lighter you go for your first experience, the better it’ll be. As you progress, you’ll find yourself venturing out and trying the darker and more “full-bodied” style of cigars that have a richer taste and take longer to smoke. Understand that there’s a process to fully enjoying a cigar; it’s not like pulling a Marlboro out of your carton and firing it up on your break. If you don’t take the time to enjoy, it could ruin the actual cigar.

The next big hurdle, after you’ve chosen your “stick,” is to figure out how to light the damn thing. From the neophyte’s perspective, a cigar may look as though it’s lit from the closed end, and your mouth goes on the open end. It’s anything but and actually quite the opposite. Your mouth goes on the closed end, and you fire up the open end. Before you light it, though, you’ll probably need to make an additional two purchases on top of the actual cigar if you want a quality experience.

The most obvious additional tool you’re going to need is a cigar cutter. Cutting a minimal amount off what’s known as the “cap” of the cigar is the idea. There’s a specific goal as to what you’re looking to acquire with the cut as well. You want to be able to get a full and easily inhaled “draw” with your initial cut of the cigar. You want some resistance, but not enough that you’ll actually have to put effort into puffing your stogie. The sharper the blade of the cutter, the cleaner the cut will be, and in turn, the more perfect your draw will be.

There’s an ample amount of options when it comes to what type of cut and cutter you want. It all comes down to personal preference and how much you’re willing to spend on your newfound hobby. For example, there are the V-cut, pinhole cut, puncture cut and straight (guillotine) cut. On top of that, take a look at double-bladed cutters or even what are known as “cigar scissors.” The world is your oyster.

OK, so now you’ve just cut your favorite Presidente cigar. You can just take that Bic lighter and go to town, right? Not exactly, and there’s a definite reason why. As a general rule of thumb, cigars are giant, smokable sponges of sorts. Take an Acid cigar, made by Drew Estate. They’re a niche brand that makes aromatic and herbal smelling cigars.

They are especially favored by those just getting into the cigar world whose taste palate is still developing. Compare it to people who started on light beer and worked their way up to a heavy, dark stout. Anyway, as a cigar connoisseur, you would never mix your Acid cigars with regular, nonaromatic ones in the same humidor. (A humidor is the device you’d store your cigars in to keep them properly humidified and ready to smoke.) The reason is that you would contaminate your other cigars with the herbs found in the Acid cigars.

The same thing goes for how you light the cigar. If you use a disposable Bic or gas station matches, the chemicals in the flame will adhere to the stick. You want to try a lighter that uses refillable butane—as it’s an unscented gas—or quality wooden matches. Before you take that initial puff, use the lighter or matches to toast the end, or “foot,” of the cigar. Don’t puff, just toast it a bit. This will allow the cigar to burn more evenly.

Remember, when smoking a stogie, take your time. Relax! The more you rush it, the faster you’ll get an acrid taste. Let the stick “rest” in between puffs. If you’re looking for recommendations, we’re fans of Gurkha Cigars. Now, get on out there and light up your favorite yard ’gar.

Pick up a copy of our magazine at OutdoorGroupStore.com and keep up with us on Facebook!