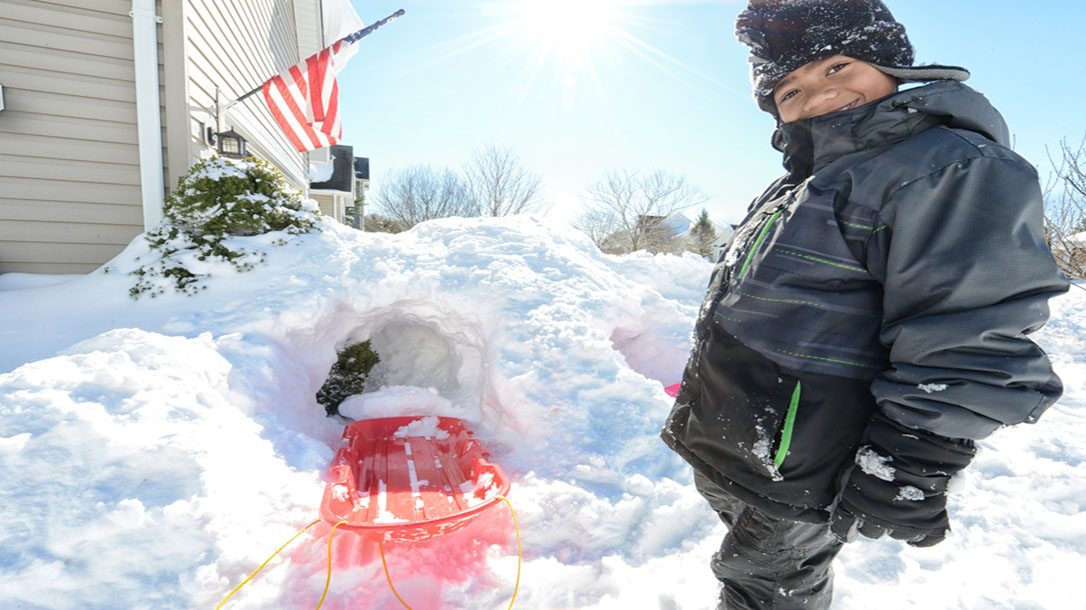 How to build a snow fort that will outlast neighborhood enemies has long been every American boy’s dream. We know this because the seminal method of building the impenetrable snow fort was first published in 1882. The Boy Scouts of America founder Daniel Carter Beard was the first to write about it.

Beard wrote “The American Boy’s Handy Book,” an in-depth explainer and instruction manual for nearly every outdoor activity a boy could need, from decoys and snares to snowball warfare and snow fortifications. The following is the only instruction on how to build a snow fort you’ll ever need.

How To Build A Snow Fort

Snowball combat begins and ends with a sturdy headquarters from which to direct the coming cold war, requiring the entire unit to construct effectively. First, choose a site that offers a full view of the area, usually the highest point of the grounds. Use the corner of a wall or fence if there’s no high ground.

Once a site is selected, it’s time to form the fort’s foundation. Its size depends on the size of your forces, and the snow fort should be too small than too large – it’s easier to defend.

The foundation will be made of large snowballs – think the bottom part of a snowman – in a 10-foot by 10-foot square. The corners of the square should face the most likely approaches of the enemy, allowing minimal exposure to incoming attacks and maximum potential for return fire.

Have the troops roll smaller snowballs into larger ones until they cannot be grown or moved anymore. Place them in the perimeter of the snow fort. With the perimeter in place, fill in the cracks between the large boulders with excess snow and pack it in along the bottom edge. It should be about four feet high.

Once the base is formed, use shovels to smooth the interior of the snow fort walls while making the exterior walls into a slant. In the end, the top of the base should be around two feet wide, and the bottom should be around four feet wide. With the wall in place, douse it with a bit of water to ice it up. A hard but slippery sloped surface will make it difficult for the enemy to infiltrate the fort.

Building a perimeter wall that size will use a lot of snow in the area surrounding the fort, which is a good thing. It will deny the enemy a source of ammunition when assaulting the snow fort. Continue using localized snow for further improvements and ammunition.

Learning how to build a snow fort is only the beginning, however. Once the fortification is finished, the fort’s defenders will need not only their own ammunition but a reserve supply and a means to get more, should the time come.

First, prepare snowball caches for use and place the ready-made snowballs at the corners of the snow fort. Next, prepare a mound of snow in the middle of the snow fort, one big enough to maintain the base flagpole. This also acts as a ready reserve of snow should the stored ammunition run out during combat.

With the defenses and ammunition stores in place, it’s time to think about going on the offensive. Hopefully, they won’t know how to build a snow fort correctly. If they don’t, chances are good those punks won’t know how to effectively assault one, either – but you will.

“The American Boy’s Handy Book” recommends breaking down barrels and reconstructing them into ammunition sleds. In 1882, there were probably a lot more wooden barrels around, but nowadays, there just aren’t. The barrels that are around are usually too valuable to be breaking down and repurposing anyway. But the concept of an ammunition sled is still a good one.

Luckily, many technological advances have happened in the past 140 years, so we can just buy an ammunition sled. Of course, that is if we don’t already have a sled in the garage.

The key components are the sled’s carrying capacity and a rope by which to move a sled loaded down with pre-made snowballs. This is an important step, because wars aren’t won by strategy and tactics. They’re won by logistics.

The Art Of Gentlemanly Snow Warfare

Author Daniel Carter Beard suggests rules for the game along with rank structure to fight the snow war. A captain is chosen, and if the forces are large enough, he should appoint lieutenants. Once the army is decided and ready, one-third of each army should be left to defend their respective snow forts. The rest are then dispatched as an attacking force.

Defenders of the snow fort can also make a move on the attackers by capturing the enemy’s battle flag. The first side to capture the enemy colors, either on defense or offense, wins the day.

The only banned weapons are iceballs or water-soaked snowballs. “No honorable boy uses them, and anyone caught in the ungentlemanly act of throwing such ‘soakers’ should be forever ruled out of the game.”

What if the enemy doesn’t play by the rules? It’s a question America has grappled with throughout the 20th Century and beyond. If all those punks want to do is chuck snowballs at your glorious fort and its brave defenders, learning how to build a snow fort right from the start has set you and your men up for success. You will have more than enough ammunition and protection to give any attacker a black eye with minimal risk to you.