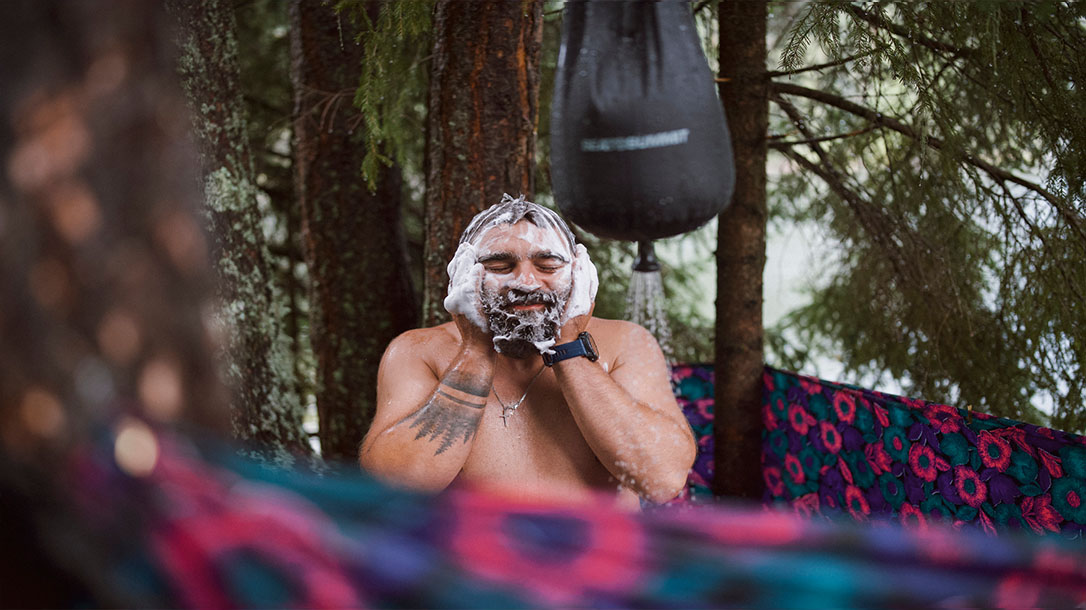 Ah, Mother Nature. For some of us, being the warm bosomy embrace of Mother Nature is just like taking a nap in the testing room at the feather pillow factory. We’re surrounded by beauty and perfection wrapped up in a soft fuzzy hug, like a big fleece blanket out of the dryer. For the rest, it’s a dirty hellscape of disgusting trash and human waste, and by the end of the day, they’re covered in trail dirt, sap, whatever it is that was for lunch, and ash from the fire ring, completely crusted over like a crumb doughnut and ready for a bath. Well, sweetheart, this isn’t the Four Seasons, so there’s no shower unless you brought one with you.

You could always take what my Boy Scout leader referred to as a whore’s bath, which amounts to a wet wipe and a splash of rubbing alcohol, if you brought any, making sure to focus on the Catholic areas: neck to nuts and pit to pit. But instead of finding out what rubbing alcohol does to some regions of the body, consider packing a camp shower next time. They’re lightweight, easy to set up, and inexpensive. Heck, you can make one if you’re feeling Martha Stewart.

Why Bathe In The First Place?


Uh, you’re disgusting, that’s why. You smell, and nobody wants to be downwind from you, much less share a tent. Ironically, sweat is odorless. What smells is the bacteria factory growing on your dirty skin, munching away at proteins and creating acid, which stinks. It’s called bromhidrosis (pronounced bro, I’m hideous or something), and when your apocrine glands—the smelly ones found in the armpits and groin area—turn on the waterworks, it’s time for a shower.

Are there medical reasons why you should bathe or health concerns? Not really, but it has been proven that dirty hands spread diseases and infections, so you can imagine what dirty bodies can do, right? Dr. Amy Zach at the Cleveland Clinic says, “Bathing cleans your skin, helping you avoid irritation, inflammation, and sores caused by dead skin cell accumulation. The bacterial and fungal load from contact in your environment can also accumulate, increasing the risk of infection.” Additionally, bathing can improve your mental health (how awesome do you feel when you’re in a hot tub?), it can soothe muscles and joints after a hard day at work, and bathing has been proven to aid in healing wounds.

Camp showers have become a popular accessory for long-term campers and off-roaders who like to get as clean as they like to get dirty. There are numerous styles and types available, but all the store-bought models boil down to one thing: They’re a black bag full of water that you hang in a tree and wait until the sun warms them enough to keep little George from shriveling up “like a frightened turtle.”

Coghlan has a five-gallon solar heated camp shower that will run you about $12 from Dick’s Sporting Goods, and you can find the same thing from Ozark Trail at Walmart for the same price. The black plastic absorbs heat from the sun and warms the water on each of them. Of course, suppose you feel like stepping up in quality and quantity. In that case, RisePro (you’d think it’d be RinseProbut, it’s not) offers a 10-gallon unit with a broad shower head and a temperature gauge, so you know what you’re getting into before you turn the nozzle. However, considering that 10 gallons of water weigh about 83 pounds, you’ll need help heft that over your head and a strong branch on which to hang it. However, it’s only about six bucks more for a better shower.

A Top Notch Piece Of Equipment

For those dedicated to being squeaky clean during camp, consider the Road Shower 4L from Rhino Adventure, a 10-gallon shower that mounts on your rig’s roof rack and is heated by the sun. Made from aluminum, it is said temps can reach well over 100 degrees, but it’ll set you back about $700 for their biggest one.

Feeling a little bashful lathering up your nether regions in the wild woolies, you may consider some self-esteem workshops, becoming a never-nude, or you can include an enclosure around your hanging solar shower. These usually come in the guise of a foldable pop-up privacy tent and can be had from most camping supply stores and online at Amazon, etc. What’s extra is that you can also use them to keep prying eyes away from your latrine.

If 12 clams are too much to fork out to ensure you don’t cause your fellow campers to recoil in disgust at your stench, you can consider making your camp shower. There are a dozen different ways of doing it, from suspending a sturdy bag full of water in the sun until it gets warm—similar to the store-bought showers above—to building an airtight, black six-inch PVC tube to attach to the side of your rig so it can hold water.

An easier way is to get a clean pressurized pesticide canister and fill it with water. The pressurized water from a few pumps on the handle makes for an excellent spray and will heat just as well if left in the sun. The best thing about this method is that you don’t have to suspend the whole thing above your head; hang up the nozzle, and you’re ready to soap up.

You are clean, you feel clean, and your body probably squeaks when you walk, but most importantly, to your fellow campers, you smell clean. There’s nothing better than climbing into a sleeping bag at the end of an eventful day after a nice warm shower.