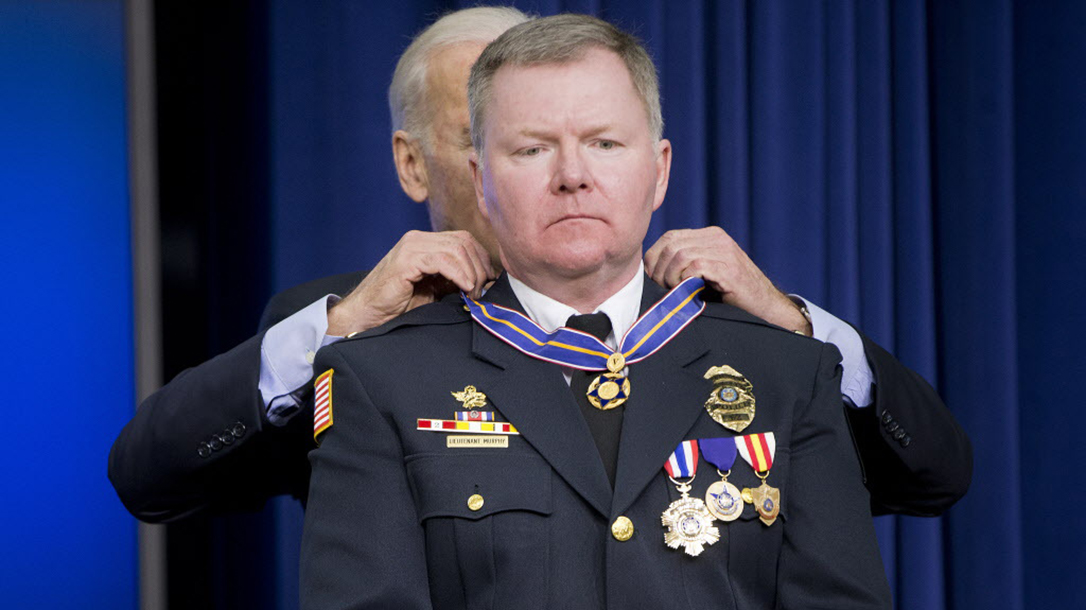 Vice President Joe Biden awards the Medal of Valor to Lt. Brian Murphy, from the Oak Creek, Wis., Police Dept., Wednesday, Feb. 11, 2015, during a ceremony in the Old Executive Office Building on the White House Complex in Washington. Medals were awarded to public safety officers who have exhibited exceptional courage, regardless of personal safety, in the attempt to save or protect others from harm.
(Photo by AP Photo/Pablo Martinez Monsivais)

On Aug. 5th, 2012, a domestic terrorist in Oak Creek, Wisconsin, began a reign of terror on peaceful worshippers inside the local Sikh temple. The crazed man had already killed six people beforehand. He was currently hunting for more people to harm, as Lt. Brian Murphy, a 21-year veteran of the Oak Creek Police Department, arrived on the scene.

As soon as Lt. Murphy exited his vehicle, the shooter ran outside to confront him. They both fired simultaneously, but unfortunately the killer’s bullet found its mark. Shot in the face, Lt. Murphy took cover behind a car, temporarily losing sight of the target. Knowing he was still in the fight and needed to act, Murphy stood back up to locate the shooter. The killer had outflanked him, though, and mercilessly fired more rounds into the wounded officer.

Lt. Murphy continued to fight with what little strength he had left until another officer arrived at the scene and started drawing fire away from his wounded partner. Eventually, the crazed man took his own life and ended the bloodbath.

As Murphy was transported to the hospital, his chances of survival looked dim. Many of the shots hit his extremities, and some had been aimed toward his vital organs. What saved Lt. Murphy’s life was his Armor Express ballistic vest. None of the rounds penetrated his chest, and now this hero has a second chance at life due to proper self protection.

Skillset: Brian, thank you for taking the time to answer our questions. Your story is truly miraculous and inspirational. It’s an honor to feature a man of such strong will and determination. After being shot multiple times in the face and body, was there any time you thought to yourself this was the end?

Lt. Murphy: The only time that I felt in trouble was when the last shot hit me in the back of my skull. My head felt like it exploded and I was knocked flat. It took me a few minutes to regain my bearings and crawl out to where the other officers could see me.

Skillset: Tell us about the gear you were wearing that saved your life.

Lt. Murphy: I was wearing an Armor Express Quantum Level IIIA vest. I had done research on the company and oversaw purchasing vests for our department. After seeing how invested the company was in saving the lives of law enforcement officers, the choice was easy.

Skillset: Regarding the shots that hit your vest, was there any penetration through the armor?

Lt. Murphy: I was hit in the chest, the side and the upper back; fortunately for me, the vest worked perfectly. No rounds entered the vest. As a matter of fact, the last round — the one that went into my skull — skipped off the vest due to its trajectory and the curvature of the armor around my shoulder and back. That round skipped under the first and second sheets of material for only two inches, but even that small amount slowed its velocity enough that my skull wasn’t fully penetrated. Those two inches of material saved my life.

Skillset: What type of weapon did the shooter have and at what distances was he firing?

Lt. Murphy: The shooter had a Springfield XD 9MM. He used Federal Premium 147-grain jacketed, hollow-point rounds. The first shot was from approximately 40 yards away, one handed and over his shoulder, while running away from me. I don’t think that shot is repeatable again — Murphy’s Law, I guess. The remainder of the shots were fired from approximately six to 10 feet away.

Skillset: What would you say to officers who choose not to wear their body armor because of added weight or discomfort?

Lt. Murphy: I would simply say this: The vest only works if you wear it. Before you go to work your next shift, write a letter to your loved ones explaining that you won’t be coming home again — ever. Explain that being more “comfortable” was more important than living. The vests made today are lighter, more flexible and more comfortable than ever before. There is no excuse.

Skillset: It’s easy to say the words “Never give up,” but you’re proof that every day is a gift worth living and fighting for. What about who you are allowed you to survive this attack and its aftermath?

Lt. Murphy: I think being able to maintain composure through the entire incident helped me tremendously. It helped me make decisions, avoid panic and even kept my vitals in check after being shot. I always trained as hard as I could, and I put myself through as much stress as I could beforehand, all the time building resiliency. Growing up in Brooklyn and being a Marine played major roles as well.

As a society, we sometimes lose sight of what’s really important. There are many uniformed heroes who walk among us everyday. Protective vests are specifically built for our men and women in blue. They fill a crucial need, and we appreciate Armor Express for answering the call. If you’re ever fortunate enough to meet an officer like Brian Murphy, take the time to say thanks for his or her service.

If you would like to learn more about warfighters and heroes like Brian Murphy, check out our podcast Skillset Live!  Get in on the conversation on our social media pages or pick up a back issue of Skillset at OutdoorGroupStore.com!