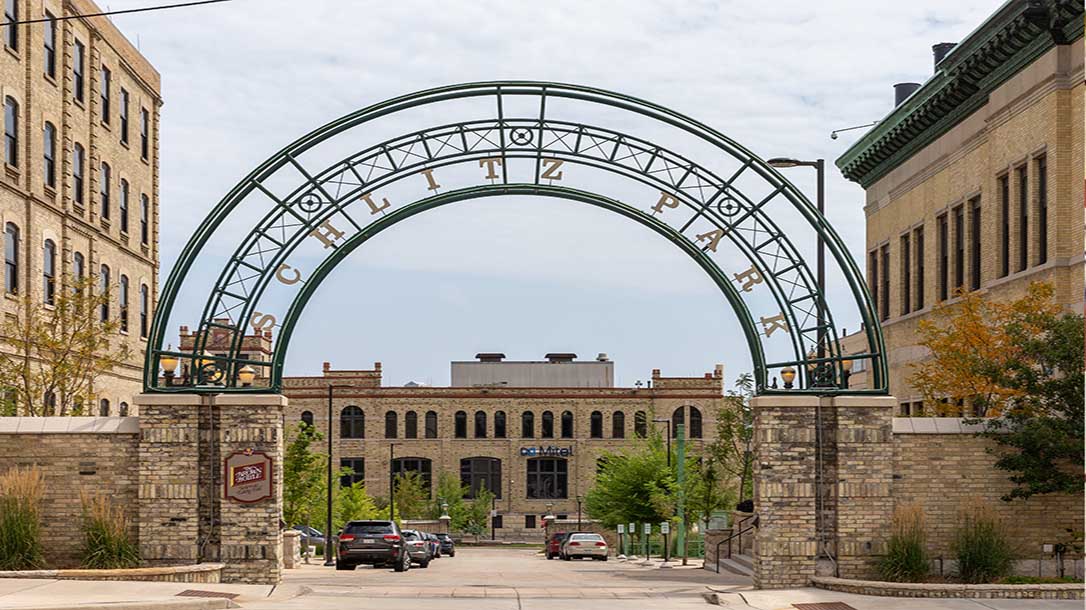 The Fall Of Schlitz: How America’s Top Beer Became A Joke

Milwaukee, Wisconsin, is known for many things, like rocker Alice Cooper, cannibal sandwiches, and beer. So much beer, in fact that its baseball team is called the Brewers. Beer nostalgia, a love of old brews, is strong in Milwaukee. But there’s one beer that “made Milwaukee famous” that we don’t hear about so much anymore, and when we do, it’s usually the butt of a joke.

Somewhere between the 40s of Icehouse and Steel Reserve at your local gas station’s cheap beer cooler, you might find a tall can of Schlitz beer, a beer that seems out of place, given its old-timey logo. That old-timey look isn’t a marketing ploy because this is not your daddy’s beer – it’s more likely your granddaddy’s. Or his dad’s.

There’s a good chance both of them knocked back a few Schlitz in their day because that cheap 40 was America’s top beer, and the contest wasn’t even close. It wasn’t the communists, a beer shortage, or even inflation that brought it down. It was a couple of empty suits trying to save a buck.

Schlitz Beer was a quintessential American success story. Bookkeeper Joseph Schlitz emigrated to the United States in 1850 and began managing Milwaukee’s Krug Brewery. In 1856, August Krug died, so Schlitz married his wife, took control of the brewery, and slapped his name on it. Don’t pretend like you wouldn’t.

Krug was a Bavarian who brought the Bavarian style of beer-making with him to the United States. Any beer fan who’s never had a beer in Bavaria should add it to their bucket list. Then they’ll understand. Within a few years, after Schlitz took over, the same beer became one of the top beers in Milwaukee, a city full of beers. It was a testament to how good Schlitz beer really was.

When Krug’s nephew, August Uihlein, turned 16, he also began working at the brewery, which was a good thing because Schlitz died in a shipwreck in 1875. When Uihlein and his brothers took over the brewery, they kept the name Schlitz because it was easier for Americans to pronounce, which was probably a good call.

For the next few decades, Schlitz only grew. It not only dominated the industry but advanced the art of brewing and selling beer on a massive scale. At a time when beer was sold in clear glass bottles, allowing sunlight to spoil the flavor, It was Schlitz who began selling beer in brown glass, preserving flavor.

It also dominated the competition. Until 1902, Pabst could claim it was America’s largest brewery. After 1902, the largest was Schlitz. When Prohibition forced Schlitz beer to sell non-alcoholic beverages, they dominated that too. A decade after Prohibition ended, Schlitz was the top-selling beer in the country, forcing Budweiser to abdicate its throne as the “King of Beers,” a title it wouldn’t wrestle back for decades.

King Of Beers Is Unthroned

Schlitz enjoyed its reign as America’s top beer until the 1950s when the Uihlens began to fix what wasn’t broken, which was the beginning of the fall of Schlitz. Like the decline of so many great brands, cutting costs would lead to its downfall. In the late 1950s, it fell to the number two spot in America.

By 1967, August Uihlein’s grandson Robert was in charge of Schlitz. To get more beer from the same brewing equipment, Schlitz began gradually replacing its malted barley with corn syrup. Next, the brewer started using hop pellets instead of fresh hops because pellets were cheaper. It wasn’t a huge change, but it was the first step in accepting lesser quality.

Uihlein also changed how Schlitz was fermented. Instead of traditional methods used by Bavarian brewers, it began using a high-temperature process. Since Schlitz was also aged less than its competition, the beer would form a haze when refrigerated. To combat this, the company began adding silica gel to the beer.

When it looked like the FDA would force breweries to list their ingredients, Uihlein was forced to swap that out for a chemical agent that would be filtered out before bottling so that the public wouldn’t find out about the silica gel. When this agent, called Chillgarde, was added to the mixture, it formed what customers described as “snot” floating in the beer.

The Schlitz was hitting the fan, and the fans were unhappy about it. Schlitz quietly recalled the snot beer, costing the company $1.4 million. Schlitz lost its coveted second-place spot, and Robert Uihlein died of cancer. Then came the light beer craze. Miller Lite and Bud Lite entered the beer market in the 1970s with an explosion in popularity. To keep up, Schlitz launched Schlitz Lite with an ad campaign best described as “Drink Schlitz Or I’ll Kill You.” It didn’t work.

Schlitz was in freefall, even though America’s top beer returned to its original formula. It was soon operating at such a loss that by 1980, it was bought by Stroh for $500 million. But Schlitz was so poorly-run that it took down Stroh too. By 1999, Stroh and Schlitz were both acquired by Pabst. Robert Uihlein’s cost-cutting strategy in favor of short-term profits is now known as “the Schlitz mistake.”

Instead of just destroying a once-great beer, he also destroyed the Schlitz brand and its reputation among consumers. That’s why this formerly mighty giant of Bavarian beer-making is relegated to gas stations, shelved somewhere between Olde English and King Cobra.